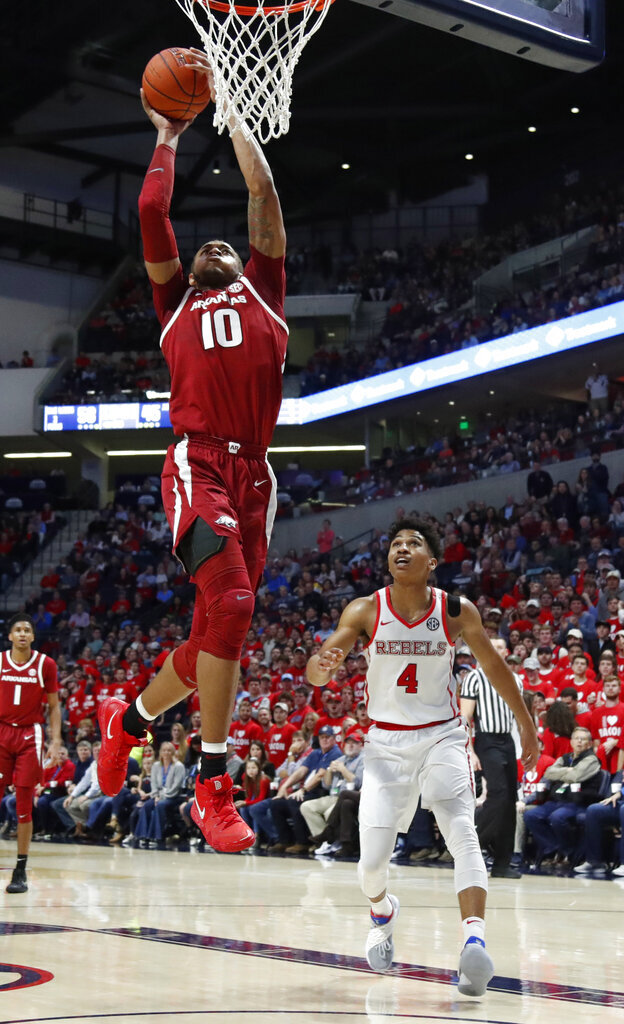 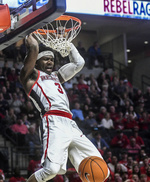 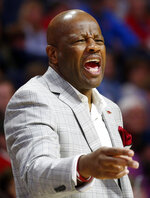 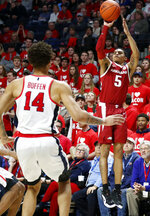 OXFORD, Miss. (AP) — D.C. Davis played a grand total of 16 minutes last season, yet there he was on Saturday, leading a fast break opportunity during a crucial portion of the second half in a key conference game.

The former walk-on spied Terence Davis streaking toward the rim and let a high pass fly. It was perfectly placed and Davis grabbed it in midair, slammed it home and the 18th-ranked Rebels were well on their way to an 84-67 victory over Arkansas at The Pavilion.

The Rebels' stars had good games against the Razorbacks.

Breein Tyree scored 22 points and Terence Davis added 18 in a game the Rebels never trailed. Ole Miss also got huge production from role players: Bruce Stevens scored 14 points — including 10 in the second half — Dominik Olejniczak added 13 points and D.C. Davis had seven points and four assists in his first start of the season.

The surprising Rebels — winners of 11 of their last 12 — keep finding new ways to win.

"I've got so much love for D.C. and I'm so happy for him because he puts in so much work," Tyree said. "He got a great opportunity to show it tonight and really he's been playing well the whole season."

Ole Miss (14-3, 4-1 Southeastern Conference) pushed out to an 11-point lead by halftime and had a comfortable advantage through most of the second half. The Rebels had a 40-31 rebounding edge and helped force 17 Arkansas turnovers to bounce back from their first league loss earlier in the week.

"We've had some great wins, but that was probably our best win of the year," Ole Miss coach Kermit Davis said. "Just the response after losing your first league game."

Arkansas (10-7, 1-4) has lost four straight games since winning its conference opener. The Razorbacks were led by Keyshawn Embery-Simpson, who scored 16 points. Arkansas coach Mike Anderson said his team made some good adjustments to get back into the game early in the second half, but couldn't keep the momentum.

Ole Miss was in control from the opening tip, jumping out to an 11-2 lead in the opening minutes. The Rebels got some unexpected early production from Olejniczak, a 7-footer who poured in 13 points on 5 of 5 shooting from the field before the break.

Terence Davis made a 3-pointer at the buzzer to give the Rebels a 46-35 halftime advantage.

Arkansas: It was another frustrating game for the Razorbacks, who are losing ground in the SEC race in a hurry. Arkansas struggled with turnovers and didn't take advantage of Daniel Gafford's 6-foot-11 presence down low. The team's leading scorer this season had just nine points.

"We've got to play better for longer periods of time," Anderson said.

Ole Miss: It's a nice recovery for the Rebels, which lost their first conference game to LSU earlier in the week. The Rebels continue to get good production from role players, including Olejniczak, Stevens and guard D.C. Davis, who played more minutes than usual since starter Devonte Shuler was limited with a foot injury.

"Coming off a loss, you never want two in a row," Tyree said. "We had a bad taste in our mouths from LSU, we knew we could have played better, and we wanted to come out and show the fans that we're still here and still a high-level team."