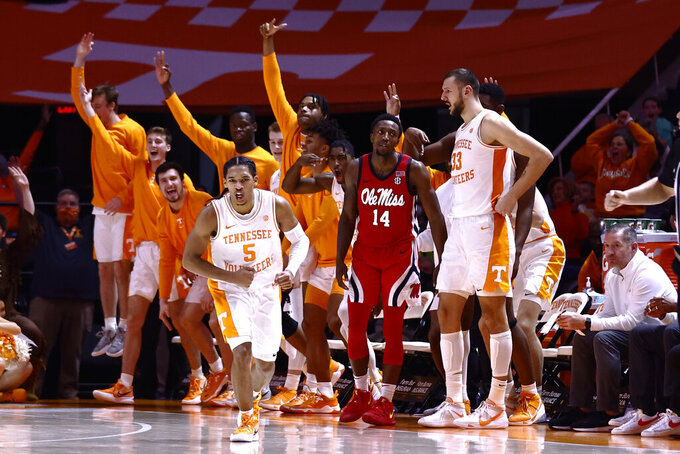 Tennessee guard Zakai Zeigler (5) and the bench react to his game-tying shot during an NCAA college basketball game against Mississippi on Wednesday, Jan. 5, 2022, in Knoxville, Tenn. Tennessee won 66-60 in overtime. (AP Photo/Wade Payne)

The junior guard hit two critical 3-pointers in regulation and another in overtime to rally No. 18 Tennessee to a 66-60 win over Mississippi.

“I’ve been confident in those shots,” he said.

Vescovi led the Volunteers (10-3, 1-1) with 17 points in a Southeastern Conference struggle. Tennessee never led in regulation but outscored Ole Miss 15-9 in the extra period.

Vescovi said he missed a shot Dec. 7 in a five-point overtime loss to Texas Tech that really bothered him. But one of Tennessee's assistant coaches told him every player has to go through moments at rock bottom.

Tye Fagan had 23 points to lead the Rebels (8-5, 0-1). Down five players — two injured and three in COVID-19 protocol — Mississippi started strong but couldn’t hang on.

“I told our guys that nobody has any kind of pity going through COVID or injuries,” Davis said. “Just go out there and play.”

The Rebels led 8-0 before Tennessee finally scored 7:40 into the game. The Volunteers missed their first 10 shots and opened 1 for 15 from the field. Ole Miss led by as many as 12 in the first half.

“We started with three turnovers (the Rebels) had nothing to do with,” Tennessee coach Rick Barnes said. “We got hesitant. When you're hesitant, you have a hard time shooting the basketball.”

Mississippi committed 27 turnovers and Tennessee made 17 steals. Both were highs for the Barnes era.

“Our inability to take care of the ball (was significant),” Davis said. "Tennessee climbed into us. It was a physical game both ways.

“It was strictly a turnover game. We couldn't get shots off.”

“The defensive numbers tell the story,” Barnes said. "We stayed locked in on defense really good. It was an awful night on offense and we still won the game.

“We've got to get tougher mentally. When things aren't going your way, you've got to believe in your training. We have to shoot like we could make it. We weren't very good but ... good teams win games like these.”

Mississippi: The short-term ramifications of Ole Miss' injury and illness problems should be minimal. But the Rebels must find a way to make up for the season-ending loss of Robert Allen (knee surgery) and overcome the lower-back issues that have caused leading scorer Jarkel Joiner (14.8 points per game) to miss time. ... Eric Van Der Heijden, Grant Slaten and John McBride missed the game while in COVID-19 protocol.

Tennessee: COVID-19 impacted the Vols’ previous game, a five-point loss at Alabama, where they were without Fulkerson and Chandler, their freshman star. Getting them back for this one gave Tennessee a comfort level it hopes to maintain.

Mississippi: Ole Miss will try to get healthy in a hurry in order to be at full strength against rival Mississippi State at home Saturday night.

Tennessee: The Vols have a tough game on the road Saturday when they visit No. 21 LSU.