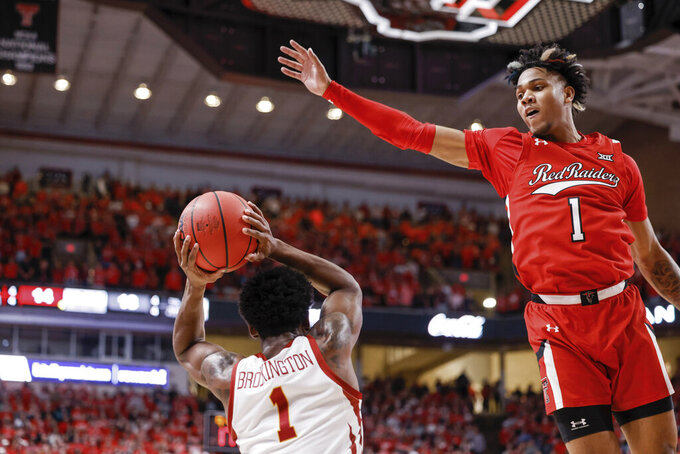 LUBBOCK, Texas (AP) — Kevin Obanor and No. 18 Texas Tech got physical with No. 15 Iowa State. The Red Raiders had some reinforcements this time.

Two weeks after the Red Raiders lost at Iowa State with only seven healthy players, Obanor scored 13 of his 15 points with several putback baskets in Texas Tech's strong second half for a 72-60 victory Tuesday night.

“They're a very aggressive team,” Obanor said, noting that Tech struggled early shooting from outside. “Just the IQ that we all had, we got in the bonus I think at the 10-minute mark, and just keep attacking, keep driving.”

Texas Tech (14-4, 4-2 Big 12) used a dozen players this time, including starters Kevin McCullar and Terrence Shannon, who missed the first meeting with injuries while others were out because of COVID-19 protocols.

“Had a lot more tools in our toolbox, so that made it better for me, and I thought it made us stronger on defense,” Red Raiders coach Mark Adams said. “I thought we played one of the best defensive games we’ve played all year, and against a great defensive team. ... I was excited to see our guys respond and how hard they played.”

Iowa State had three post players foul out — that trio playing only a combined 37 minutes. The Red Raiders made 29 free throws, 25 in the second half.

“They just out-physicaled us. They played a lot harder than us," Iowa State guard Caleb Grill said. “That’s just something we haven’t had happen to us all year.”

The Cyclones (14-4, 2-4) were within 29-28 when Gabe Kalscheur made a 3-pointer with 17:11 left. But then Marcus Santos-Silva hit two free throws before Obanor had the first of his three putback layups in an 11-2 run that gave Texas Tech its first double-digit lead — 40-30 on a free throw by Obanor after being fouled on his last putback.

“Felt like we were a step slow defensively. We weren’t quite as physical on the basketball,” coach T.J. Otzelberger said. “I felt like tonight we got hit first in every area, and were back on our heels, a step slow and behind the play, and gave them a great advantage in a lot of areas.”

The Red Raiders got their third consecutive victory against a ranked opponent. Since the 51-47 loss while short-handed at Iowa State, they have won four of five games. That included back-to-back wins over top-10 teams Kansas and Baylor, though they were coming off a loss at unranked Kansas State on Saturday.

Texas Tech has four wins overall against Top 25 teams, matching Iowa State’s season total that, going into Tuesday night, was tied with No. 11 Villanova for the most in the country. The Red Raiders also beat then-No. 13 Tennessee at Madison Square Garden on Dec. 7.

Iowa State: The Cyclones have played ranked opponents in five of their first six Big 12 games, which came after they won their first 12 games under first-year coach Otzelberger. ... The 14-3 start was their best since having the same record in 2014-15, when they also lost their 18th game at Texas Tech.

Texas Tech: McCullar missed two games with an ankle injury before returning for the Baylor game, and Shannon missed six in a row with a lingering back issue. Shannon made his first start since Dec. 14. He missed the wins over Kansas and Baylor before playing 18 minutes off the bench Saturday at Kansas State.

In the first half, Iowa State had a 22-20 lead after McCullar’s turnover — a steal by Grill that led to a layup by George Conditt with 4:27 left. A few seconds later, Conditt was called for his third foul and McCullar made both free throws to tie the game.

The Cyclones then missed their last eight field goal attempts before halftime, though they did regain a 23-22 lead on a free throw by Robert Jones before a short floater by Williams put Texas Tech ahead to stay.