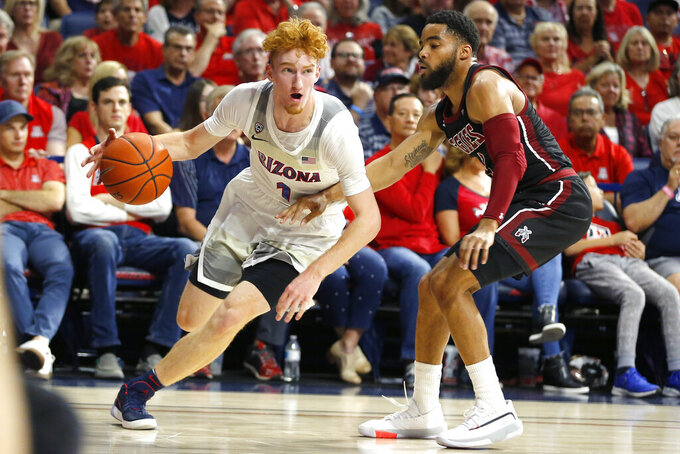 The rest of the college basketball world is paying attention now, too. Not bad for a player who didn’t get the same acclaim as freshman teammates Nico Mannion and Josh Green.

Zeke Nnaji did not miss a shot for the second straight game while scoring 19 points, Jemarl Baker added 16 points and No. 19 Arizona rolled over depleted New Mexico State 83-53 on Sunday.

“Zeke’s off to a really good start,” Arizona coach Sean Miller said. “You didn’t hear his name as much maybe before the year as some of the other guys we have here, but for a four-star recruit, he’s doing exceptionally well.”

Arizona (4-0) took advantage of the short-handed Aggies (2-2) from the start, scoring the game’s first 10 points and using another big run to lead by 22 at halftime.

The Wildcats were at their free-flowing offensive best, shooting 53%, and shut down a New Mexico State team missing three key players.

“Even people who are playing have injuries,” said New Mexico State’s Trevelin Queen, who had 12 points. “Even when we’re full strength, we’re still going to face adversity, but I feel like we’re stronger when everyone is healthy, but we can’t do anything about it.”

Baker provided Arizona with a nice lift off the bench with his confident shooting and Mannion added 15 points.

Nnaji dominated the first half before New Mexico State started collapsing on him in the second.

The 6-foot-11 freshman made all seven of his shots after going 8 for 8 against San Jose State and is 32 for 38 in four games this season. He’s made 17 straight shots, dating to the second half of last Sunday’s game against Illinois.

Outside of a Dec. 14 game against No. 8 Gonzaga, Sunday’s game against the Aggies was expected to be the Wildcats’ biggest remaining test before the Pac-12 season starts.

One problem: New Mexico State came to the desert short-handed.

The attrition hurt the Aggies at the start against Arizona.

New Mexico missed six shots and had two turnovers before making its first shot 5:20 into the game.

The Aggies shot 8 of 26, had 12 turnovers and were the latest team unable to stop Nnaji, who had 15 points and made all seven of his shots in the first half.

“They’re a lot bigger than us, stronger, more athletic, so it did kind of bother us,” said Jabari Rice, who led New Mexico State with 14 points. “We just have to play harder, play better and get off to a better start.”

New Mexico State might have had a chance to push Arizona at full strength. The injuries made that a near-impossibility.

Arizona did not get the test it expected due to New Mexico State’s injuries, but it still kept up its high level of early-season play.

Baker had a quiet start after transferring from Kentucky, scoring 20 combined points the first three games. He played confidently against New Mexico State, hitting 6 of 9 from the floor and 4 of 6 from 3-point range.

“Felt like a rhythm, just from warmups,” Baker said. “People were giving me the ball when I was open and I wanted to do everything I could to be aggressive and help the team win.”

Mannion spent most the afternoon trying to fight through New Mexico’s aggressive defense and the occasional trash talk by the Aggies’ guards.

Mannion plays with a fiery intensity and it boiled over in the second half, when he was called for a technical foul for trash talking New Mexico’s Shunn Buchanan after a made basket.

“I don’t think he really wanted to pick up a technical as much as the guy was really challenging him,” Miller said. “He met the challenge. Sometimes that happens. He’ll learn from it.”