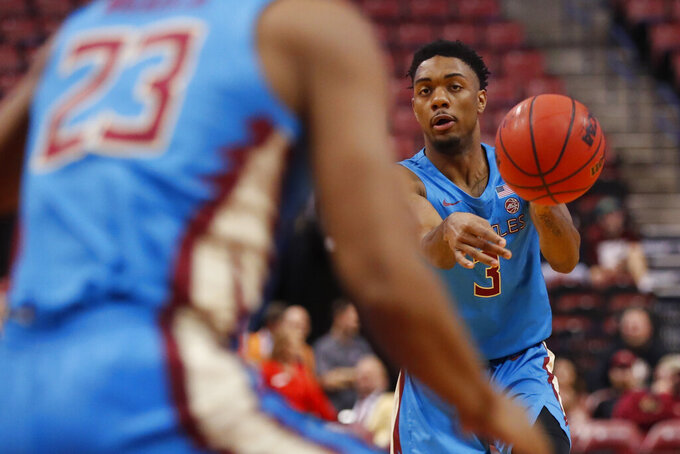 The No. 19-ranked Seminoles used smothering defense to overcome a 10-point deficit in the final seven minutes and beat South Florida 66-60 Saturday in the Orange Bowl Classic.

The Seminoles shot only 40 percent but matched a season high by forcing 24 turnovers, including seven as they outscored the Bulls 19-3 down the stretch.

“When we went down 10, I thought we became more aggressive," Florida State coach Leonard Hamilton said. "Our aggressiveness generated some easy baskets off turnovers.”

The Seminoles (10-2) deployed double teams along the sidelines and near midcourt to repeatedly force South Florida mistakes down the stretch.

“We had a plan to trap the ball screen,” said guard Anthony Polite, chosen the game's most valuable player. "That led to a few steals that gave us energy, and we were able to get some easy baskets in transition. That gave us momentum."

“The guys are ticked off because we lost that game, which is good for me to able to coach them, because they are not going to accept the fact that we just competed and hung in there,” coach Brian Gregory said. “They want to take another step.”

With 13 steals and 21 points off turnovers, the Seminoles won despite a poor shooting effort, including 7 for 27 from 3-point range. They also were outrebounded by 14 by the Bulls.

“They outplayed us for the majority of the game,” Hamilton said. “They brought a lot more than we had asked for.”

A flurry of nine points in 39 seconds by the Bulls — including a pair of 3s and two free technical foul free throws — helped them lead 57-47 with 6:32 to go. But they didn't score another field goal until garbage time with 3 seconds left, and committed turnovers on four consecutive possessions as the Seminoles pulled ahead.

Michael Durr had 15 points and seven rebounds for the Bulls, but they shot just 3 for 15 from 3-point range. Four of their turnovers came on shot-clock violations.

The Seminoles trailed for more than 33 minutes, and made only one of their first 13 shots as South Florida raced to a 17-4 advantage. Florida State missed its first 10 3-point tries.

Xavier Castaneda's driving layup with 3 seconds left in the first half gave the Bulls a 31-28 halftime lead.

The technical foul was called on the Florida State bench, but Hamilton pleaded innocent.

“I really don't know what happened on the technical,” he said. “The ref was on the other side of the court. He has really good ears, I guess. I didn't hear it, and I was right there.”

Winning with defense is nothing new for the Seminoles. Four victories have come when they score 66 points or fewer.

South Florida has a .500 record for the fifth time this season.