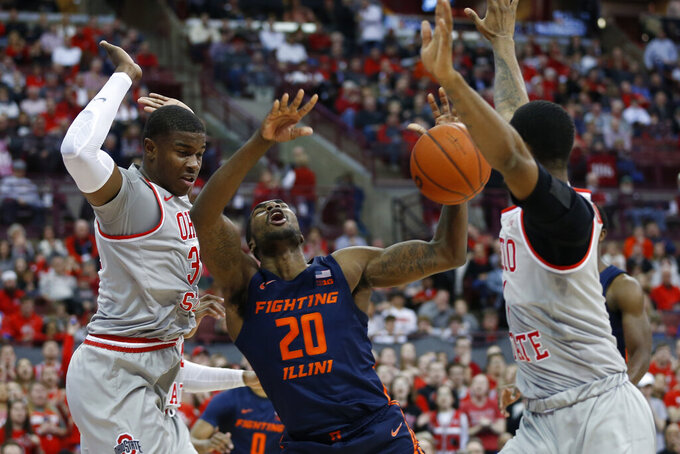 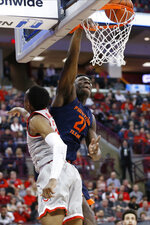 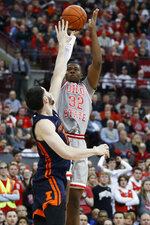 COLUMBUS, Ohio (AP) — With one of Ohio State's key big men out with an ankle injury, freshman E.J. Liddell stepped in and played his best game as a Buckeye so far.

Liddell slammed in a dunk that gave the Buckeyes the lead for good on the way to tying a career high with 17 points and pulling down a career-best 11 rebounds as No. 19 Ohio State pulled away for a 71-63 win over No. 23 Illinois on Thursday.

“Knowing that we’re down a few guys, E.J. has definitely been stepping up,” said Andre Wesson, a senior who played his last game at Value City Arena. “You can definitely see it in practice. He's just been playing better and better and just his energy today, his physicality, it was real big for us.”

Liddell also played a career-high 26 minutes with junior forward Kyle Young out with an ankle injury.

Kaleb Wesson, Andre's younger brother, had 15 of his team-leading 19 points in the second half for the Buckeyes (21-9, 11-8 Big Ten), who have won four in a row and nine of their last 11. They are playing well at a critical time, with a road matchup against No. 16 Michigan State looming this weekend and the Big Ten tournament beginning Wednesday in Indianapolis.

“Good resolve,” Ohio State coach Chris Holtmann said. “We were really tough-minded. We've been a very tough-minded group these last five weeks. We’ll see if that continues. Obviously there's no permanency to that.”

Ayo Dosunmu had 21 points and five assists to pace Illinois (20-10, 12-7), which saw its conference championship hopes fade a bit more after starting the day a half-game behind leaders Maryland, Wisconsin and Michigan State. Still, the Illini are poised for a berth in the NCAA Tournament for the first time in seven years.

Illinois led by as many as 11 in the first half and held a 37-30 lead at the break. The Buckeyes let fly with the 3-pointers in the opening frame but hit just one in seven tries.

With Illinois went up by seven in the second half, Ohio State chipped away and Kaleb Wesson’s fadeaway jumper tied the score at 51 with 9:30 left, part of an 11-2 run by the Buckeyes, who then built an eight-point lead.

After Wesson picked up his fourth and fifth fouls in a 15-second span, Illinois got within five with a steal by Dosunmu and a coast-to-coast layup by Andres Feliz. But Liddell's shot in the paint and a couple of foul shots by Duane Washington Jr. gave the Buckeyes a 69-60 lead with 32 seconds remaining.

Illinois: The Illini's second-half shooting was cold and 14 turnovers didn't help. They shot 35.7% in the second half after making more than half their shots in the first.

Ohio State: Despite bad 3-point shooting (3 for 15) and foul trouble for star Kaleb Wesson, the Buckeyes found a way to rally as a tumultuous regular season winds down.

The Buckeyes could move up slightly, but they're more concerned about tournament seeding at this point.

BLAST FROM THE PAST

Ohio State honored the 1960 national championship team at halftime. Surviving members who showed up for the reunion included Jerry Lucas, Mel Nowell, Joe Roberts and Bob Knight. They also got a chance to talk to the current team.

Illinois: Hosts Iowa in its regular-season finale on Sunday.

Ohio State: Finishes the season on Sunday at Michigan State.