No. 19 Texas has mix of experience and elite young talent 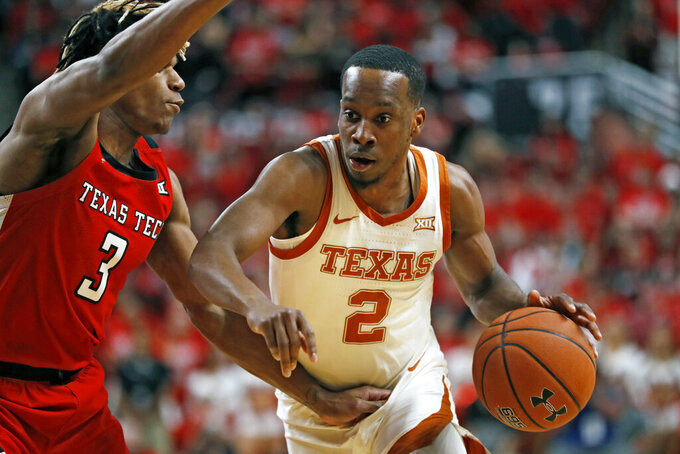 FILE - In this Feb. 29, 2020, file photo, Texas' Matt Coleman III (2) drives the ball around Texas Tech's Jahmi'us Ramsey (3) during the first half of an NCAA college basketball game in Lubbock, Texas. Coleman is the floor leader who has seen everything. Andrew Jones and Courtney Ramey bring playmaking and defense. Those three found a rhythm that propelled a five-game win streak late last season. (AP Photo/Brad Tollefson, File)

AUSTIN, Texas (AP) — Shaka Smart should have everything he needs this season with a Texas roster full of experience and brawny, young talent.

Can he finally deliver the results the Longhorns have been expecting after years of misfires?

Smart enters his sixth season at Texas, where he is 90-81. While his previous teams included three first-round NBA draft picks, the Longhorns haven't won an NCAA Tournament game in his tenure and missed the tournament twice, not counting the pandemic-shortened season this past spring. His only winning season in the Big 12 was his first.

That track record saw the temperature rising under Smart until the pandemic sent everyone home early. Yet despite perennial underachievement, Smart and the Longhorns head into the season ranked No. 19 in the AP Top 25.

That's because they return a roster full of seniors, deep experience in the backcourt led by guard Matt Coleman III and talented freshman forward Greg Brown III, who may be a one-and-done talent soon headed to the NBA.

So if not now for Texas, when?

“We're excited about the experience we have,” Smart said. “It's one thing to have experience, it's another to go out and utilize it. It's exciting those guys have been through those wars, won some of them and lost some of them. I think sometimes part of becoming a winning, highly successful team is going through those times where you do have heartbreak in games and learn from those.”

Coleman is the floor leader who has seen just about everything. Andrew Jones and Courtney Ramey bring with playmaking and defense. Those three found a rhythm that propelled a five-game win streak late last season. The Longhorns are still waiting for sharp-shooter Jase Febres to be cleared to play after knee surgery. Smart said Jones “needs to shoot as much as he possibly can.”

Brown was a huge get for Smart when it would be have been easy for an elite recruit to avoid the uncertainty surrounding the program. A local product, Brown was the only member of Texas' 2020 recruiting class and he stuck with Smart while spurning reported offers to sign with the developmental G League. At 6-foot-11, Brown adds an impressive dimension of versatility inside and out.

“When he's at his best, he's playing with a real level of violence," Smart said. “That's been a big emphasis for us coming out of last season. We have flat out have to be a more violent team.”

Texas has waited three years for 6-foot-10 Jericho Sims to break out in the frontcourt. Sims is an incredible leaper and dunker but he's been a project since he first got to Texas. A back injury sidelined him late last season and he could be an huge complement to Brown if consistent.

“We were proud of the progress he was making before he got hurt,” Smart said.

With this lineup, Smart is under intense pressure to perform. But this isn't the first time, and Smart has so far handled it with poise and grace publicly. But if the season gets off to yet another rocky start in a rugged Big 12, how Smart handles fan unrest will be worth watching.

The Longhorns start the season at home against Texas-Rio Grande Valley on Nov. 25, then head off to the Maui Invitational (in Asheville, North Carolina) where a second-round matchup with Indiana or Providence awaits in a critical early test. They host No. 3 Villanova on Dec. 6 before Big 12 play starts Dec. 13 against No. 2 Baylor. There's also a Jan. 30 road trip to No. 10 Kentucky in the Big 12/SEC Challenge.