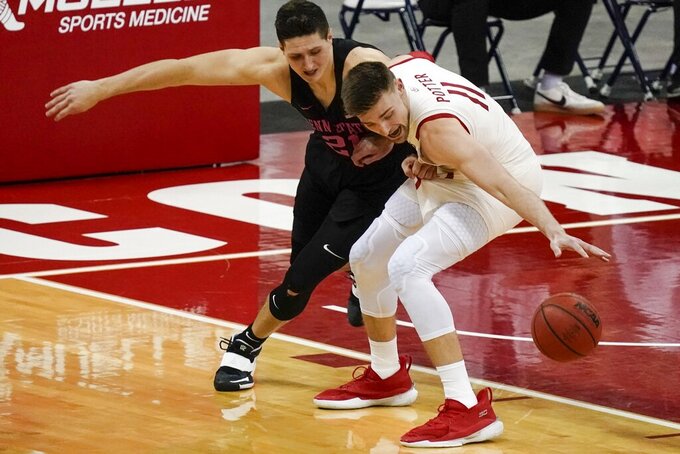 MADISON, Wis. (AP) — Freshman Jonathan Davis scored a career-high 17 points and No. 19 Wisconsin resumed its usual dominance of Penn State with a 72-56 victory on Tuesday night.

Davison made a 3-pointer at the halftime buzzer, giving Wisconsin a 33-31 lead it never relinquished. The shot was part of an 18-2 spurt that included two other 3s from Davison.

The Nittany Lions and Badgers played twice in four days because COVID-19 issues forced the postponement of their scheduled Jan. 3 matchup at Penn State.

Penn State stayed close early by forcing turnovers, the same thing it did in Saturday's win. Wisconsin committed 12 turnovers at Penn State and had 15 on Tuesday, including 11 in the first half.

The Badgers scored 15 of the first 17 points in the second half to extend their lead to 48-33. Penn State didn't get closer than 13 points the rest of the way.

Penn State: The Nittany Lions' 81-point outburst on Saturday was their highest total in the history of a series that the Badgers now lead 40-11. They shot 45% in that game. In the rematch, Penn State shot 38.6% and went 6 of 24 from 3-point range.

While Wisconsin had cutouts fill most of the seats in the first five rows behind the benches with no fans in attendance, a couple of seats instead had signs saying “In Memory of Ritchie Davis” and “In Memory of Tracy Krueger.”

Davis, a prominent organizer of grassroots basketball programs in Wisconsin, died Sunday. He was 48. Krueger was officiating a high school basketball game in Richland Center, Wisconsin, on Monday night when he collapsed and died. He was 69.

Wisconsin has been sliding down the AP Top 25. That could change if the Badgers beat No. 12 Illinois this weekend.