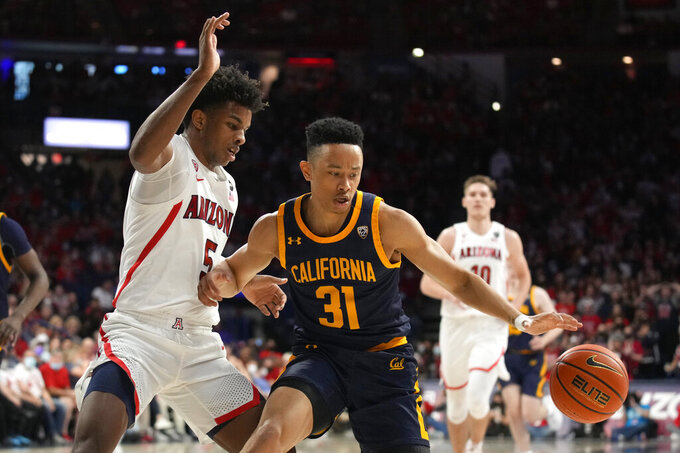 TUCSON, Ariz. (AP) — Arizona coach Tommy Lloyd was asked earlier this week whether his team would cut down the nets for winning the Pac-12 regular-season championship after Saturday's game against California.

Only if the Wildcats won, he said.

No problem there. No. 2 Arizona closed out its first season under Lloyd in dominating fashion, crushing Cal 89-61 to become the first Pac-12 team to win 18 conference games.

Oumar Ballo scored 16 points, Bennedict Mathurin added 13 and the Wildcats celebrated the Pac-12 title they clinched on Tuesday by snipping the nets. Pelle Larsson and senior Justin Kier scored 13 each.

“From where we started and where we are now, I didn't expect that,” said Lloyd, pointing to the Pac-12 championship trophy. “I just didn't want to celebrate it early.”

Arizona (28-3, 18-2) sewed up its first conference title in four years with a 91-71 win over No. 16 Southern California on Tuesday, then had a sluggish first half two days later against Stanford before pulling away.

The Wildcats dominated the conference's other Bay Area team early, building a 17-point lead midway through the first half with a 19-2 run.

Arizona shot 65% and scored 49 points in the paint to finish 17-0 at home in its first season under Lloyd — not bad for a team that started the season unranked and was picked to finish fourth in the Pac-12.

“Once we got to where we needed to be, we wanted more, we were still hungry,” said Kier, who played his final home game. “We're going to continue to be hungry until we get what we want.”

Cal (12-19, 5-15) played well for stretches without point guard Joel Brown due to a knee injury, but couldn't recover from Arizona's big early run. Jordan Shepherd led the Bears with 16 points.

"We got a little fatigued and made some costly errors there in the second half defensively,” Cal coach Mark Fox said. "Against a team with as much talent as they have, you cannot afford to do that."

Arizona dominated the first meeting with Cal on Jan. 23, building a 14-point lead in the opening six minutes on the way to a 96-71 win. The rematch played out in similar fashion.

Creating transition opportunities with their defense and pounding the ball inside, the Wildcats reeled off a 19-2 run to build a 26-9 lead midway through the first half. Ballo had 11 points during the run, including three rim-shaking dunks.

Arizona cooled a bit down the stretch of the first half — one field goal over the final 4:20 — but Mathurin made consecutive 3-pointers early in the second to get the rout going again. Arizona hit seven of its first 10 shots to stretch the lead to 66-46 and hit 15 of 23 in the second half.

Cal had its worst offensive game of the season to kick off the final weekend of the regular season, having shot 31% in a 27-point loss to Arizona State on Thursday.

The Bears brought their offensive struggles down Interstate 10 to Tucson, clanging one shot after another early. Cal bounced back from Arizona's big run and started hitting a few shots, closing with a 14-4 run to pull within 40-31 at halftime. Aside from a few more good offensive stretches in the second half, the Bears but couldn't stop Arizona defensively.

“Some of those costly errors early, if we could have cleaned those up, we could have been even at the half,” Fox said. “Our second-half defense, we just gave up too big of a (shooting) percentage.”

California: Closes the season with four losses in five games. The Bears had some good stretches in one of college basketball's toughest road venues, though, which could help them in the Pac-12 Tournament next week.

Arizona: Capped one of the best home seasons in Pac-12 history with a dominating performance. Now on to Las Vegas for the Pac-12 Tournament, where the Wildcats will be hoping to lock up a No. 1 seed for the NCAA Tournament.

Arizona's Adama Bal has seen limited time during his freshman season as Lloyd has tried to acclimate the French guard to the college game.

The athletic 6-foot-6 Bal has made strides in practice and Lloyd rewarded him with extensive playing time.

Bal entered the game early, hit his first shot and scored seven points on 3-of-4 shooting in 17 minutes.

“It's kind of like when you have a talented pitcher and you leave him in the minors until he's ready,” Lloyd said. “He was ready.”

Arizona: The Wildcats are the No. 1 seed in the conference tournament and have a first-round bye; the next game is Thursday's quarterfinals against the Arizona State-Stanford winner.