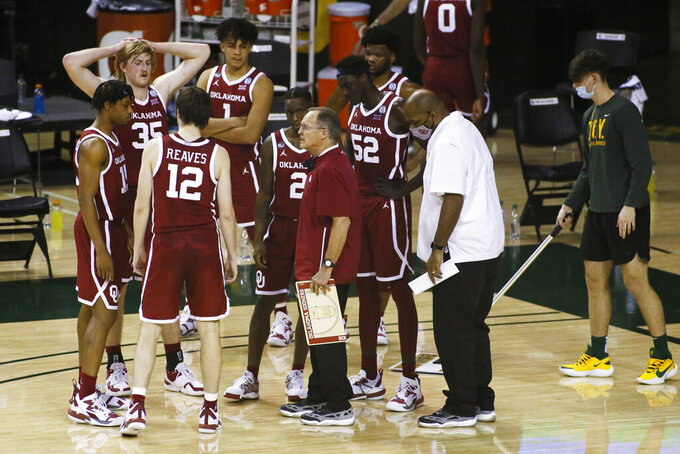 Oklahoma head coach Lon Kruger talks with his team during a timeout in the second half of an NCAA college basketball game against Baylor on Wednesday, Jan. 6, 2021, in Waco, Texas. (AP Photo/Ray Carlin)

MaCio Teague scored 17 points, Matthew Mayer had 16 and both keyed significant runs in the first half as the Bears improved to 10-0 for only the fifth time in team history with a 76-61 win over Oklahoma on Wednesday night.

Drew got his 372nd career victory victory, one more than his father, former Valparaiso coach Homer Drew, had in his 22 seasons as a head coach. Scott Drew has 352 wins in 18 seasons with the Bears, after 20 wins in one season at Valpo.

“He’s a coach, he knows who deserves the credit, and that’s the players and the staff, administration,” Scott Drew said after a congratulatory video message from his father was played after the game. “Head coaches get to benefit from that."

Teague had eight points with two 3-pointers in the first four minutes of the game, helping push Baylor to an early 16-2 lead. Mayer had consecutive baskets 33 seconds apart to ignite a half-ending 14-2 run after the Sooners (6-3, 2-2 Big 12) had moved within five late in the first half.

“Obviously got off to a horrible start. ... They made a bunch of shots and obviously we weren’t getting into them enough to make those shots more difficult," Oklahoma coach Lon Kruger said. “Definitely disappointed by the way we finished the first half.”

Austin Reaves had 19 points and Alondes Williams 11 for the Sooners, who played their third consecutive Top 25 opponent after beating then-No. 9 West Virginia 75-71 on Saturday. They next go to sixth-ranked Kansas.

Brady Mannex, in his 100th career start for Oklahoma, had all 10 of his points after halftime. He was 0-for-4 shooting in the first half when he took a hard fall onto his lower back that left him on the floor for several minutes.

Kur Kuath's third basket in less than 2 1/2 minutes — two dunks and a tip-in — got Oklahoma within 28-23 with five minutes left in the first half. After Drew called timeout, the Bears finished the half with a 14-2 run.

“Basketball is such a game of momentum and spurts. Sometimes you just need to get in a timeout ... and come back a little more focused,” Drew said. “We did that, and the substitutions gave us new energy, new life.”

Mayer had quick back-to-back baskets that were followed by freshman LJ Cryer's deep 3-pointer. Both had entered on the timeout.

“I’ve entered every game with that mindset so far this season,” Mayer said of his aggressive approach.

NOT THE BIG SCORE

The game matched the Big 12's top two scoring offenses. Baylor, second nationally with 92.9 points per game, matched its season low for the second game in a row. Oklahoma was 20 points below its season average.

Oklahoma: There was a stretch when the Sooners won 30 consecutive games against Baylor (1979-2009), but they have now lost six in a row in the series for the first time.

Baylor: The 10 consecutive double-digit victories is a school record for the Bears. ... Adam Flagler finished with 15 points, the sixth time in his eight games he had at least 10 points off the bench.

Sooners junior guard Umoja Gibson, who is from Waco, was coming off a 29-point game against West Virginia when he was 8-of-11 on 3-pointers. Back at home, all five of his points came on free throws while going 0-for-7 shooting, four of those 3-pointers.

“The shots he got were not as good of shots based on what Baylor did. Baylor was aware of what he did the other night,” Kruger said. “I'm disappointed for him. He wanted to come here and play well, and he didn’t have one of his better nights.”

Oklahoma plays its third consecutive Top 10 opponent Saturday at No. 6 Kansas, which lost by 25 in its last home game.

Baylor travels about 90 miles north to play at TCU on Saturday.