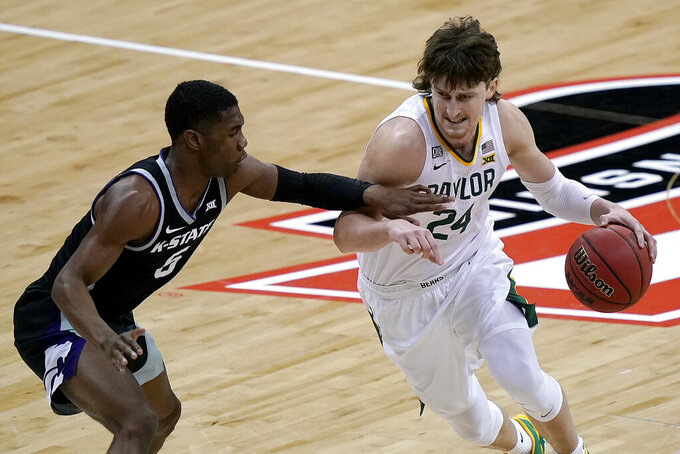 Baylor's Matthew Mayer (24) is pressured by Kansas State's Rudi Williams during the first half of an NCAA college basketball game in the second round of the Big 12 Conference tournament in Kansas City, Mo., Thursday, March 11, 2021. (AP Photo/Charlie Riedel)

KANSAS CITY, Mo. (AP) — Baylor coach Scott Drew has always believed the team that advanced the previous night in the Big 12 Tournament has the advantage in the first half over the team that had a bye into the quarterfinal round.

The team with the fresh legs has the advantage down the stretch.

That played out in the second-ranked Bears' survive-and-advance win over Kansas State on Thursday. It took big games from the backcourt of MaCio Teague, Davion Mitchell and Jared Butler along with some crucial plays in the closing seconds for the Bears to hold on for a 74-68 victory and avoid what would have been one of the biggest upsets in tournament history.

“I thought we were a little tentative,” Drew said. “In the first game you have a little jitters. A lot of our guys hadn't played in the Big 12 Tournament. They were really excited and sometimes that makes you play hesitant. But give Kansas State a lot of credit. I thought they had a great game plan.”

The top-seeded Bears (22-1) rolled into T-Mobile Arena after their first regular-season conference title since 1950, three straight wins over ranked teams and with a No. 1 seed in next week’s NCAA Tournament nearly locked up.

Yet the Wildcats (9-20), who lost their two regular-season games to Baylor by an average of 40 points, never allowed the high-powered Bears to slip away. The plucky bunch of kids kept answering baskets until the final minute. Freshman Nijel Pack’s sixth 3-pointer got them within 70-66 with just over a minute to go.

Mitchell missed at the other end, but Kansas State couldn’t capitalize when Mike McGuirl threw a wild pass that Pack batted into the air. The Bears came down with the loose ball and Butler made a couple free throws to seal the win.

It sent Baylor into a semifinal matchup with No. 12 Oklahoma State on Friday night.

Teague finished with 24 points, Mitchell had 23 and Butler had 18 as the Bears' starting backcourt scored all but nine of their points. But while Teague was solid with the ball, Butler and Mitchell had 13 of Baylor's 21 turnovers.

“We knew it wasn't going to be easy. It's hard to beat a team three times," Mitchell said. “They had a really good plan. They played really hard, really tough. They won yesterday so they had a lot of momentum, so it's good for us in the long run.”

Pack finished with 18 points, as did Davion Bradford, as the ninth-seeded Wildcats lost their ninth straight game against the top seed in the Big 12 Tournament. Kansas State had beaten No. 10 seed TCU in the opening round.

"It felt good for us to have courage and show the improvement we had from the beginning of the year to now, so it felt good," Pack said. “It feels like we're a whole new team. It's like a preview of the years to come.”

Baylor struggled after a late-season, three-week pause because of COVID-19, barely squeaking past Big 12 bottom-dweller Iowa State and losing its only game at Kansas. But the Bears appeared to get their legs — and lungs — back with an overtime win at West Virginia followed by easy wins over ranked teams Oklahoma State and Texas Tech.

They must have lost their mojo again on the way to Kansas City.

The Bears struggled to control the 7-foot Bradford in the paint. They couldn't track down Pack on the perimeter. They coughed up a dozen turnovers by halftime, and they were slow getting to just about every loose ball.

Kansas State hung around long enough to take a 37-36 lead, its first of the game, on Pack's 3-pointer out of the break.

The Bears slowly regained control, and when Mitchell answered Pack's fifth 3 with one of his own — and Teague converted a three-point play moments later — they finally had some breathing room for the first time.

They needed every bit of it down the stretch.

Kansas State had the second-most starts by freshmen in the country behind Kentucky, and it showed during a 13-game losing streak amid a 5-18 start. But the Wildcats may have been the most improved team in the league down the stretch, winning four of five capped by their win over TCU in the first round of the tournament.

Baylor struggled to handle Kansas big man David McCormack in its lone loss this season, and its inability to deal with post players showed up again Thursday. Bradford is far from polished in the paint, but he managed to get a series of easy points at the the rim, and that should concern Drew ahead of the NCAA Tournament.

The Bears will play the red-hot Cowboys on Friday night for a spot in the championship game.