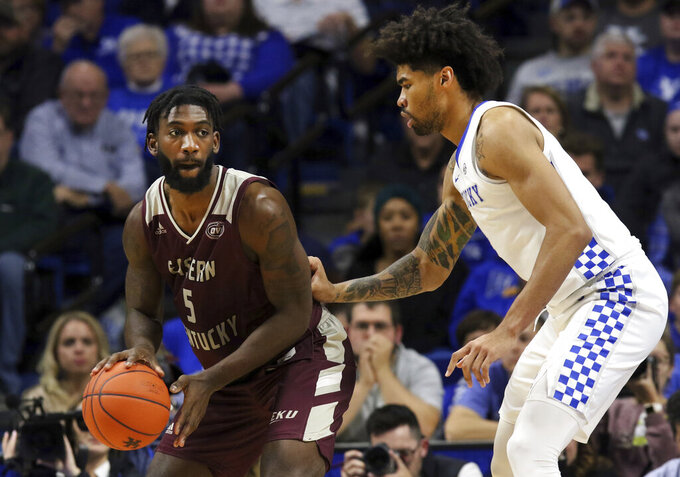 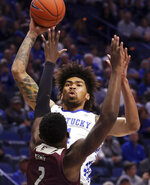 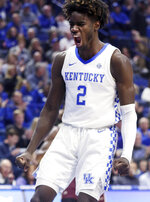 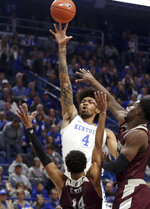 Richards had 21 points and 10 rebounds, Immanuel Quickley added a career-high 16 points and No. 2 Kentucky scored the game's first 14 points to cruise past Eastern Kentucky 91-49 on Friday night.

Seeking to follow up Tuesday's 69-62 victory over top-ranked Michigan State, the Wildcats (2-0) made six of their first 10 shots, including a couple of baskets by Richards. The Colonels, meanwhile, missed their first nine attempts before Darius Hicks' three-point play with 12:57 remaining in the first half.

Richards' point total was just four off his career high against Fort Wayne as a freshman. The junior forward also had four of Kentucky's six blocks, one shy of his best against Kansas last January.

It was just what the Wildcats needed with concerns about its post depth.

"So much better than a year ago," Kentucky coach John Calipari said of Richards. "Then you say, 'You must really be pumping him up, saying great things.'

"No. He's in the greatest shape he's ever been, and he has built his own confidence. It doesn't matter what I say now."

Richards' effort was even more impressive considering he began the week questionable because of a left ankle sprain sustained in Kentucky's exhibition opener against Georgetown College. He returned to get seven points and four rebounds in 25 minutes against Michigan State, and Friday offered proof of his improved health and assertiveness on both ends.

"I'm feeling pretty comfortable on the floor," said the 6-foot-11 Richards, who added that his ankle is "getting there."

"My teammates are trying to find easy ways for me to get baskets, and I'm just trying to do my job on the defense end to help them out on ball screens and get rebounds and blocks as much as possible."

Michael Moreno had 14 points off the bench for EKU, which shot 25% and committed 21 turnovers. Ty Taylor added nine points, while Tre King and Jacquess Hobbs had six apiece.

"We were just shocked," Colonels coach A.W. Hamilton said of the start. "We didn't respond. We didn't handle adversity in the first half, and we dug too big of a hole. We turned it over too much, just sloppy with the basketball."

The Wildcats played without sophomore forward EJ Montgomery, who was declared out before the game with a right ankle injury sustained against Michigan State. Calipari had no update after the game but said "he's hurt" and being evaluated daily.

Richards posted his second career double-double, the first since he also had 15 rebounds against Fort Wayne. Graduate transfer Nate Sestina posted his first double-double with Kentucky after a seven-point, six-rebound debut on Tuesday.

Kentucky's second win this week should earn the nation's No. 1 ranking when the poll is released Monday.

Eastern Kentucky: Other than a first-half stretch in which the Colonels' shooters found their stroke, it was a generally rough night from the floor. They made just 8 of 33 from beyond the arc and only 8 of 31 from inside.

Kentucky: The Wildcats didn't need big baskets from freshman Tyrese Maxey, who had nine points in 26 minutes after scoring 26 against the Spartans. Plenty contributed to their improved shooting performance and a dominant effort on the glass. The Wildcats improved to 13-0 over the neighboring school, a half hour south of Lexington.