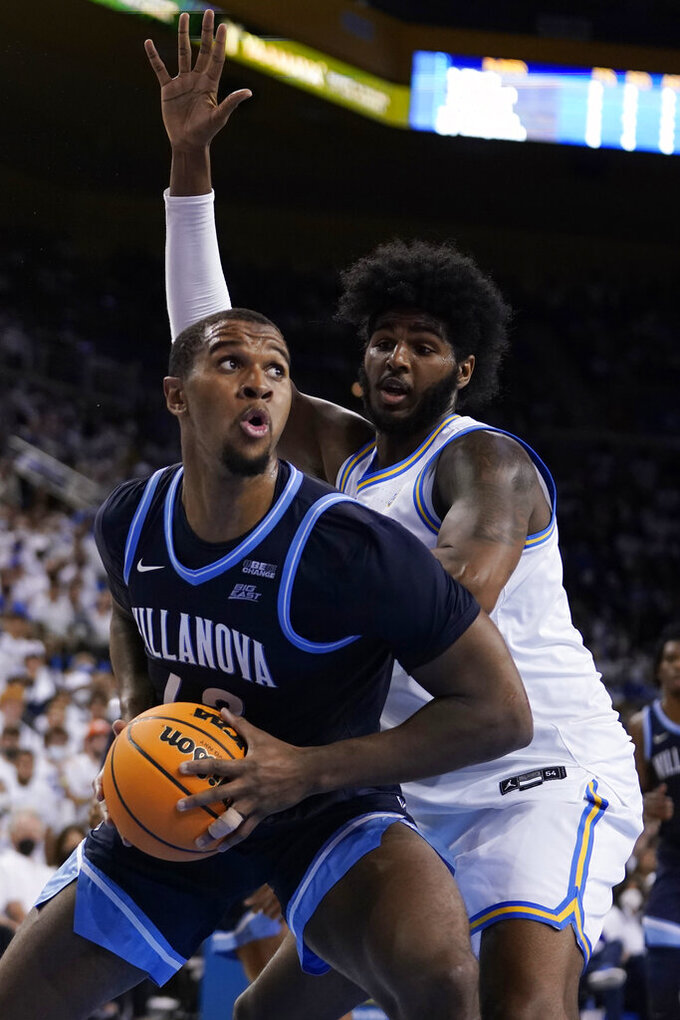 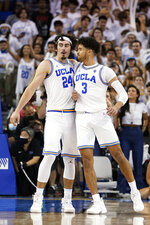 LOS ANGELES (AP) — Two highly ranked teams and a raucous crowd packed into historic Pauley Pavilion sure made it seem like it was already March Madness.

It's not just yet, although No. 2 UCLA backed up its Final Four run last spring with an 86-77 overtime victory against fourth-ranked Villanova on Friday night.

“We love these games,” said Johnny Juzang, the NCAA Tournament star who scored 25 points. “This is where we have the most fun. It’s a blast.”

The Bruins overcame a 10-point, second-half deficit before taking control in overtime.

“They gutted it out and we didn't,” Villanova coach Jay Wright said.

Jules Bernard banked in a jumper that tied it at 67 with 30 seconds to go to force overtime, when over 13,000 cheering, chanting fans remained on their feet until the final buzzer.

The Bruins looked they were going to when they fell behind by 10. But they rallied over the final 5 1/2 minutes of regulation while holding the Wildcats at 67.

After getting to the line just seven times in regulation, the Bruins made all 12 of their free throws in the five-minute extra session, when they outscored the Wildcats 19-10.

“They just made a lot of great plays towards the end," Samuels said. “Those are the plays that you’ve got to get and they got them.”

“It was a great game," Wright said. "Great atmosphere. This place is awesome.”

Cronin added, “I told Jay, ‘Let’s just do it again tomorrow.' Doesn’t get much better than that.”

Neither team gave an inch until midway through the second half.

Leading by one, the Wildcats outscored the Bruins 11-2 to take the game's first double-digit lead, 60-50. Four different players scored in the spurt, with Eric Dixon's three-point play getting it going. Samuels dunked and Justin Moore and Gillespie made consecutive 3-pointers.

Three times the Bruins got within two over the final four minutes — the last when Juzang made a pair of free throws to trail 67-65. Moore missed a layup with 0.2 seconds left that forced overtime.

The game was the earliest matchup by date between AP top-five teams at a campus site in the history of the poll that began in 1948-49, according to ESPN Stats & Info. It also was the first nonconference matchup between two top-five teams in Pauley Pavilion since March 1, 1992, when then-No. 4 UCLA lost to top-ranked Duke.

The Wildcats settled down after an early deficit and outscored the Bruins 24-15, including 10 straight points, to end the half. They took their first lead of the game on a 3-pointer by Gillespie, the first of three treys in a row during the spurt.

Villanova: The Wildcats face tough opponents in the next several weeks, and all of the games are on the road. Next up is No. 18 Tennessee, followed by either No. 7 Purdue or No. 19 North Carolina — all in the Hall of Fame Classic. No. 8 Baylor hosts the Wildcats in early December.

UCLA: The Bruins are less than two weeks away from a game against No. 1 Gonzaga in Las Vegas. Between Villanova and the Zags, they'll find out very quickly what they're made of. The student section chanted, “We want Gonzaga!” as the game ended. “We heard that chant for sure,” Jaquez said.

Wright and Cronin have known each other for years. Villanova faced Cronin-coached Cincinnati eight times as Big East opponents. They won four games apiece. The coaches’ friendship was a big reason why the game was scheduled.

“There’s very few guys as secure as Jay Wright,” Cronin said. “He’s not getting fired. He's got two titles. You got to find somebody like that that’s willing to come West. I’m very appreciative of that.”

The teams were meeting for the sixth time. The first was in the 1971 national championship game at the Houston Astrodome, with UCLA beating Villanova 68-62. Bill Walton, a sophomore on that team, attended the latest meeting. Future NBA player and coach Chris Ford was on the Wildcats’ roster.

Dodgers manager Dave Roberts, a UCLA alum, sat courtside with his daughter and posed for photos with fans at halftime. ... Cedric the Entertainer and actor Jessica Alba, the daughter-in-law of UCLA great Mike Warren, and Jamaal Wilkes were on hand. ... Boxing announcer Michael Buffer took center court before tipoff to proclaim, “Let’s get ready to rumble.”

Villanova: Hosts Howard on Tuesday in the teams' third-ever meeting.