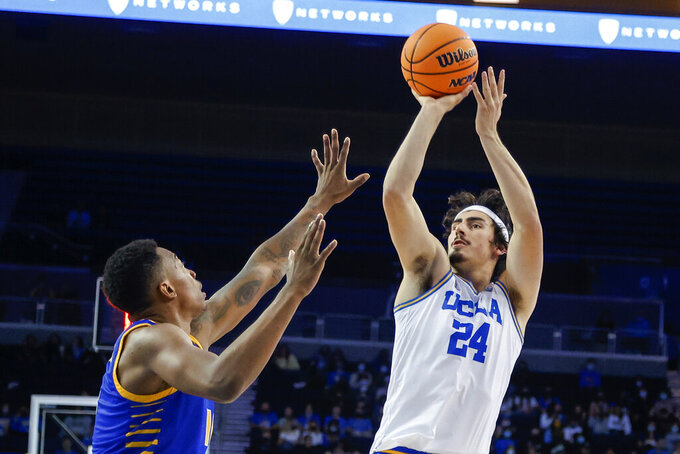 LOS ANGELES (AP) — UCLA got a big win to start the season, along with a dose of bad news, too.

Johnny Juzang scored 19 points, one of four starters in double figures for the second-ranked Bruins in a 95-58 rout of Cal State Bakersfield in the teams’ season opener Tuesday night

“There was a crash,” coach Mick Cronin said. “He said it all happened so fast, somebody ran me over. Hopefully, he's OK and it's not anything too serious.”

The Bruins got 19 points in 16 minutes from Jules Bernard, 14 points by Jaime Jaquez Jr. and 10 points from Tyger Campbell. The team shot 50% from the field and made 20 of 26 free throws.

“We all feel ready to play. We’ve got the energy and the effort,” said Juzang, the star of UCLA's Final Four run last season.

He went down near the opposing bench, clutching his knee. He lay on the court as the arena went silent, and eventually limped to the locker room with some fans chanting his name. The redshirt senior averaged 10 points last season.

“When we saw he was in pain, it was tough to see,” Bernard said. “We wanted to win for him.”

The Bruins hit three straight 3-pointers to open the game, with Bernard making the first. He had a 3 to open the second half, too, and finished with four of UCLA's 13 3s in the game.

Leading by seven, the Bruins put together a 29-8 run to end the half ahead 47-19. Campbell ran off seven in a row and Jaquez hit a 3-pointer just before the buzzer to send the Bruins into their locker room with a rush.

UCLA held the Roadrunners to 8-of-31 shooting and forced 10 of Bakersfield's 15 turnovers in the first half.

Led by McCall, the Roadrunners strung together some productive possessions and improved their shooting to 48% in the second half. Williams hit a 3-pointer and fed Brian Washington for a dunk, and McCall scored four in a row to leave them trailing 68-39.

UCLA responded with six straight points by Juzang and Jaquez to lead 75-39. Cronin was able to get his starters some rest over the game’s final six minutes while giving minutes to youngsters, including Jaylen Clark, who had 10 points and seven rebounds.

UCLA reserve forward Mac Etienne hurt his right knee several weeks ago and Cronin has said the injury could keep the redshirt freshman out for the entire season. However, the medical staff hasn’t given the final word yet.

Etienne was on the court encouraging his teammates during pre-game warmups, wearing a black sleeve on his right leg that ended at midcalf.

He enrolled in the middle of last season and ended up playing during the Bruins’ NCAA Tournament run.

Cal State Bakersfield: The Roadrunners enter their second season in the Big West with a roster representing 882 games of collegiate experience. But several of the players are new to each other and getting the chemistry down — as well as establishing a rotation — are early priorities.

UCLA: The Bruins were 11-1 at home last season, when there were no fans because of the coronavirus pandemic. Their spirited student section was full and clearly glad to be back on Tuesday — getting rowdy in a prelude to Friday's big game against Villanova. “It was an amazing feeling having the students there and it just brought a lot of energy,” Bernard said.

UCLA: Hosts No. 4 Villanova on Friday in the Bruins' first major matchup of the season.