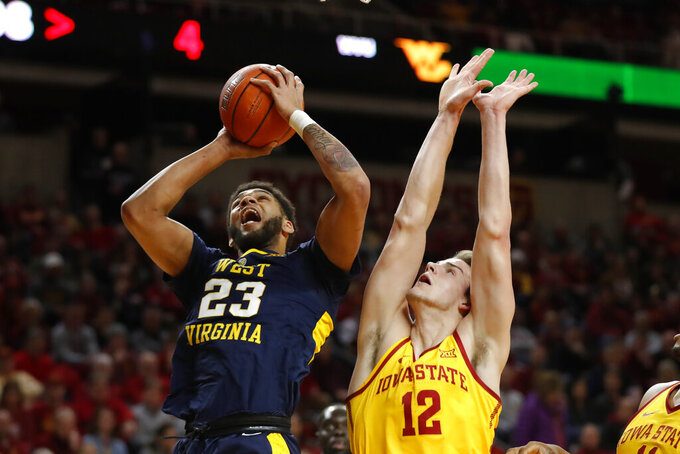 AMES, Iowa (AP) — Iowa State's Lindell Wigginton leapt into the lane to steal a pass, sprinted down the court and got fouled. He then casually flipped the ball underhanded toward the basket from 30 feet — and found the bottom of the net.

It was that kind of night for Wigginton, who has transitioned from a starter on a losing team to a lethal weapon off the bench for a winning one.

Wigginton's previous high for points this season was 18 on Saturday in a Top 25 road win at Mississippi, a sign that he's finally 100 percent back from the foot injury that cost him most of the non-conference season.

"When you've got players and coaches that believe in you, you're going to give it your all," said Wigginton, a preseason all-league pick. "Your confidence is going to stay high."

After a somewhat sluggish start, Iowa State closed the first half on 18-6 run to jump ahead by 17. West Virginia hung around, even using its shelved press defense to confuse the Cyclones and pull to within 61-51 with just under 10 minutes left.

Iowa State then hit seven straight shots, a stretch capped when Wigginton's three-point play made it 74-56 with 6:12 to go.

Nick Weiler-Babb had 14 points with six rebounds and four steals for the Cyclones.

"We hit our struggles earlier in the season and got those out of the way," Weiler-Babb said. "Now we're getting our guys back to full health. Lindell is coming back (and) probably getting a little rhythm back."

Lamont West led West Virginia (9-12, 1-7) with 24 points. The Mountaineers committed 19 turnovers and didn't score once on a fast break.

"No knock on them, but everyone shoots a high percentage against us," West Virginia coach Bob Huggins said.

Huggins was ejected from the game with 3:28 left for arguing with the officials, and he had to be restrained by an assistant on his way back to the locker room.

"I'm trying to say this so I don't get in trouble. I just think things ought to be equitable," Huggins said of the calls that ended his night. "I thought our guy got knocked down. Obviously they didn't, so we had a difference of opinion."

Iowa State: With all the chaos erupting atop the Big 12 standings, the Cyclones have a shot at taking control of the league in the weeks ahead. Nights like this are a strong reminder that they have enough talent to do so. "All I know right now is that we're going for that No. 1 spot," Weiler-Babb said.

West Virginia: This would have been a tough game for the Mountaineers even with guard James Bolden, who missed the game with an injured hand. Iowa State's guards exploited West Virginia's lack of depth in the backcourt and never gave the Mountaineers a real chance to make a game of it.

West Virginia got West wide open underneath the basket for an easy layup that pulled the Mountaineers within 31-24. Wigginton then hustled down the floor and drilled a 3 — while getting fouled. Wigginton's four-point play made it 35-24, and he followed that up with a pair of free throws. Tyrese Haliburton capped the stretch with a 3, and all of a sudden West Virginia found itself in a 40-24 hole.

The weather in Iowa was so cold that the entire state canceled mail service on Wednesday, and it showed at Hilton Coliseum. The Cyclones typically fill their gym, especially for league games, but attendance was sparse at the upper levels of the arena. It was hard to blame some fans for staying home, though, on a day when the wind chill reached as low as minus-49 in Ames. But when Iowa State needed its crowd down the stretch, Hilton was as loud as ever.