No. 21 Arizona aiming to get back on track 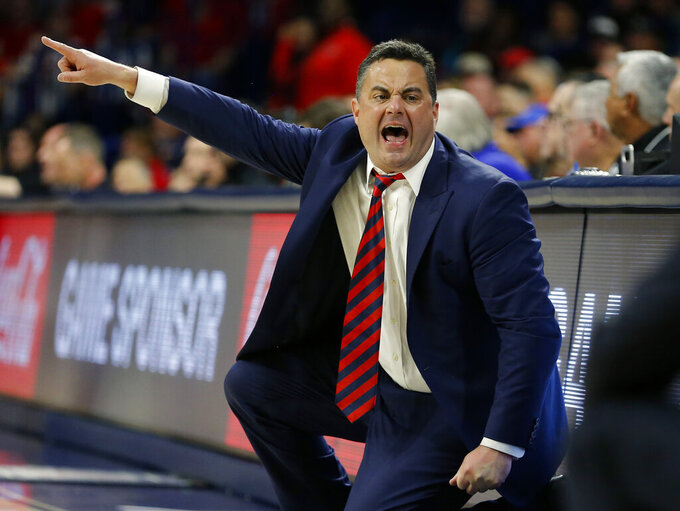 The Wildcats may still come under scrutiny for their recruiting, possibly from the NCAA this time, but they fully expect to be better on the court.

"We have eight new players and I wouldn't be surprised if we take a few lumps in November and December," Miller said. "But I feel we will have a better upside, a higher ceiling."

Arizona entered last season still under the shadow of the FBI investigation and it hurt Miller in recruiting circles, leading to one of the lowest-rated classes during his 10-year tenure in Tucson.

The NCAA has begun cracking down on teams caught in the FBI investigation with North Carolina State and Kansas already charged with violations. Arizona could face sanctions after former assistant coach Emanuel Richardson was sentenced to three months in prison as part of the college hoops scandal.

But the ongoing scandal did not hurt Miller while pulling together his latest recruiting class.

Arizona again had one of the nation's top classes in 2019, headlined by point guard Nico Mannion and athletic guard Josh Green, both five-star recruits.

Miller also added graduate transfers Max Hazzard, who averaged 12.5 points per game at UC Irvine last season, and Stone Gettings, a former Cornell forward who scored 16.7 points a year ago. Both are solid 3-point shooters, a huge boost for a team that has struggled from the arc.

They'll join returnees Chase Jeter, Dylan Smith, Ira Lee and Devonaire Doutrive on a team that hopes to erase memories of last year's 17-15 season and get the Wildcats back into the NCAA Tournament after their six-year run ended in 2019.

"The gift of size and depth is something that everybody would love to have and we have that," Miller said. "It's just now up to us to develop those guys, figure out the combinations and see who plays well with who."

Arizona took a big hit when sophomore point guard Brandon Williams underwent season-ending surgery to correct a congenital condition in his right knee. The 6-foot-2 guard missed six games during his freshman season and struggled with knee pain late in the year.

Williams averaged 11.4 points and 3.4 assists per game last season and was expected to take on a big role with this year's team. His absence means Mannion will likely start at point guard as a freshman and Hazard may get more ballhandling duties.

Mannion, from just up Interstate 10 in Phoenix, is a pass-first point guard ranked No. 1 at his position in this year's recruiting class. He also can score when called upon and fills a big need in Tucson, particularly with Williams out.

Green is a powerful, athletic 6-6 guard from Australia who can shoot from the perimeter and get to the rim.

The class also includes Zeke Nnaji, a versatile 6-11 forward, and 7-footer Christian Koloko, who's thin but is athletic and has good hands.

The 6-5 Smith can be a shutdown defender and get hot from the perimeter. He averaged 7.2 points as a junior last season.

Lee is an active 6-7 forward who isn't afraid to bang inside and averaged 6.6 points and 4.2 rebounds as a sophomore last season.

Doutrive showed flashes of brilliance as a freshman, though he was inconsistent. He announced he was transferring during the summer but opted to come back.

Arizona has some tough nonconference games.

After home games against Illinois and New Mexico State in November, the Wildcats play at No. 16 Baylor and will host No. 8 Gonzaga on Dec. 14 in what will surely be a raucous atmosphere at McKale Center.