No. 21 Illinois in first-place tie, faces Michigan next 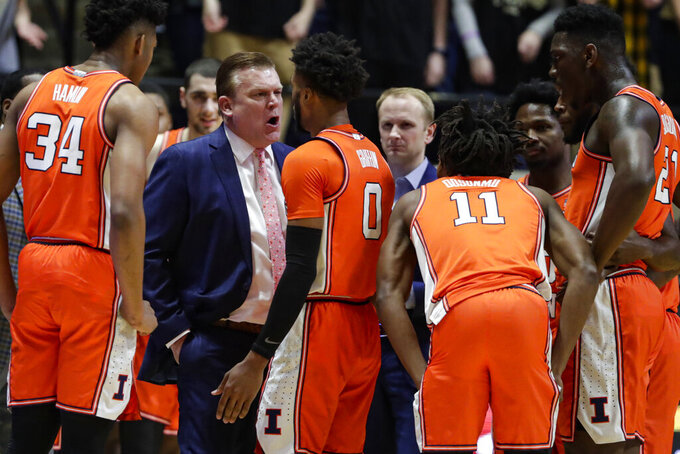 Illinois head coach Brad Underwood speaks with guard Alan Griffin (0) after being called for a foul during the first half of an NCAA college basketball game against Purdue in West Lafayette, Ind., Tuesday, Jan. 21, 2020. Griffin was ejected for the foul. (AP Photo/Michael Conroy)

What to watch in Big Ten basketball this weekend:

No. 21 Illinois at Michigan, Saturday. The Illini (14-5, 6-2) are tied for first place in the league after No. 11 Michigan State's loss at Indiana on Thursday night. That's a big deal for Illinois, which hasn't finished above .500 in conference play since 2010. Coach Brad Underwood's team has won five straight games, and the Illini now face a Michigan team that's going through a rough stretch. The Wolverines (11-7, 2-5), who have been without injured forward Isaiah Livers, have lost three in a row and four of their last five. Illinois guard Alan Griffin was suspended two games for stepping on Purdue's Sasha Stefanovic in a game Tuesday. Illinois beat Michigan 71-62 when the teams met in December.

After scoring only 10 points combined against Ohio State and Rutgers, Indiana's Trayce Jackson-Davis rebounded with 18 against Nebraska last weekend and 12 in the win over Michigan State. The 6-foot-9 freshman leads the Hoosiers in scoring and rebounding.

Rutgers is back in the AP Top 25 for the first time in over 40 years. The Scarlet Knights were No. 24 this week. It was the first time Rutgers was ranked since the final AP poll of the 1978-79 season. The Scarlet Knights, however, lost at Iowa on Wednesday night. ... Big Ten home teams are now 44-11 in league play, but four of the losses came in the past three days. Northwestern and Purdue lost on Tuesday, Michigan fell Wednesday, and Ohio State went down Thursday. ... Purdue and Wisconsin are two of the slowest-paced teams in the country, ranking 347th and 350th (out of 353 teams) in adjusted tempo by kenpom.com.