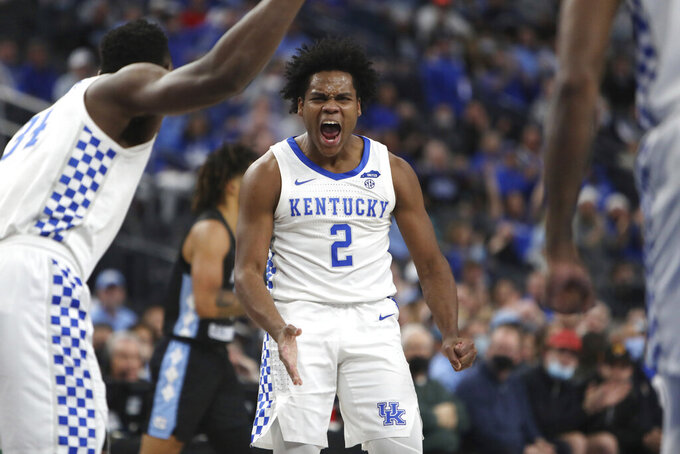 LAS VEGAS (AP) — Kentucky coach John Calipari gave a simple message to Sahvir Wheeler before the Wildcats’ showdown with North Carolina, both individually and in front of the team: “Lead us.”

Whether or not he produced offensively, Calipari pleaded with the team’s fourth-leading scorer who averages just 9.9 points per game.

Saturday, he led, on a stage he cherished.

Wheeler scored 26 points and No. 21 Kentucky beat North Carolina 98-69 on Saturday in the CBS Sports Classic.

Wheeler, who shot a season-best 80% (12 of 15) from the floor, was one of four Wildcats to score in double figures in Kentucky’s first victory away from Rupp Arena.

Oscar Tshiebwe added 16 points and 12 rebounds for the Wildcats (8-2), while Kellan Grady had 18 points and Keion Brooks Jr. had 10.

“That’s by far the best we’ve played and we’re still trying to figure it out,” Calipari said. “Sahvir hasn’t been close to that, maybe the Duke game."

The Tar Heels (8-3) had kept five straight opponents below 64 points. They were held to their lowest scoring output of the season.

The Wildcats disrupted North Carolina’s offensive sets to create turnovers, dominated the offensive glass and hit 54.2% (39 of 72) from the floor.

Kentucky limped into the game near the bottom of the rankings from 3-point range but buried 8 of 15 (53.3%) from beyond the arc — its best long-range shooting display this season.

The CBS Sports Classic was reshuffled days in advance due to COVID-19 to line up Kentucky against North Carolina for the second straight season.

North Carolina won last season’s matchup 75-63 in Cleveland, but the Wildcats had no trouble Saturday on Las Vegas Boulevard, winning for the sixth time in nine matchups overall in the BlueBlood series.

The Wildcats raced to their biggest lead of the first half, an 18-point advantage with 4:18 left behind a balanced scoring with nine players on the scoresheet.

“They hit us with a knockout punch in the beginning of the game and we never recovered,” Bacot said. “They did everything the coaches told us they would do, we just didn’t execute the game plan.”

North Carolina, on the other hand, couldn’t find any sort of rhythm outside of Bacot, who scored 11 of the team’s first 13 points before sitting down with his second foul.

Down 17 late in the half, Bacot scored six straight points to get North Carolina within 11.

The Tar Heels hit just 10 of 27 from the floor in the first 20 minutes, during which they didn’t get many second-chance opportunities with Kentucky dominating the paint by outrebounding North Carolina 26-14.

Kentucky took a 40-29 lead into halftime.

North Carolina dropped to 1-3 against ranked opponents this season.

Kentucky came into the game leading the country in rebound margin (plus-16.3) and outrebounded the Heels by 18 boards 44-26.

North Carolina was receiving votes and sat 27th in the latest poll and will likely fall further back.

Kentucky could move upward considering the dominant performance in its lone game this week.