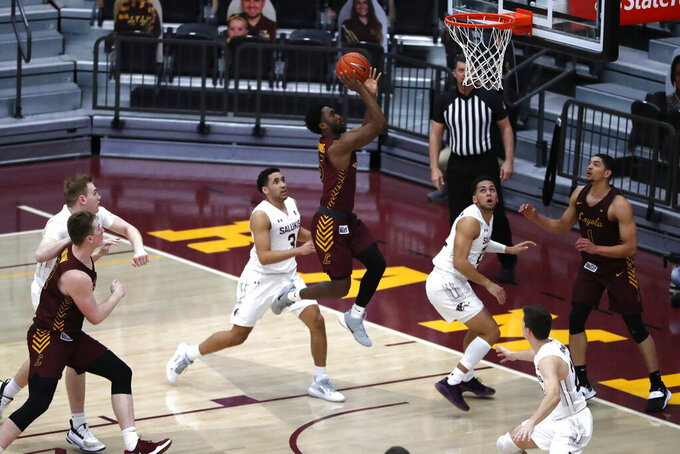 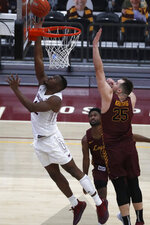 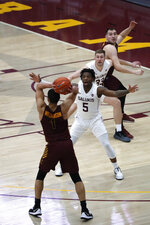 CHICAGO (AP) — Cameron Krutwig had 20 points and No. 21 Loyola scored the last eight points in overtime, rallying past Southern Illinois 65-58 on Saturday night to clinch the Missouri Valley Conference title.

The Ramblers (21-4, 16-2) closed the regular season by winning 14 of 15 games. They won the title outright after Bradley beat Drake about 45 minutes after the game ended. Loyola has won at least a share of the conference title in three of the last four years.

“It's obviously better to win it outright, but to be honest, we didn't care about (the Drake) game,” Krutwig said. “We were focused on this game. There was more celebration when we beat Southern than Drake losing.”

Lucas Williamson scored 13 points and Braden Norris added 12 as the Ramblers extended their home winning streak to 22 games, the fifth-longest active streak in the nation. Loyola won 60-52 on Friday in the first of the back-to-back games,

“Lance brought us back,” Southern Illinois coach Bryan Mullins said. “He shot it with a lot of confidence.”

Norris hit a 3-pointer with 3:01 left in overtime to give Loyola a 60-58 lead. After empty possessions by both teams, Krutwig hit one of two free throws — his first point since the opening minute of the second half — to make it 61-58 with 1:28 to go.

Krutwig then sealed it with a tip-in of a Norris miss with 12.3 seconds left, his only field goal in the second half and OT.

Krutwig had 15 points in the first half on 7-for-9 shooting as Loyola took a 38-25 halftime advantage.

Southern Illinois fell behind 40-25 in the first minute of the second half before putting together an 11-2 run and closing within 42-36.

Loyola built the lead back up to double digits, but the Salukis rallied again, scoring 10 straight points to go on top 51-50 with 5:15 remaining for their first lead of the game. Jones capped the run with back-to-back 3s.

Marquise Kennedy scored on a driving layup with 4:03 left to put Loyola back on top 52-51, ending a scoreless stretch of 5 minutes, 49 seconds.

With the score tied at 54, Kennedy picked up a loose ball following a scramble and hit a long jumper (his toe was on the 3-point line) just before the shot clock expired, giving Loyola a 56-54 edge with 1:46 remaining.

After empty possessions for both teams, Jones was fouled attempting a 3-pointer by Norris with 21.2 seconds to go. Jones made the first two before Loyola coach Porter Moser called timeout. Jones then missed the third attempt.

“He's a terrific player and he had a great two days,” Moser said of Jones. “Sometimes it works, sometimes it doesn't.”

Loyola: By most estimates, the Ramblers are safely in the NCAA Tournament field regardless of what happens next week in the conference tournament.

Krutwig and Williamson were among the seniors honored before the game. They are the winningest four-year players in Loyola history with 94 victories.