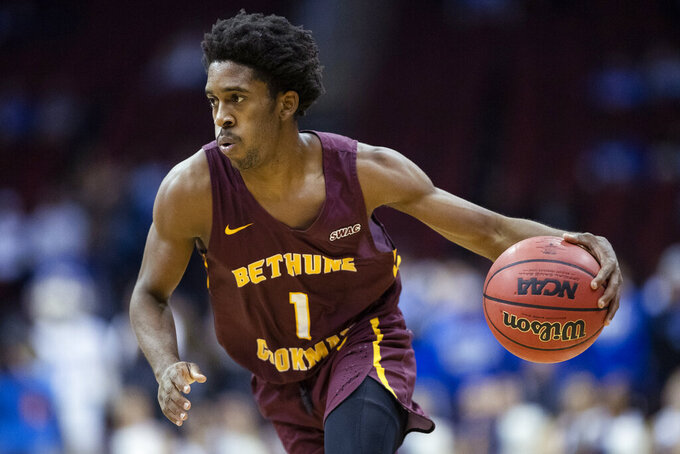 Bethune-Cookman's Collins Joseph (1) looks to pass the ball during the first half of an NCAA college basketball game against Seton Hall, Sunday, Nov. 28, 2021, in Newark, N.J. (AP Photo/Eduardo Munoz Alvarez)

NEWARK, N.J. (AP) — Kevin Willard went through his usual halftime routine with Seton Hall trailing a Bethune-Cookman team it should have handled easily. The 12th-year coach calmly broke down game tape and made some alterations.

The low-key approach paid off as No. 21 Seton Hall pulled away in the second half for an 84-70 win over Bethune-Cookman on Sunday. Jared Rhoden scored 18 points, and Alexis Yetna had 14 points and 13 rebounds for the Pirates.

“More or less, I always just make corrections. I don’t try to reinvent the wheel at halftime. We try to just make game adjustments at halftime,” Willard said. “I think that was it. That’s all I really do at halftime. I’m not a yeller. It’s not worth it.”

It was the first double-double with Seton Hall for Yetna, a graduate transfer from South Florida.

“I’m still getting used to a lot of the new guys and what they’re doing and what they can do,” Willard said. “One of the things I got to do with Lex is get him inside more and not in space to give him the opportunity to be aggressive and get some of his junkyard dog points that he’s always gotten. Some of his stats and rebounding issues have been more the way I’ve used him on offense than him, but it was good to see him be out there and be aggressive.”

Bethune-Cookman had a 34-33 lead at halftime, but Rhoden’s jumper a minute into the second half gave Seton Hall (5-1) the lead for good and started a 9-0 run. The Pirates stretched their advantage to as much as 23 points.

“We didn’t come out with the level of energy and intensity you wanted to. Obviously, give them credit. They came out ready to play,” said Seton Hall's Jamir Harris, who finished with 11 points. “In a locker room, we were just talking to one another, locking in on getting our intensity to the level we needed to win the game and the coach reiterated that.”

Bethune-Cookman went on a 9-0 run to end the first half, keeping it close thanks in part to Seton Hall’s poor outside shooting. The Pirates went 3-for-17 from 3-point range in the opening 20 minutes but made 5 of 12 3s in the second half.

Seton Hall entered the AP Top 25 last week, its first appearance in the poll since the end of the 2019-20 season, thanks largely to a win over then-No. 4 Michigan on Nov. 16. The Pirates lost their first game at the Fort Myers Tip-Off, 79-76 to Ohio State, before defeating California 62-59 on Wednesday night. They are likely to remain ranked.

Both teams were efficient from the free-throw line. Seton Hall went 20 for 21 while Bethune-Cookman made 6 of 7.

“Even though we’re not shooting the ball well, these guys are good shooters,” Willard said. “So when they get up there, they should be making free throws.”

Bethune-Cookman: The Wildcats’ out-of-conference schedule is full of superior opponents. They have another month to figure things out before playing in the Southwestern Athletic Conference for the first time.

Seton Hall: After a productive two weeks on the road, Sunday’s game began a five-game homestand that concludes with a visit from No. 8 Texas and a rivalry game against Rutgers. The Pirates will cap off nonconference play when they face Iona in the Gotham Classic at Madison Square Garden.

Bethune-Cookman: At UCF next Sunday.