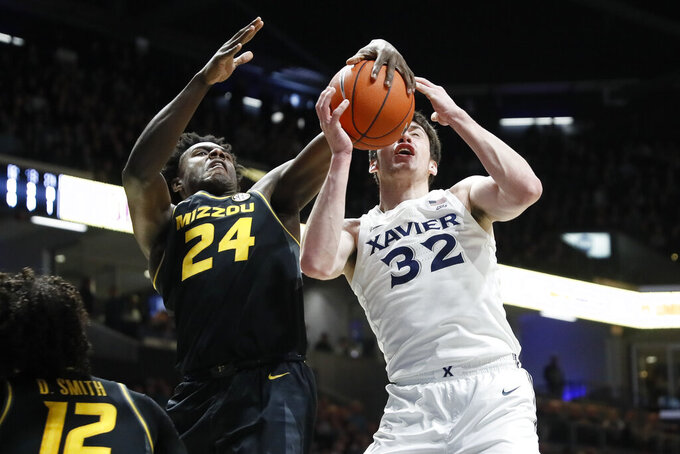 CINCINNATI (AP) — Xavier had made only two 3-pointers all game, none in the second half. Down by three in the closing seconds, the 21st-ranked Musketeers desperately needed somebody to finally hit from long range.

Naji Marshall swished one from the top of the key , and Xavier was finally on its way.

Marshall's clutch 3 tied it in regulation, and he made a pair of free throws in overtime Tuesday night as Xavier overcame poor shooting and rallied for a 63-58 victory over Missouri.

The Musketeers (3-0) let a 15-point lead slip away because they couldn't hit an outside shot, going only 3 of 21 from beyond the arc. Marshall's 3-pointer — Xavier's only one in the second half — tied it 51-all with 27.1 seconds left.

When they absolutely had to have a 3, Xavier let its best player shoot away.

"I knew it was going in," guard Paul Scruggs said. "That's all I've got to say."

Missouri (2-1) missed a 3 at the end of regulation and never led in overtime, losing to a ranked team for the seventh time in a row. Dru Smith led the Tigers with 22 points, 10 rebounds and four assists.

Scruggs hit a pair of baskets in overtime as Xavier built a seven-point lead and held on. Quentin Goodin made three free throws in the final 20 seconds to close it out.

Marshall's big shot made it possible. He finished with 17 points, eight rebounds and a team-high three assists.

"He's talented, he's skilled, he has size, he made the big shot at the end of regulation," Missouri coach Cuonzo Martin said. "Any time you have a guy with that skill package that you can run your offense through, he's tough to guard."

Missouri had a setback in the opening minutes. Top scorer Jeremiah Tilmon picked up two fouls in the first 2:56 and spent the rest of the half on the bench. He finished with six points.

"It was depressing," said Xavier Pinson, who had nine points.

Xavier led by as many as 15 in a ragged first half. Missouri went eight minutes between field goals and had 13 turnovers, but Xavier couldn't take full advantage because of its woeful outside shooting. Goodin's steal and dunk capped an 11-2 spurt that gave Xavier its biggest lead, 27-12.

Tilmon had a layup and Smith scored twice off drives to the basket during a 14-point run that gave Missouri a 38-34 lead, its first since the opening minutes. Xavier went more than seven minutes without scoring while the Tigers rallied .

"That's what we call a rock fight," Xavier coach Travis Steele said. "I knew it wasn't going to be pretty, it was going to be ugly at times, but I was really proud of our guys for handling the adversity we went through."

Xavier: The Musketeers have struggled to hit 3s — an issue last season as well. They are only 13 of 63 on 3-pointers this season.

"We had some wide-open looks," Steele said. "We'll take those shots."

POINTS TOUGH TO COME BY

Last season, Xavier lost at Missouri 71-56, the Musketeers' second-fewest points of the season. They managed 51 in regulation Tuesday.

Scruggs sat out the previous game with a sprained knee, costing the Musketeers one of their top guards. He started Tuesday, played 40 minutes and scored 12 points.

Missouri hosts Wofford on Monday and Morehead State two days later as part of the 2019 Hall of Fame Classic.