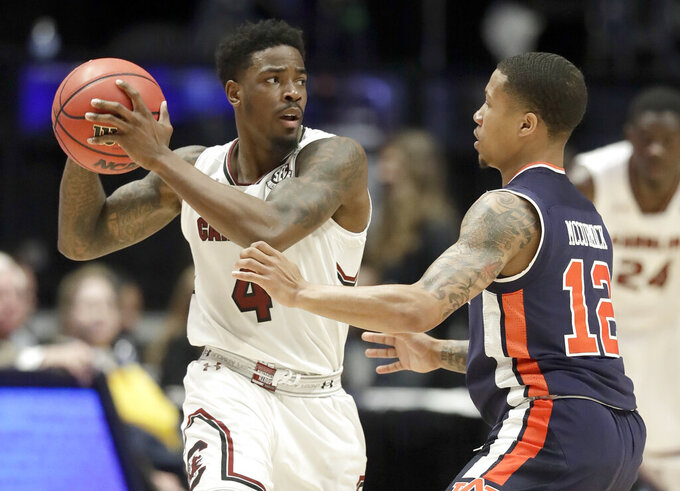 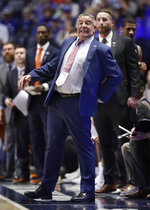 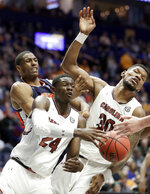 NASHVILLE, Tenn. (AP) — Auburn's Jared Harper didn't attempt a single free throw in the first half. South Carolina couldn't keep him off the foul line the rest of the game.

Harper scored 19 of his 27 points after halftime as the 22nd-ranked Tigers pulled away down the stretch to beat South Carolina 73-64 in a Southeastern Conference Tournament quarterfinal Friday.

"In the postseason, I think these tournament games come down to guard play," said Harper, a 5-foot-11 junior. "I kind of put pressure on myself on being able to perform for my team. My team is going to go as I go. I'm a leader for this team, so if I want to win, I have to make game-winning plays and just lead my team."

The fifth-seeded TIgers (24-9) carry a six-game winning streak into a Saturday semifinal against No. 8 seed Florida (19-14). The Gators eliminated the top seed in this tournament Friday with a 76-73 quarterfinal upset of No. 9 LSU.

Auburn went 13 of 34 from 3-point range Saturday and broke the SEC record for 3-point baskets in a single season by increasing its total to 368. That surpasses the record that had been held by Arkansas, which made 361 during its drive to an NCAA Tournament runner-up finish in 1995.

"Auburn basketball probably doesn't have many records in the history of the SEC," Auburn coach Bruce Pearl said, "but we've got one now."

While Auburn tries to improve its NCAA Tournament seeding, South Carolina (16-16) waits to see whether it merits an NIT invitation, even though its coach believes his team's capable of much more. The Gamecocks went 5-8 in nonconference action this season but earned the fourth seed in this tournament by going 11-7 in SEC play.

"Now, are we an NCAA Tournament team today? I say yes," South Carolina coach Frank Martin said. "But the bottom line is we didn't win enough to get into the NCAA Tournament. Me saying that doesn't mean we belong. I'm just saying we're good enough to be in that. We didn't do enough early in the year to put ourselves in that situation."

South Carolina beat Auburn 80-77 in the regular season thanks to a career-high 32 points from Silva. The senior forward was nearly as good in the rematch and helped South Carolina lead for much of the first half before Auburn rallied to forge a 36-all tie at the intermission.

Auburn pulled ahead early in the second half and stayed in front thanks to Harper, who continually drew fouls driving to the basket and even once while attempting a 3-pointer.

"He kind of makes it look easy when it's late in the game, three minutes left, a lot of pressure on the line," Brown said. "When you have a guard that's just able to get past the man at will, like easily, that's not real easy. He makes it look easy."

Auburn: The Tigers won their lone SEC Tournament title in 1985 and haven't reached the championship game since 2000, but they have reason to feel confident that could change this year. Auburn beat Florida 76-62 at home on Feb. 9 in their lone regular-season matchup.

South Carolina: Depth has been a problem for South Carolina all season, and it showed up again Friday as Auburn outscored the Gamecocks 23-2 in bench points. South Carolina still managed to stay close most of the way, as neither team ever led by more than six points until the final four minutes of the game.

South Carolina waits to learn whether it gets an NIT invitation.