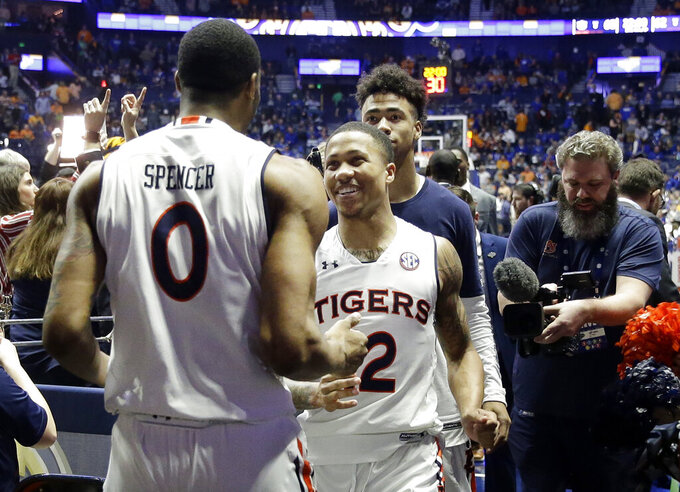 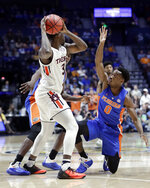 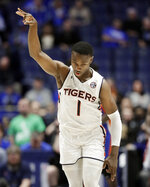 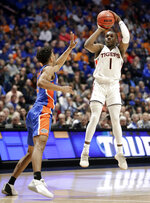 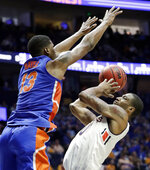 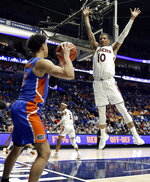 NASHVILLE, Tenn. (AP) — The Auburn Tigers are stringing together some impressive accomplishments with coach Bruce Pearl. Now they have a chance at something particularly special before the NCAA Tournament.

Jared Harper hit a 3-pointer with 12 seconds left as No. 22 Auburn held off Florida 65-62 Saturday to reach the Southeastern Conference Tournament championship for the first time since 2000.

Auburn (25-9) came in as the fifth-seeded team after sharing the SEC regular-season title a year ago, and now the Tigers will play No. 8 Tennessee, an 82-78 winner over No. 4 Kentucky, on Sunday, looking for their second tournament championship and first since 1985. The title game also will give them a chance to burnish their NCAA Tournament seeding.

Florida (19-15) may have needed one more upset after knocking off regular-season champ LSU in the quarterfinals to earn their at-large NCAA berth.

"We're just trying to stay hopeful," Gators senior Kevarrius Hayes said. "It's up to the selection committee and what they decide."

This game felt much more like a consolation prize and warm-up to the other semifinal, with some of the biggest cheers coming on a reminder that Kentucky-Tennessee was up next.

Auburn and Florida did their best to put on a good show with lots of shooting, and the Gators putting on a clinic in precision to keep pace with the Tigers' offense. The Gators turned in their best shooting performance of the season (60.5 percent) on their fewest shot attempts of the year (38). Florida also dominated on the boards (32-17).

"It's really hard to look at that stat sheet and explain an Auburn victory," Pearl said.

When Hayes dunked with 1:11 left to pull Florida within 61-60, that set up a frantic finish.

Auburn's fourth and final turnover came with 57 seconds left when Chuma Okeke was too slow getting the ball across midcourt. Keyontae Johnson missed for Florida, and Harper answered with a 3 — his lone made basket of the second half. Jalen Hudson drove for a layup with 7.4 seconds to go, then Harper hit one of two free throws with 6.2 seconds left.

Johnson rebounded the missed free throw, got the ball to Hudson, who passed to Andrew Nembhard, who upset No. 9 LSU in the quarterfinals by hitting a 3 with a second left. Auburn watched the end of that game. That's why three Tigers surrounded Nembhard, and his shot came up well short and drew no foul call before the buzzer.

Pearl wanted Bryce Brown to foul quickly, and the Auburn senior said it was a mental lapse on his part. Replays show Brown appeared to grab at Nembhard's left arm, but the guard said he felt he got the ball.

"Whether they fouled me or not, it doesn't really matter at this point," Nembhard said.

Pearl said officials didn't call a foul whether Nembhard was tied up cleanly or had some contact.

"We were fortunate," Pearl said.

Harper finished with 20 points, 17 of those in the first half. Bryce Brown scored all 11 in the second half.

"I thought Jared Harper was amazing," Florida coach Mike White said. "I thought that we made a few defensive mistakes, but we were pretty good defensively. They're that good offensively."

Hayes and Hudson each had 16 points to lead Florida, which led 34-30 at halftime.

Florida: The Gators head home at least having made up for losing their final three games of the regular season with their 76-73 upset of No. 9 LSU in the quarterfinals. But they missed their first appearance in the tournament final since 2014 and will have to wait for another chance to add to their four tournament titles.

Auburn: The Tigers improved to 4-8 all-time in this tournament's semifinals, and this is the fourth time they have reached the championship game, following 1984, 1985 and 2000.

Florida also had a season-high 19 turnovers, which Auburn converted into 20 points. White said turnovers are what Auburn is really good at. "It was the turnovers that ultimately cost us," White said.