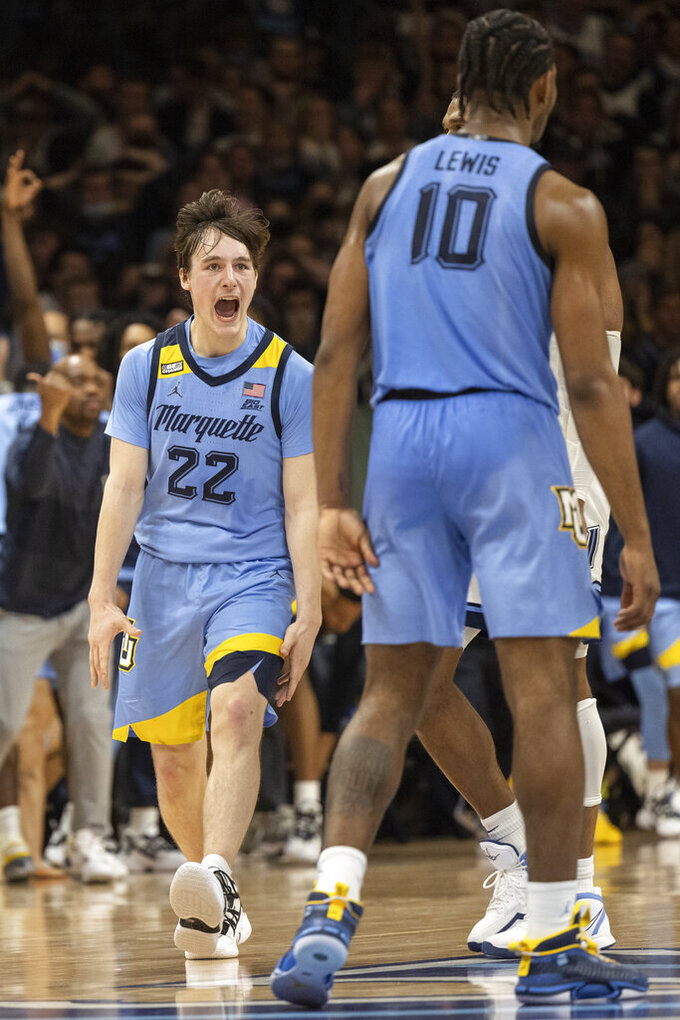 The Golden Eagles had dropped four straight games, including their first three Big East matchups. The skid culminated with a crushing, double-overtime Jan. 1 home loss to Creighton in which they allowed a buzzer-beating 3-pointer at the end of the first extra session.

“Just the pain and kind of sadness we felt after that game, we didn’t really want to feel it again,” Marquette guard Darryl Morsell said.

This is the kind of impression Marquette was hoping to make when it hired coach Shaka Smart to replace Steve Wojciechowski, who was fired after going 128-95 overall but 59-68 in Big East competition.

Not many people expected the impact to arrive this soon. In a preseason poll of the league’s coaches, Marquette was picked to finish ninth out of 11 Big East teams.

“It’s still motivating us to this day,” Morsell said. “I knew that was something that we didn’t want to happen. I knew we had the pieces to be right at the top of the conference.”

The modest projections for Marquette were understandable. The Golden Eagles were coming off a 13-14 campaign – their first losing season since 2014-15 – and didn’t return any of the top five scorers from that team. Two notable holdovers were Justin Lewis and Greg Elliott.

Lewis is the reigning Big East player of the week and made the game-winning 3-pointer that enabled Marquette to snap Villanova's 29-game, on-campus winning streak. Elliott is shooting 51.9% from 3-point range and has gone 13 of 21 from beyond the arc over his last five games.

“I wanted to be a part of taking Marquette back to that special place,” Elliott said. “I felt like I had unfinished business after last year ended. When we got Shaka, I felt like he was a guy that had the same goals I did for Marquette.”

Smart replenished Marquette’s talent base through the transfer portal by adding Morsell from Maryland, Tyler Kolek from George Mason, Olivier-Maxence Prosper from Clemson, and Kur Kuath from Oklahoma.

With so many new faces, Marquette inevitably needed time to develop cohesiveness.

“We talked about this at the end of the summer: We want to grow as much or more than any team in the country,” Smart said after the victory over Xavier. “It’s easy to say that. You have to go through the experiences and put in the work and stay connected enough to do that."

“We’re doing a better job defending,” Elliott said. “We knew we were a couple of defensive stops or a couple of deflections away from getting wins in some of those games we lost.”

Marquette is entering the toughest part of its schedule with four of its next five games on the road, the lone exception a Feb. 2 home game with now-No. 14 Villanova. Seton Hall will have plenty of motivation to beat Marquette on Wednesday after the first game between these teams was decided on a free throw with 1.8 seconds left after a foul call that Pirates coach Kevin Willard disputed.

But if the Golden Eagles take a couple of lumps in the next week or so they’ve already shown they know how to respond to adversity.

“It’s not always a linear path,” Smart said. “It’s just not up, up, up, up, up. Sometimes there’s some setbacks. In fact, the setbacks allow you to grow more.”