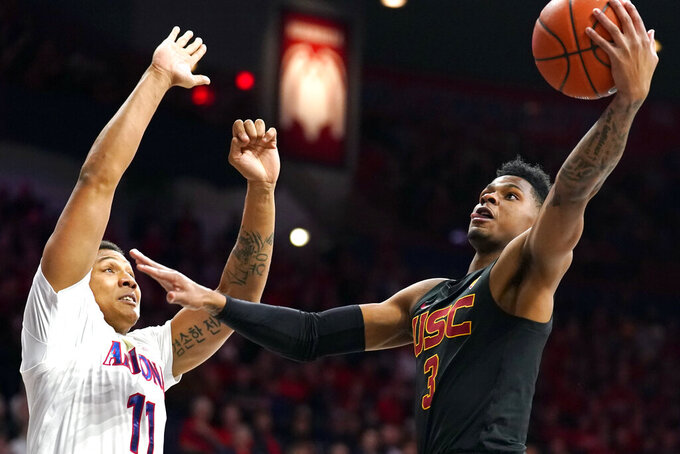 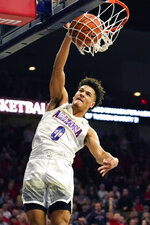 TUCSON, Ariz. (AP) — Josh Green dove onto the floor and wrestled the loose ball away from a group of players before flipping it to Nico Mannion, who quickly fired another pass to Zeke Nnaji, wide open for the easy dunk.

Three Arizona freshmen. One more impressive play that shows how these Wildcats keep getting better.

Mannion scored 20 points, Nnaji and Green each added 18 and No. 23 Arizona held on for an 85-80 win over Southern Cal on Thursday night.

“We're still 18, 19 years old, so we're still getting comfortable playing this game in college,” Mannion said. “It's all still pretty new for us. But the more games we have, the more comfortable we get and all three of us work really hard.”

The Wildcats led by as many as 20 during the second half, pushing to a 63-43 advantage with 12:55 remaining. USC slowly chipped away and pulled within 83-80 with five seconds left on a 3-pointer by Jonah Mathews, but Mannion responded with a pair of free throws to stop the rally.

“They're a good team obviously and it's not easy to play a full 40 minutes of defense,” Mannion said. “We slipped up a little. We weren't as locked in as we should have been and they hit some good shots.”

Said Arizona coach Sean Miller: “We have a very young group. We have a group with a lot to learn. We're very fortunate to win tonight.”

Two of USC's usual starters — Mathews and forward Nick Rakocevic — didn't start the game because of what the school called a “violation of team rules.” They both checked in at the first timeout with 13:37 left in the first half with USC trailing 12-9.

Arizona led 43-33 at halftime and was led by Green's 12 points, including three impressive dunks.

“He was flying around tonight, had great energy,” Mannion said. “He had a few steals, got out in transition and that's where he's best.”

USC coach Andy Enfield said he didn't think the two starters' early absence was a big factor in the loss, but the Trojans still made too many mistakes to fall into a 20-point hole before the late rally.

“We had some really dumb turnovers that led to some transition baskets for them and that hurt us,” Enfield said. “We gave them an opportunity to get out in front. To give our guys credit, they battled, played hard and got some stops.”

Arizona graduate transfer Stone Gettings had one of his best games of the season, scoring 12 points and grabbing eight rebounds while shooting 5 of 7 from the field, including a 3-pointer. Ira Lee came off the bench and added 10 points on 4 of 5 shooting.

Lee said he wasn't worried about nearly losing the 20-point lead in the second half.

“At the end of the day, a win is a win,” Lee said. “USC is a really good team so we'll take the ‘W’, learn from our mistakes and move on. That's conference play.”

USC: The Trojans have hit a small skid with two straight losses in conference play. It's still a physical team that could finish near the top of the Pac-12 and should be helped by playing five of its next eight games at home.

Arizona: The Wildcats are building momentum as the regular season hits its final four weeks. Green, Mannion and Nnaji are playing like veterans and the team's role players are providing great all-around minutes. The win was also the 400th of Miller's career.