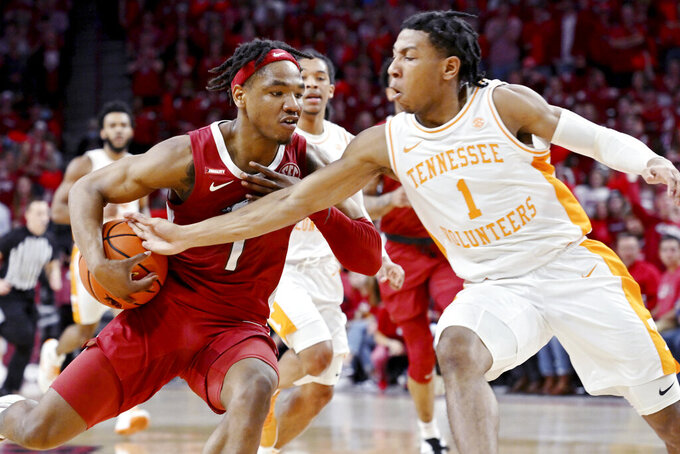 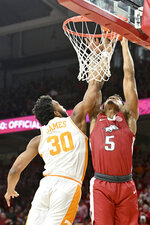 FAYETTEVILLE, Ark. (AP) — No. 23 Arkansas held Tennessee to two field goals in the final eight minutes and used an 11-1 run late in the second half for a 58-48 win over the No. 16 Volunteer on Saturday.

The win is Arkansas' 11th in 12 games, while the Volunteers' loss is just their second since Jan. 15.

“We’re not always cosmetically pleasing offensively, but, man, do we play hard,” Arkansas coach Eric Musselman said. “Nobody plays harder in the country than this team right now.”

Jaylin Williams scored 13 points and grabbed 16 rebounds for the Razorbacks, picking up his fourth straight double-double and his ninth in the last 13 games. JD Notae added 13 points for Arkansas (21-6, 10-4 Southeastern Conference).

Neither team led by more than four points until Devo Davis made a 3-pointer from the corner in the midst of the Razorbacks' late run. Chris Lykes followed with a pair of free throws and Au'Diese Toney finished at the rim to give the Razorbacks a 51-42 lead with 5:17 left.

Tennessee would pull within six points with 58 seconds left, but Arkansas shot 7 of 7 from the free-throw line in the final minute to seal the win.

Tennessee couldn't get its leading scorer, Santiago Vescovi, on track. He picked up his fourth foul with more than 10 minutes left in the game and when he returned with about five minutes left, Arkansas had pulled ahead comfortably. Vescovi entered averaging 13.8 points per game, but was held to 7 points on 2-of-13 shooting.

“To be able to hold Vescovi to 1 of 9 from 3 and 2 for 13," Musselman said. “Au’Diese was struggling offensively, but I felt like I couldn’t take him out of the game, because Diese can guard point guards and guard perimeter shooters. Even though Diese went 1 of 6, but he rebounded with 10 rebounds and his defense was phenomenal.”

The Volunteers shot just 26% from the field as a team. Arkansas was little better, shooting 31% despite not making a field goal in the final 5:17.

Turnovers made the biggest difference as Tennessee committed 15, leading to 13 Arkansas points, while the Razorbacks had 10 giveaways, off which the Vols managed just two points.

The two teams are tied for third in the SEC, a game behind Kentucky and two games behind Auburn, with four regular-season games left.

“What they (Arkansas) are doing right now is not easy,” Musselman said. “We knew with seven games to go how difficult our schedule is, was, still is. Yeah, we lost to Alabama by one, but could have won that game, too. I’m overly pleased with how we’re playing.”

Arkansas: Has beaten three ranked teams, including then-No. 1 Auburn last week, during its run, all but cementing an NCAA Tournament berth in March.

Tennessee: Will likely remain in the good graces of the tournament selection committee because of its long winning streak before Saturday.

Arkansas: At Florida on Tuesday. The Razorbacks have only one win in Gainesville, Florida, in 1995.

Tennessee: At Missouri on Tuesday for the teams' first matchup of the season. ___