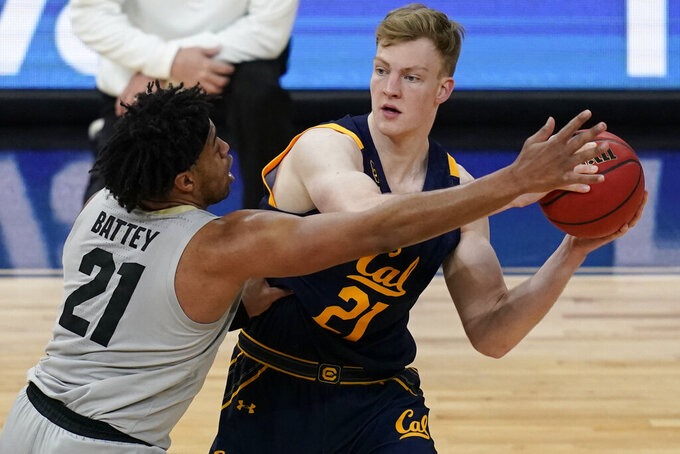 California's Lars Thiemann (21) looks to pass around Colorado's Evan Battey (21) during the first half of an NCAA college basketball game in the quarterfinal round of the Pac-12 men's tournament Thursday, March 11, 2021, in Las Vegas. (AP Photo/John Locher)

LAS VEGAS (AP) — The shots were not falling early, the opponent would not go away late.

Colorado found a way to grind it out, which is all that matters in March.

Evan Battey scored 15 points and No. 23 Colorado shook off a sluggish start to beat California 61-58 in the Pac-12 Tournament quarterfinals Thursday night.

“March is all about surviving and advancing. I think it was Coach Valvano who said that,” Colorado coach Tad Boyle said. “We survived tonight and are advancing. We didn't play our best basketball.”

The Buffaloes and Bears had a long wait after the two previous games went through three overtimes, setting up a true Pac-12 after dark game.

They played like it was Pac-12 shooting after dark once the game started, combining to miss 36 shots in the first half.

Colorado (25-7) finally got a few to fall, using a 15-3 run to go up 11, and withstood a late Cal run to close out a surprisingly difficult win over the tournament's No. 11 seed.

“Northing comes easy in March and we did what we had to do,” Battey said.

Cal (9-20) went on an 8-0 run keyed by Matt Bradley to get back in it and pulled within 61-58 on Jalen Celestine's three-point play with 41 seconds left — seven seconds after he made three free throws.

Makale Foreman had a good look to tie it, but his 3-pointer rimmed out with 2 seconds left.

Grant Anticevich led the Bears with 11 points and Bradley had 10 points on 3-of-11 shooting before fouling out.

“I thought our team played super hard and gave an effort to compete,” Cal coach Mark Fox said. “The fatigue in the back-to-back game in offense showed, but I think our defense was very good. It's disappointing when a last-second shot goes in and out like that.”

Cal had the biggest upset of the opening round by crushing rival Stanford 78-56.

The Bears and Colorado split the regular-season series, each winning on their home floor. Cal had won two conference games before beating the Buffaloes 71-62 on Feb. 13 behind Bradley's career-high 29 points and late 3-pointer.

Colorado got a bye into the Pac-12 quarterfinals but looked more rusty than rested, needing more than five minutes to score.

The Buffaloes missed their first seven shots and kept clanging once they got the first one to fall, missing 14 of their first 19 shots. Leading scorer McKinley Wright was 1 for 7 in the first half, letting out a scream and balling his fists after one shot rimmed out.

“Cal made us rush tonight,” Boyle said. “They really sped us up.”

“They're a good defensive team and especially in the first half they were playing really good defense,” Anticevich said. “We were only able to get a few shots to drop here and there, but I think we were doing the right things."

Cal did a good job of mucking up the game in the first half and went on a late run to make it close but missed one final shot to get bounced from the bracket.

Colorado needed a while to get going after getting a bye into the quarterfinals and the late start. The Buffaloes will need a better offensive performance if they're going to get past No. 2 seed USC in the semifinals.

Bradley was the Pac-12's third-leading scorer during the regular season at 18.3 points per game, but didn't crack double figures until late in the quarterfinals.

Eli Parquet had a lot to do with it.

Colorado's 6-foot-3 junior guard spent most of the night in Bradley's face, preventing him from getting the ball, making it difficult when he did try to get off a shot.

Bradley went 1 for 6 from 3 and had three turnovers.

“Eli doesn’t back down from nobody,” Battey said. “He might not be the biggest, but he’s going to compete.”

Cal's frustrating season is over.

Colorado moves on to Friday's semifinals against No. 24 USC.