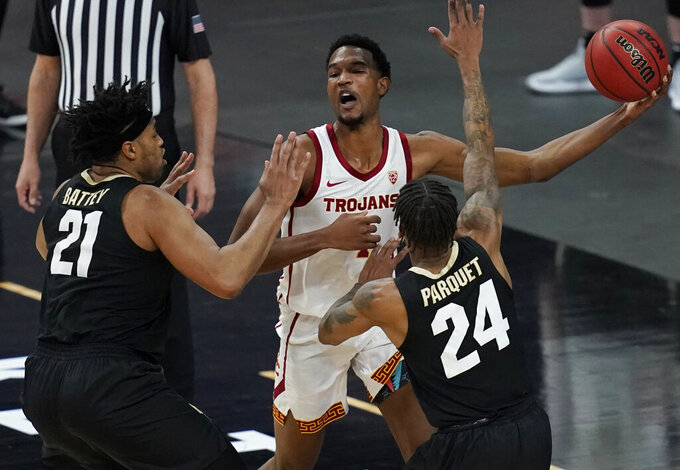 Southern California's Evan Mobley (4) passes around Colorado's Evan Battey (21) and Eli Parquet (24) during the first half of an NCAA college basketball game in the semifinal round of the Pac-12 men's tournament Friday, March 12, 2021, in Las Vegas. (AP Photo/John Locher) 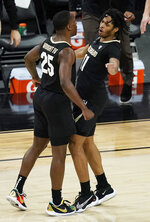 Wright showed off his toughness by returning and the Buffaloes their grit by pulling out a last-second win.

One more victory and they'll be Pac-12 Tournament champions for the first time in nine years.

D'Shawn Schwartz scored on a rebound slam with 3.3 seconds left, Wright shook off an elbow to the head to score 24 points and No. 23 Colorado held off No. 24 Southern California 72-70 in the Pac-12 Tournament semifinals Friday night.

“The big thing with our team is we don't panic,” Colorado coach Tad Boyle said. “This team just has a resiliency, a fight that's fun to be around.”

Evan Mobley kept USC (22-7) in it in the first half and dominated at both ends, finishing with 29 points, nine rebounds and five blocked shots.

The 7-foot freshman also helped the Trojans rally from a 10-point deficit with 4 1/2 minutes left. He hit a 3-pointer then Tahj Eaddy scored on a 3-point play with 35 seconds left to tie the game.

On Colorado's final possession, Wright had a 3-pointer rim out and Schwartz sneaked along the baseline to slam the ball down. Wright sealed it with a steal, deflecting a pass intended for Eaddy to prevent the Trojans from getting off a final shot.

“McKinley Wright pushed (Eaddy) right in the back and they didn’t call it," USC coach Andy Enfield said. "And that was the game.”

The third-seeded Buffaloes (22-7) shot 12 of 24 from 3-point range to reach the Pac-12 Tournament title game for the first time since winning it in 2012. Colorado moves on to play No. 5 seed Oregon State on Saturday.

“One more, that's what we keep yelling in the locker room," said Wright, who went 4 for 6 from 3-point range. "It ain't going to be easy, but we know we've got the pieces to do it.”

The only ranked teams in the bracket had their hands full just to get to the semifinals.

USC needed two overtimes to outlast No. 7 seed Utah for a 91-85 win in the quarterfinals. Colorado had to overcome an abysmal-shooting first half and hold off 11th-seeded California late for a 61-58 win.

The Buffaloes got off to a much better start against USC, using an 11-0 run to go up 14-6, but appeared to suffer a huge loss when Wright was elbowed in the head after tangling with USC's Chevez Goodwin. The unanimous first-team All-Pac-12 guard lay on the floor for several minutes and had to be helped to the locker room.

Colorado didn't seem to miss a beat, continuing the run to push its lead to 20-6, and Wright came back a few minutes.

“Colorado tried to get into us early, deny all our catches, make everything tough for us,” said Eaddy, who had 11 points, five rebounds and five assists. “As the game progressed, we settled in a little bit and got into a groove.”

USC fell into a big hole, was able to rally, but missed one critical block out that cost it the game.

Wright proved he's one of college basketball's toughest players and Colorado showed a bit of grit by holding off the athletic Trojans.

One of the reasons Colorado didn't fall off when Wright went down was the play of Keeshawn Barthelemy.

The freshman point guard had seen limited action during the final stretch of the regular season while playing behind Wright, but gave the Buffaloes a spark while their leader was in the locker room. He hit a pair of 3-pointers and finished with eight points on 3-of-4 shooting in eight minutes.

“I’m so proud of Keeshawn and so excited for his future,” Wright said. “It’s hard for him being a freshman and being behind me and not playing a lot of minutes every game. And he stayed strong throughout the whole season.”

USC should be a lock to make the NCAA Tournament.