No. 23 Colorado State ekes by Utah State in MWC quarters 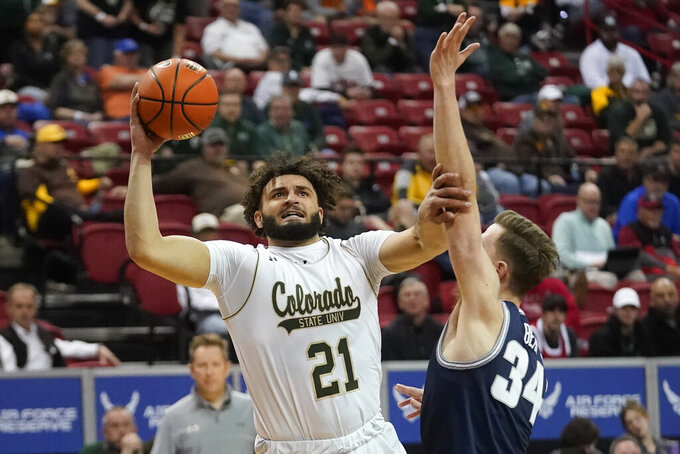 Isaiah Stevens drove the lane in the final seconds, then passed across the paint to Jacobs, who laid in a tie-breaking layup.

Jacobs played just 14 1/2 minutes and had zero points prior to the final shot.

“It’s just a next-play mentality,” Stevens said. “I feel like it speaks volumes to who he is as a person and who we are as a program. ... As long as there is time on the clock, you still have a chance to make something happen.”

Stevens led the Rams (25-4) with 14 points and seven rebounds, and MWC player of the year David Roddy added 13 points and six boards.

Brandon Horvath led Utah State (18-15) with 17 points, and Justin Bean had 15 points and 13 rebounds. In the end they just came up with one less play than their opponent though.

“I’m proud of our guys for finding a way to win tonight,” coach Niko Medved said. “Kind of par for the course, right? The first two games came down to the final possession, we just didn’t want to feel left out.”

Stevens put Colorado State ahead 51-47 with 56 seconds left before the Aggies scored four straight points. Bean then tied it with two free throws with 13 seconds left, before Jacobs killed their chances of an upset just a few moments later. Finally, Utah State air-balled a desperate, full-court 3 after Jacobs’ basket.

Utah State held the Rams to just 28 first-half points and made things challenging for CSU all around the floor. Between an aggressive effort from Roddy and a productive outing from Stevens, the Rams had too much firepower in the end for the seventh-seeded Aggies.

CSU will face the winner of the San Diego State-Fresno State game in the semifinals Friday night.