No. 23 LSU seeking stability, and another NCAA Tourney run 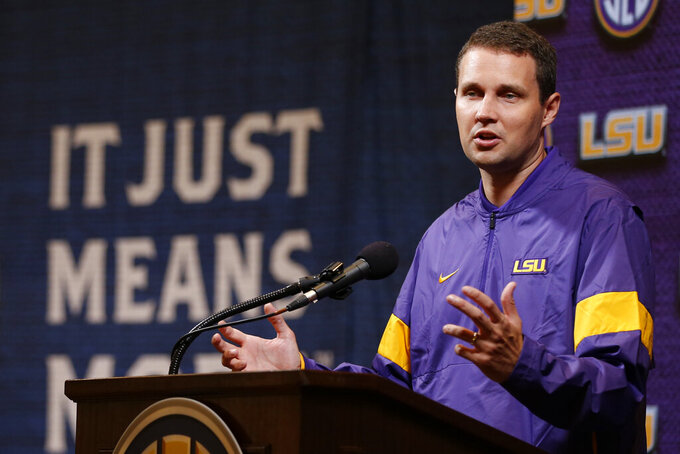 They also hope that what they went through last year — from the preseason shooting death of teammate Wayde Sims to the late-season suspension of coach Will Wade — has instilled in them a resilience that will serve them well going forward.

"We definitely dealt with a lot before the season even started," Mays said, adding that the team planned a visit to Sims' grave site on the one year anniversary of his death. "All the things that happened that year have helped each of us grow as individuals outside of basketball and helped us develop a confidence that I feel like you can only develop through our type of experience — because it wasn't just something normal. But I'd say we came out very successful."

Indeed, LSU is coming off one of its most successful seasons in program history. The Tigers won the SEC regular-season championship, but lost in the third round of the conference tournament against Florida after receiving a double bye. LSU still received an at-large bid to the NCAA Tournament and advanced past the first two rounds before falling to eventual Final Four participant Michigan State.

LSU's 28-7 record tied the 2000 Tigers for the second most single-season victories in program history — behind only the 1981 Final Four team that went 31-5.

The Tigers' final three victories came without Wade, who was suspended before the regular-season finale after he initially declined to meet with top LSU administrators about a leaked FBI wiretap transcript of one of his phone calls with a man convicted of illegally funneling money to recruits and their families. The call centered on Wade's effort to recruit guard Javonte Smart, who remains with the team.

When the NCAA Tournament had ended, Wade and a newly hired attorney finally met with administrators and the coach was re-instated. After that, four prominent players who opted to be evaluated for the NBA draft — Mays, Smart, forward Emmitt Williams and guard Marlon Taylor — returned to LSU.

Some other things to know heading into LSU's 2019-20 season:

While three starters — forward Naz Reid, point guard Tremont Waters and center Kavell Bigby-Williams — have turned pro, LSU has five regulars back and got a boost from the addition of 6-foot-9 forward Trenden Watford, a five-star recruit from Alabama.

Wade called Manning "phenomenal" after the Tigers' recent trip to Spain for a series of exhibitions.

"We have plenty of skill. We have better shooting," Wade began. "We have good enough players, but can we do a lot of the little things? Can we get loose balls? Can we get stops? Can we stop runs by having good offensive possessions? Those are some of the traits last year's team was able to develop."

Mays and Smart are expected to form the starting back court and both can play point guard, giving LSU added versatility.

"Both of us, with our ability to play off the ball, we can kind of take the pressure off each other as far as making decisions for the team, whether it's calling a play or just getting in the paint and making a play for someone else," Mays said.

Wade said a newly installed offense that relies less on ball screens and more on motion should create more opportunities for premier forwards including Watford, Williams and Darius Days.

Their ability to shoot from 3-point range makes the new offense a good fit, Wade noted.

"We're going have five guys out there at any one time just about that can make a shot. So, when you do that they're going come out and guard you and that opens the lane up," Wade said. "It's going be a huge benefit, especially to those three bigger guys: Emmitt, Days and Watford. The offense is kind of made for those guys."

The Tigers have been impressed by Watford, who led Mountain Brook to three consecutive Alabama Class 7A state championships. He averaged 23.7 points, 11.8 rebounds, 3.6 assists and 2.5 blocks during his senior season and finished his career with 3,567 points.

"He's so versatile, he can play pretty much all five spots, which is going to be big for us," Mays said. "He's going to have a great year."