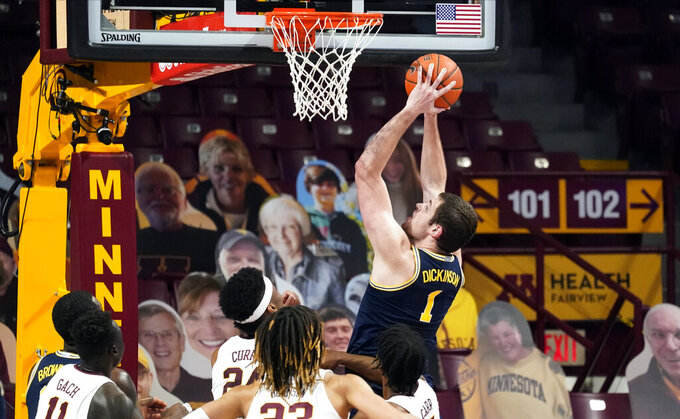 Michigan's Hunter Dickinson (1) shoots and scores as four against Minnesota players watch in the first half of an NCAA college basketball game, Saturday, Jan. 16, 2021, in Minneapolis. (AP Photo/Jim Mone) 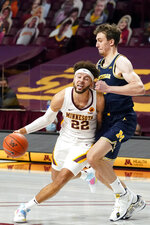 MINNEAPOLIS (AP) — Liam Robbins had 22 points and eight rebounds in 22 minutes to lead No. 23 Minnesota to a 75-57 victory over No. 7 Michigan on Saturday, handing the Wolverines their first loss.

Marcus Carr scored 17 points and Gabe Kalscheur added 10 points for the Gophers (11-4, 4-4 Big Ten), who played their seventh straight game against an opponent ranked in the Associated Press poll. Minnesota never trailed, holding the best shooting team in the conference to a season-low score and a season-high 20 turnovers.

According to Minnesota’s research, this is the most consecutive ranked opponents for any NCAA team since St. John’s played eight Top 25 teams in a row in 2011.

Chaundee Brown Jr. scored 14 points and Isaiah Livers added 11 points for the Wolverines (11-1, 6-1), who played without senior guard Eli Brooks due to a foot injury suffered in a recent practice.

The Gophers were back in their happy place after five days to recuperate and refocus from decisive defeats last week at Michigan and Iowa. Given that they’re not playing in front of fans, with no raucous student sections to create an energy boost at home or a daunting distraction on the road, the Gophers have displayed a remarkably split personality this season.

Their four losses — all to Big Ten teams ranked in the top 14 of the latest poll and all away from home — have come by an average margin of 19.8 points.

Robbins made all three of his 3-point attempts in the second half and exacted some revenge on Hunter Dickinson, who got the better of him in the first matchup of the 7-footers and two of the best big men in the nation. Dickinson, who had 28 points against the Gophers at home while going 12 for 15 from the floor, scored nine points and had five turnovers.

The Gophers missed their first 12 attempts from 3-point range, too often settling for a long try against Michigan's intense ball pressure. Their own defense, against the best-shooting team in the Big Ten, was more than good enough to cover up for the shot selection issues.

The Wolverines had seven turnovers in the first seven minutes and just never established a rhythm in their half court. The Gophers had a 13-4 edge in fast-break points, 23-9 in scoring off turnovers.

Robbins picked up a reckless second foul less than four minutes into the game, but during the extended bench stay Eric Curry ably filled in and finished with six points and three steals.

Livers hit a 3-pointer late in the first half to slice Minnesota's lead to 24-21, the only time Michigan was within one possession since the opening minutes of the game. Brown swished a corner 3-pointer to make it 41-35 with 13:58 left, but Robbins and the Gophers almost immediately took over after that without letting up.

Kalscheur finished a fast break with a 3-pointer after a block by Robbins, who followed with a tomahawk dunk in the lane on the ensuing possession. Carr and company kept attacking the basket off the dribble down the stretch, the most sound strategy for a team that entered the weekend second in the country in free throw attempts.

SATURDAY, IN THE BARN

The Gophers didn't play a single Saturday home game in 2019-20. This season, with no fans able to buy tickets due to COVID-19 restrictions, five of their 10 conference home games are on Saturdays.

Michigan: Fresh from their 77-54 thrashing of No. 9 Wisconsin, a third win by 19-plus points in as many matchups with ranked foes, the Wolverines have been playing like a Final Four team. At some point in this loaded league, a setback was bound to happen.

Minnesota: Finally through the thick of their front-loaded conference schedule, the Gophers have stacked up so many quality wins that simply landing an at-large NCAA Tournament bid would be a letdown. The only time in the last 15 years they've finished with a winning Big Ten record and higher than sixth place was 2016-17, when they were 11-7. Pitino improved to 3-11 against Michigan.

Michigan will likely stay in the top 10 when the next AP poll is published on Monday. Minnesota, the sixth Big Ten team ranked, will undoubtedly slide up several spots.