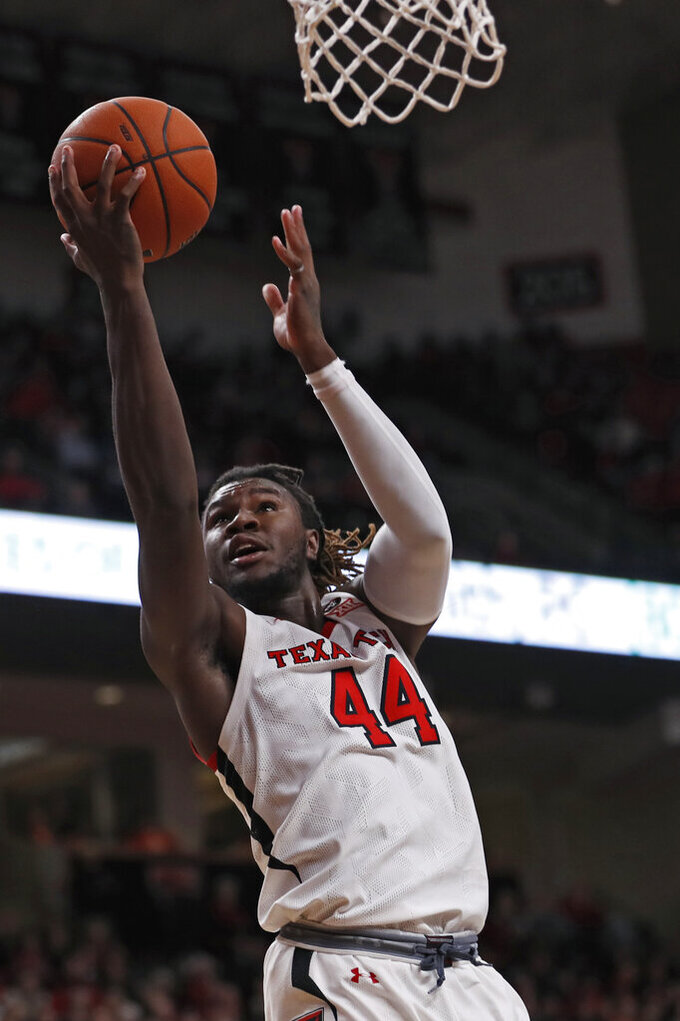 Texas Tech's Chris Clarke (44) lays up the ball during the first half of an NCAA college basketball game against Cal State Bakersfield, Sunday, Dec. 29, 2019, in Lubbock, Texas. (AP Photo/Brad Tollefson)

LUBBOCK, Texas (AP) — No. 23 Texas Tech's next nonconference home game will almost certainly prove to be a bit more challenging.

But the Red Raiders have their first six Big 12 games before No. 19 Kentucky visits the plains of West Texas.

For now, fourth-year coach Chris Beard feels like his team got a good win in their last game before conference play, 73-58 over Cal State Bakersfield on Sunday.

“That's a good team, it's a postseason team, it's a team that will compete for the (WAC) championship,” Beard said. “I'm about as pleased as I've been in a long time sitting up here after a victory. The main reason why is I think we beat a very good, well-coached team.”

Kyler Edwards scored 18 of his 20 points after halftime as the Red Raiders (9-3) pulled away in their 54th consecutive nonconference home win — a streak that stretches over seven seasons.

“We work so hard to build this program to the point where people can be proud of it and we can be consistent,” Beard said. “Not sure we're there yet, but we're getting close.”

Freshman Jahmi'us Ramsey also had 20 points for Texas Tech, with eight of those coming in a 13-2 run midway through the second half that provided a double-figure lead the rest of the game.

Bakersfield was within 33-31 early in the second half before Edwards made three consecutive 3-pointers in a span of 75 seconds to stretch the lead to 42-31, before the Roadrunners cut the gap to three.

“My teammates encouraging me to get more buckets, get more looks,” Edwards said, when asked about the second-half surge. He had taken only four shots before then, including missing a 3-pointer after halftime.

The Red Raiders, the Big 12 co-champion with Kansas State last season before losing to Virginia in overtime in the national championship game, are 7-0 at home this season and have won 14 in a row overall in Lubbock.

That will be on hold until Jan. 25 for the Big 12/SEC Challenge against the Kentucky Wildcats — who are coming off an overtime win Saturday against rival No. 3 Louisville, which was the top-ranked team when it lost to the Red Raiders earlier this month.

Tech led 57-43 after Ramsey had a steal that he turned into a breakaway dunk with 9 minutes left. The Red Raiders converted 17 turnovers by Cal State Bakersfield into 26 points.

The Roadrunners were within 44-41 on a 3-pointer by Edler-Davis with 12:54 left. But they had three bad-pass turnovers in just under three minutes that led to seven points in the Tech run. Ramsey had another steal that resulted in a fastbreak layup by Edwards, and Ramsey made a 3-pointer after Davide Moretti's steal.

Cal-State Bakersfield: The Roadrunners have never beaten a Top 25 team, and this is the second year in a row with a road loss against a ranked Big 12 team — the 2018-19 season opened with a loss at then-No. 20 TCU.

Texas Tech: The Red Raiders have won four games in a row, a streak that started with a win over then-No. 1 Louisville. ... The Red Raiders are 57-5 overall at home under Beard, 34-0 against non-conference teams.

Texas Tech will go into Big 12 Conference play still ranked. The Red Raiders were as high as 11th earlier this season before three losses in a row briefly dropped them out of the poll.

Cal-State Bakersfield plays its first two WAC games at home, next Saturday against Grand Canyon and then Jan. 8 against California Baptist.