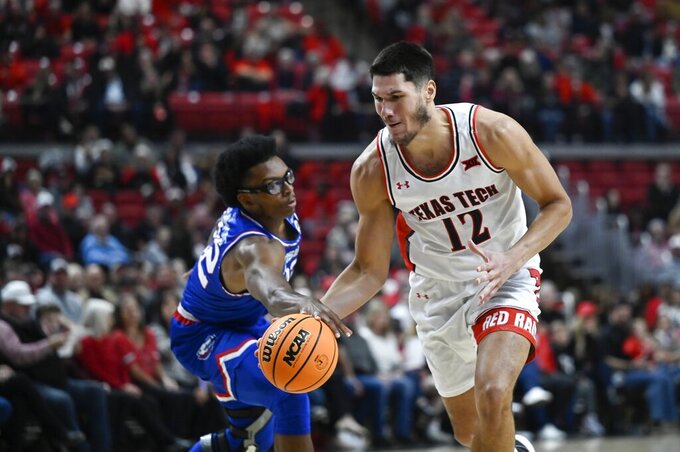 LUBBOCK, Texas (AP) — Kevin Obanor and De’Vion Harmon each scored 15 points to lead No. 23 Texas Tech to a 64-55 victory against Louisiana Tech on Monday night.

The Red Raiders (3-0) used a late 14-1 scoring run to take control of the game after the Bulldogs had closed within 39-37 with 14:05 remaining. Louisiana Tech never got closer than seven points the rest of the way.

“On defense, I thought we were really good early,” Texas Tech coach Mark Adams said. “But sometimes with a young team, they lessen up a little and freelance. There were times out there we were our own worst enemy, but give Louisiana Tech credit. We have some young kids, and there are going to be a lot of growing pains. We did win, but we made a lot of mistakes. That’s frustrating for fans and for the coaching staff."

The Bulldogs were limited to 20-of-53 shooting the floor, including 6 for 24 from 3-point range by the Red Raider defense. Texas Tech shot 23 for 46 from the field and 7 for 18 from long distance.

Isaacs connected on a critical 3-pointer with just more than five minutes remaining that pushed the Red Raiders’ lead to 56-45. Two free throws by Daniel Batcho with 30 seconds put the game out of reach.

“We did a good job of coming together tonight,” Isaacs said of the way the Red Raiders responded to the Bulldogs’ comeback attempts. “We moved the ball, we figured things out, and we came out with a victory.”

The Red Raiders started quickly, racing to an eight-point lead and holding the Bulldogs without a shot on their first five possessions. Texas Tech built a 16-2 advantage before Louisiana Tech began chipping away, cutting its deficit to 24-15 on a 3-pointer by Keaston Willis with just more than six minutes remaining in the first half.

The Bulldogs put together their best run in the last 2:30 of the half, scoring 10 unanswered points and closing within 30-27 before Obanor made a layup just before intermission, giving Tech a five-point lead.

“Give our guys credit,” Adams said. “Harmon played really, really well for us tonight, and he hit a big shot with the clock running down that was a real bright spot. Overall, I thought defensively we played a good game, not great, but good.”

Texas Tech completed a three-game homestand unbeaten as it prepares for three games in Hawaii next week in what is expected to be a step up in competition. Louisiana Tech fought throughout and had several chances to score its first win against a nationally ranked opponent since 1991.

Texas Tech: Travels to Hawaii for the Maui Jim Invitational, where it will open against No. 10 Creighton on Monday.