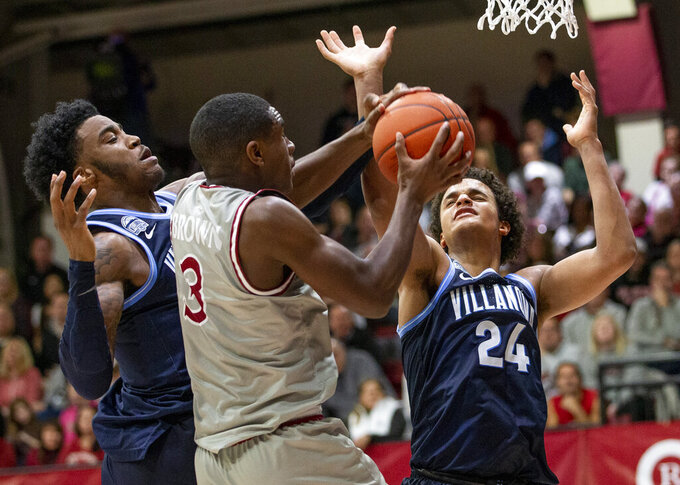 Instead, the Wildcats found a final burst of energy, and that spoiled a frantic rally by their Main Line neighbors.

Saddiq Bey scored 22 points, Collin Gillespie had 20 and No. 23 Villanova held off a second-half comeback from Saint Joseph’s to win 78-66 Saturday.

“This will be good for us,” Villanova coach Jay Wright said. “We’ve gone through a really tough stretch here, and we really haven’t had a chance to practice. Now, we’ll get a gap where we can work on some things. And it’s always good when you can work on it after a win.”

Justin Moore added 14 points and Jermaine Samuels had 12 for Villanova. The Wildcats have won 28 of 29 against Big 5 opponents since 2012.

The Hawks have lost seven straight overall and eight consecutive against Villanova since 2011. Daly was the only Saint Joseph's player with more than eight points.

“I’d much rather not had the 32 points if we ended up winning the game,” Daly said. “That was the most important thing, and it didn’t happen.”

Saint Joseph's got within three on two occasions in the second half, including after Daly's two free throws with 4:08 left.

The Wildcats pulled away thanks to 8-for-8 shooting from the foul line in the last 2:11.

“We had a lot of tough games like this last year that helped us out,” Bey said. “These games help you mature.”

Villanova: After a 2-0 week and winning three straight over Big 5 opponents, Villanova will likely remain in the AP Top 25 somewhere around their current ranking. The team has two games — Saturday against Delaware in Newark, a Dec. 21 home game against Kansas — before starting Big East play on Dec. 30 against Xavier.

Saint Joseph’s: The Hawks — in their first season under coach Billy Lange — showed some signs of life despite poor shooting.

“There are no such things as moral victories,” Lange said. “However, I’ve kept a notebook that asks if we played hard that I fill out when I get into my car or on the bus after a game. And clearly, we did that today against a national championship program.”

Villanova: The Wildcats are off until next Saturday when they play Delaware in the Never Forget Tribute at the Prudential Center in Newark, New Jersey.

Saint Joseph’s: The Hawks travel to Temple on Tuesday night.