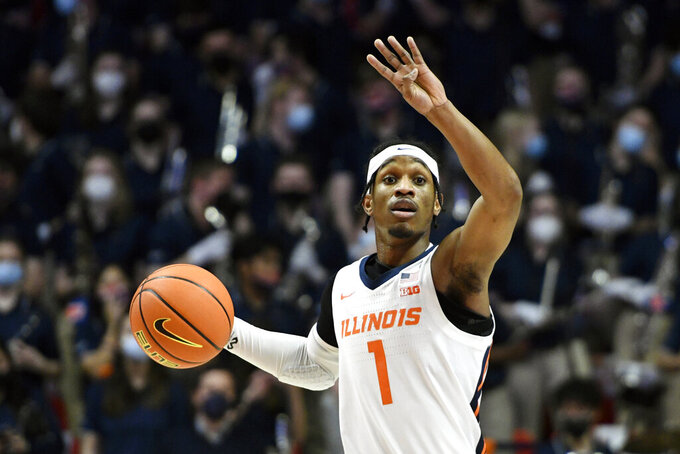 Illinois' Trent Frazier sets up a play during the first half of an NCAA college basketball game against Michigan State, Tuesday, Jan. 25, 2022, in Champaign, Ill. (AP Photo/Michael Allio)

CHAMPAIGN, Ill. (AP) — Trent Frazier scored a game-high 16 points, and No. 24 Illinois held on to beat No. 10 Michigan State 56-55 on Tuesday and take sole possession of first place in the Big Ten.

Asked how his team responded with Cockburn, Illinois coach Brad Underwood laughed and said, “Obviously better than our last game,” referring to the lopsided loss 81-65 loss at Maryland on Friday.

The Illini led by as many as 15 points early in the second half before Michigan State (15-4, 6-2) mounted a furious comeback in the final four minutes. Illinois also didn't score for the last five minutes.

Down by two, the Spartans had a chance to tie the game with less than a second left after Coleman Hawkins fouled Malik Hall as Hall drove to the basket. He missed the first free throw and made the second, then time expired.

Alfonso Plummer added 11 points for Illinois and Benjamin Bosmans-Verdonk had 8 points filling in at center for Cockburn.

Marcus Bingham Jr. had 13 points to lead the Spartans, while Gabe Brown had 10 and Tyson Walker added 9.

“Who gave us a chance?” Underwood said. “You had two preseason All-Americans out, it doesn’t matter. When you have character and guys who are together, you can do a lot of things.”

Illinois dominated the first half by going on two runs, 13-7 and 7-0, primarily on Frazier’s perimeter shooting. The Illini also scored 15 points off of nine Michigan State turnovers and led 34-20 at the half.

Michigan State’s last lead was 7-4 two minutes into the game. Illinois tied the game on a Frazier three-pointer and the Illini never trailed again.

Illinois' Luke Goode was 3 of 4 from beyond the 3-point line, ending up with nine points and four rebounds. Most of his shots came in the first half when Illinois was building a substantial lead.

Spartans coach Tom Izzo was impressed by the freshman’s performance.

Izzo said he was “disappointed” in the Spartans' performance: “They played with more energy than we did in the first half. We’ve been consistently inconsistent.”

Izzo also praised Frazier, calling him "a hell of a player. He’s a credit to the league to come back (for his fifth year). Illinois is a team that can light it up from everywhere.”

Frazier took the praise in stride. “This is special. This has been a special five years for me. I’m glad to call this place home.”

This was a huge game for both teams, and the win was doubly sweet for a depleted Illini squad that had lost back-to-back games in Cockburn’s absence. Michigan State was outplayed for most of the game, although the Spartans made it interesting in the final few minutes.

Expect Illinois to move up a couple of spots, while Michigan State will likely drop a spot or two,

Illinois: Travels to Northwestern on Saturday.