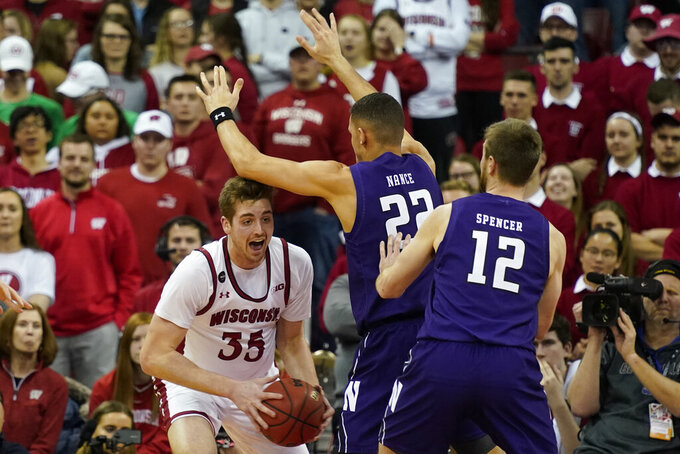 MADISON, Wis. (AP) — No. 24 Wisconsin will have a shot to clinch at least a share of the Big Ten title. The Badgers just need to tighten up a few things to improve their chances.

Nate Reuvers scored 11 points and Wisconsin struggled through a 63-48 victory over Northwestern on Wednesday night, moving into a three way-tie for first place in the conference.

They have work to do after shooting just 39% against the 12th-worst defense in the conference.

Neither team exactly put on an offensive show. The Badgers found a way in the second half to put things together and pull away.

The Wildcats, who shoot 42% from the field on average, started the game 1 for 10 with five turnovers in the first nine minutes. But after trailing by 17 points with 5:48 left, Northwestern cut the Wisconsin lead to 32-28 just before half.

The Wildcats’ offensive woes resurfaced after the break as they started 1 for 12 and fell behind 48-33 with 8:51 left.

Wildcats coach Chris Collins said his struggled to knock down shots, even when they got good looks. At one point in the first half, they had well-executed plays that resulted in open shots that they missed.

Collins said the most frustrating thing was Northwestern wasn’t able to take advantage of the opportunity they gave themselves by largely keeping Wisconsin's offense in check.

The Badgers had averaged 75 points a game over their six straight wins coming into the game.

“I thought our defense did enough,” Collins said. “It was just our inability to score to keep us within striking distance.”

The Badgers rely heavily on the 3-point shot, averaging nearly nine a game and shooting 35% from the arc. They made the first 3-pointer they took on consecutive possessions to start the game. From there, Wisconsin made 5 of their next 22.

The win was Wisconsin coach Greg Gard’s 100th, improving his record to 100-57 since taking over midway through the 2015-16 season from former coach Bo Ryan.

“I’m just happy for all the people who have been a part of it,” Gard said. “I haven’t done this by myself.”

Wisconsin’s final home game of the season was a special night for two seniors, including one who started his career with the Badgers more than 25 years ago.

Former player Rashard Griffin left Wisconsin after his sophomore season in 1995 to turn pro and later returned to the university and graduated. He was accompanied during the festivities by the parents of Wisconsin assistant coach Howard Moore, who was Griffin’s teammate and has been on leave this season recovering from a May car crash that killed his wife and daughter.

Meanwhile, Michael Ballard, who had played nine minutes all season coming in, was played in the final minute of play. He drove through several Northwestern defenders in the closing seconds for a layup, even though teammate Brevin Pritzl said it was a “blatant” travel that the refs let go.

“He got his name in the scorebook, so that’s all that matters,” Pritzl said.

Northwestern: The season has been a struggle for the Wildcats. They showed fight at times, but lacked any kind of offensive attack to give them a chance at the upset.

Wisconsin: The Badgers have gone from a 5-5 start in December to a three-way tie for first in the Big Ten, joining Maryland and Michigan State with one game to play in the regular season.

Wisconsin: Travels to Indiana on Saturday.