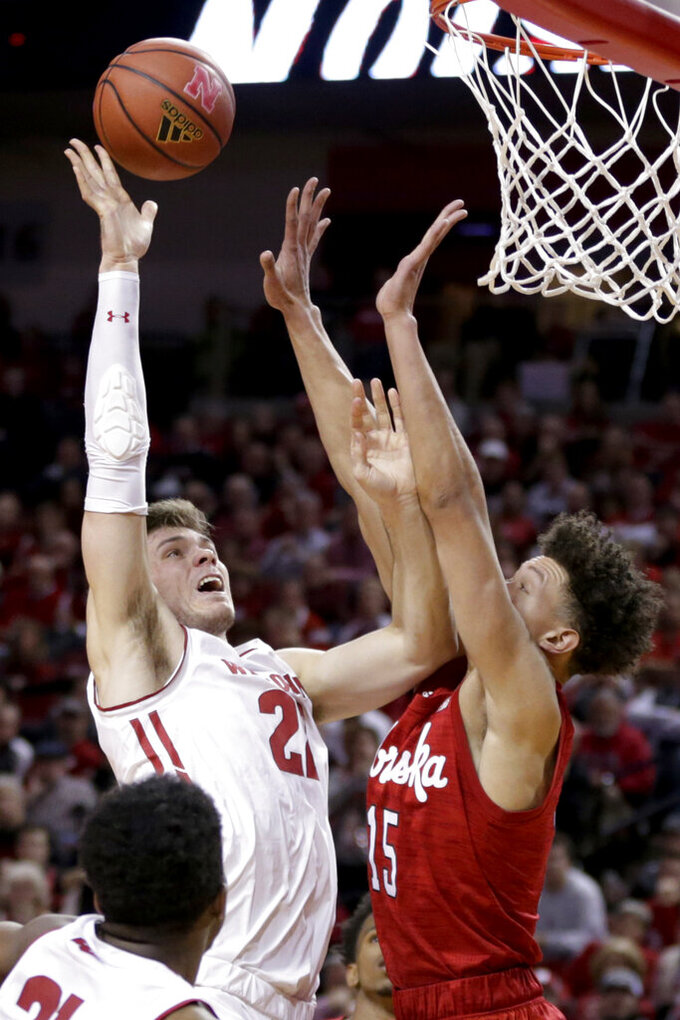 Wisconsin's Ethan Happ (22) goes for a layup against Nebraska's Isaiah Roby (15) during the first half of an NCAA college basketball game in Lincoln, Neb., Tuesday, Jan. 29, 2019. (AP Photo/Nati Harnik) 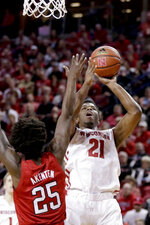 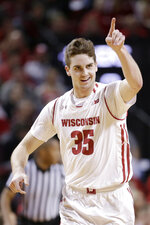 LINCOLN, Neb. (AP) — Wisconsin star Ethan Happ had trouble getting going on the offensive end in the second half.

Brad Davison was happy to help.

The sophomore guard scored 10 of his 13 points after halftime to fuel No. 24 Wisconsin's decisive surge in a 62-51 win over Nebraska on Tuesday night.

"He made some big shots at the end," Badgers coach Greg Gard said. "We got some separation and he closed the door. He's a gamer like that. He's taken and made some great shots already in his brief career. He's not shy about hunting them down."

The Badgers (15-6, 7-3 Big Ten) won their fourth straight game, frittering away a big first-half lead before pulling away late.

The Cornhuskers (13-8, 3-7), playing their first game without injured forward Isaac Copeland, lost their fourth straight. Their 51 points were a season low, and they made just two field goals over the last 8½ minutes.

Happ and Nate Reuvers scored 10 points apiece for Wisconsin. Happ took only three shots in the second half, making two.

Davison missed four of his five shots in the first half but hit four of eight the rest of the way. All 10 of his second-half points came during an 18-4 run that turned Wisconsin's 40-37 deficit into a 55-44 lead with 4½ minutes left.

"They were shots I know I can hit, shots I've practiced hundreds and hundreds of times," he said. "I trust my shot. I know if I miss a few in the first half, I'm going to hit them in the second half. When the games on the line, I just try to finish the game."

Roby, who moved from center to power forward in Copeland's absence, had 18 points, nine rebounds, three assists and two blocks. James Palmer had 14 points and Thomas Allen added 10, but Glynn Watson Jr. was limited to five points on 2-of-10 shooting.

"One thing we have to do is to get guys like Glynn and James to relax a little bit," Nebraska coach Tim Miles said. "Not all the burden is on you. I thought we took some quick shots trying to do our own thing. You have to trust everybody."

The Huskers, who trailed by as many as 14 in the first half, had tied it at 32-all when Roby spun around Happ for a left-handed lay-in. Miles went to one knee and pumped his fist as the ball went through the hoop and Happ was called for a foul.

There would be no more celebrating for Miles. Soon the Badgers began their decisive surge and Nebraska went into a long stretch with no field goals.

"We knew this conference season would be tough even with a full team," Roby said. "Our schedule's not getting any easier. We have to keep competing."

Wisconsin: Any road win is good, and the Badgers have won six of their last seven in Big Ten play. This one wasn't particularly pretty at times, but Davison and others stepped up on a night Happ was held mostly in check.

Nebraska: The Huskers are a mess as they try to adjust to the loss of Copeland and a crisis of confidence. They outrebounded Wisconsin 45-37 and a whopping 18-8 on the offensive end, but only mustered seven second-chance points. They were just 10 of 25 on shots at the rim.

Wisconsin reserve Charles Thomas played one of his stronger games, with five points, three rebounds and a blocked shot in six minutes.

"I thought he gave us a boost at a time Reuvers was in foul trouble and Ethan looked a little fatigued and decision-making wasn't great at times," Gard said. "Charlie was able to extend some possessions ... at a time when Nebraska was gaining some momentum and the place was starting to fill up with noise a little bit. He was our answer and he gave us a big boost. At the time it was much needed."

Wisconsin: Hosts No. 21 Maryland on Friday.