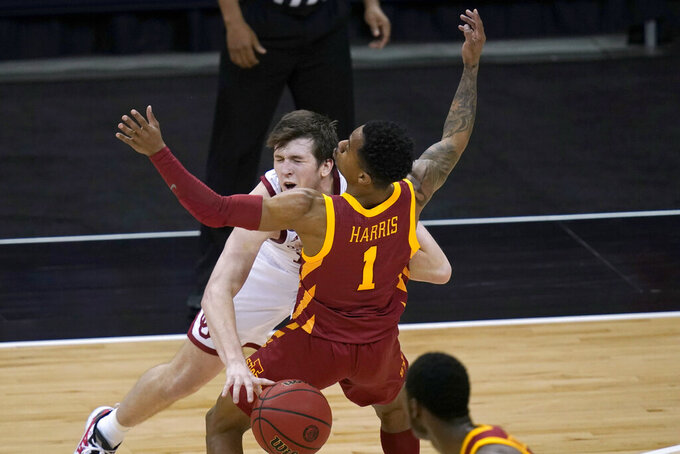 Oklahoma guard Austin Reaves, back, is fouled by Iowa State guard Tyler Harris (1) during the second half of an NCAA college basketball game in the first round of the Big 12 men's tournament in Kansas City, Mo., Wednesday, March 10, 2021. (AP Photo/Orlin Wagner)

KANSAS CITY, Mo. (AP) — Even when Oklahoma built a 19-point second-half lead on slumping Iowa State, the Sooners probably should have known the Cyclones would at least make the game interesting in the closing minutes Wednesday night.

This is the Big 12 Tournament, after all.

So with their first-round game slipping away, the No. 25 Sooners turned to Austin Reaves for an answer. Their standout guard responded by scoring 11 of his 21 points in the closing minutes, allowing Oklahoma to hold on for a nervy 79-73 win that sent coach Lon Kruger's team into a quarterfinal matchup with No. 11 Kansas.

“When you drop a few in a row that go down to the wire,” Kruger said afterward, “you have to get that feeling of winning again. I'm proud of the guys to get that one in the win column.”

De'Vion Harmon added 18 points and Elijah Harkless had 12 for No. 7 seed Oklahoma (15-9), which had lost four straight and were on a shaky NCAA Tournament bubble heading into the weekend. But with a win over the Cyclones, they are likely a lock for the field of 68 — and certainly would be with a win over the Jayhawks on Thursday night.

The Cyclones (2-22) had won four of the past six Big 12 Tournaments, always playing their best in Kansas City, and were the defending champions by virtue of their 2019 title when last year's event was canceled by the pandemic.

Yet this season ended with an 18th consecutive loss that puts coach Steve Prohm's future in question.

“There's really nothing for me to say. There's probably a lot of questions," he said. "I'll meet with (athletic director) Jamie Pollard next week and we'll sit down and talk.”

Rasir Bolton scored 18 points to lead the No. 10 Cyclones on Wednesday night. Jalen Coleman-Lands added 14 and Javan Johnson had 10, though he was just 4 of 15 from the field and 0 for 4 from beyond the arc.

The Cyclones, who hadn't won since beating Jacksonville State on Dec. 20, hung tough until Oklahoma began building a lead out of halftime. The Sooners took advantage of three straight turnovers to begin their charge with Harkless providing a spinning layup in transition and Kur Kuath a reverse ally-oop dunk.

By the time Bolton ended the run, the Sooners' lead had swelled to 51-34 with 12 minutes to go.

It eventually reached 19 before the Cyclones made a final run in the closing minutes. Bolton and Coleman-Lands did most of the damage, taking advantage of some suddenly sloppy offense by Oklahoma to rip off 11 straight points.

But with their lead trimmed to 58-51, the Sooners turned to Reaves, who first knocked down a step-back jumper before answering Coleman-Lands' 3-pointer with one of his own. And when Iowa State kept getting baskets in the final seconds, Reaves and Harkless answered with steady leadership and poise at the foul line.

That allowed the Sooners to hang on for their first Big 12 Tournament win since 2016.

“Sloppy play. We got to take care of the ball, take better shots down the stretch, but we're good, though,” Harmon said. “We just need to win better, finish out the game the right way.”

Iowa State limped home after completing arguably the worst season in school history. The Cyclones' loss total trailed only the 1975-76 team, which went 3-24 — though that team coached by Ken Trickey had a better winning percentage. Along the way, the Cyclones joined the 1936-37 team as the only ones to go winless in conference play.

Oklahoma at one point was ranked in the top 10, but its late-season slide left the Sooners needing at least a win Wednesday night to feel better about their NCAA Tournament hopes. Now, they can nearly locked up a berth with a win over the short-handed Jayhawks, who will be missing David McCormack and Tristan Enaruna due to COVID-19 protocols.

The Sooners play the Jayhawks in the first game of the Thursday night session.