No. 25 UNC cruises past Virginia 63-43 into ACC semifinals 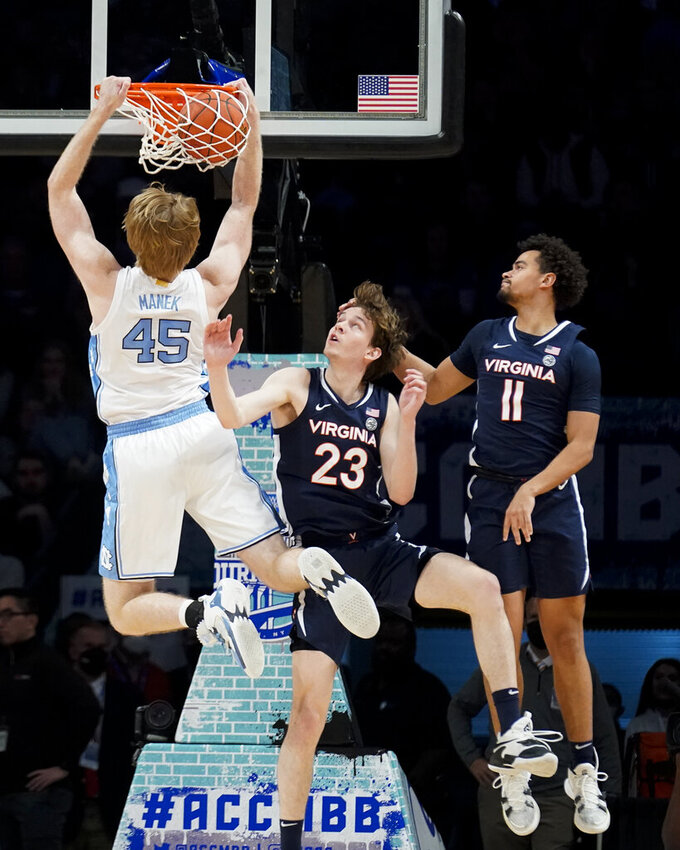 NEW YORK (AP) — Coming off its best game of the season, and one of the biggest regular-season victories in program history, No. 25 North Carolina showed no signs of a Duke hangover at the Atlantic Coast Conference Tournament.

Brady Manek outscored Virginia in the first half on the way to 21 points and the Tar Heels cruised into the semifinals with a 63-43 victory Thursday night.

Five days ago, the Tar Heels completed their regular season by spoiling Duke coach Mike Krzyzewski's Cameron Indoor Stadium farewell. It was easily the best performance of the season for a team that had been inconsistent and unable to come up big against the best opponents.

“That's something we have talked about all season, validating a good performance. Validating who were are as a team,” North Carolina coach Hubert Davis said. “Let's validate the win we had this past Saturday by playing extremely well today.”

North Carolina held Virginia to a season-low for points and the fewest points the program has allowed in the ACC Tournament in the shot-clock era.

Davis, the former Tar Heels star who is in his first season as a head coach, put 6-foot-8 Leaky Black on Virginia's 5-10 point guard Kihei Clark and it made it tough for the Cavaliers to get into their offense.

“I felt like our physicality from the beginning and intensity really just took them out of their flow. They’re like a rhythm team, just the offense they run. So I feel our physicality with them really made them struggle,” Black said.

Jayden Gardner was the only Cavalier in double digits with 17 points.

Virginia went 5 for 27 from the field in the first half, its final bucket coming on a putback dunk by Kadin Shedrick with 6:15 left.

Manek scored 19 in the half on his own, finishing it off with a dunk in the final seconds to put the Tar Heels up 33-13 at the break.

“Credit to Carolina, how hard they played and how hard they guarded us," Virginia coach Tony Bennett said. “And Manek’s first half was special.”

Manek said he didn't realize he had outscored the Cavaliers, “but now that you say it, it sounds about right.”

Armando Bacot had 11 points and 10 rebounds to set North Carolina's single-season record for double-doubles with 24, breaking a tie Brice Johnson (2015-16).

Virginia: A night after the Cavaliers beat Louisville 51-50 while going 0 for 8 from 3-point range, they went 3 for 11 from distance against the Tar Heels. Reece Beekman made Virginia's first 3-point attempt of the game at 15:22 of the first half.

North Carolina: The Tar Heels beat the Cavaliers for the second time this year. Virginia had won seven straight against UNC coming into the season.

Virginia: An NIT bid likely awaits the Cavaliers, snapping a seven-year run of NCAA Tournament appearances — not including the 2020 canceled tournament.

“We improved as the season went on and it didn’t look like it tonight,” Bennett said.