No. 25 Villanova rallies past Xavier in OT in Big East semis 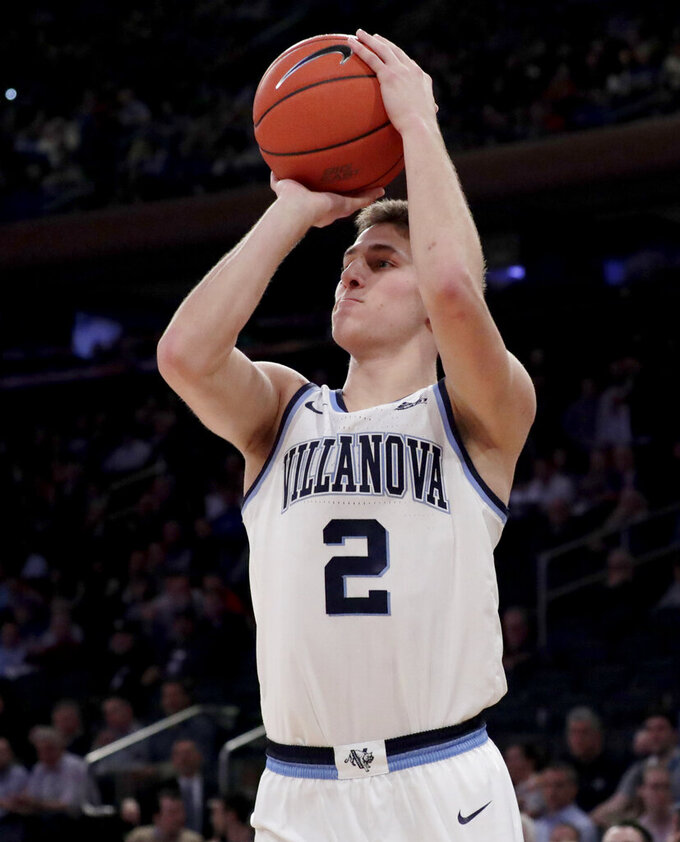 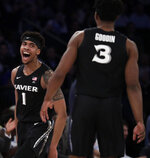 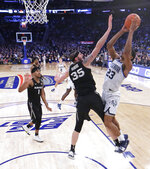 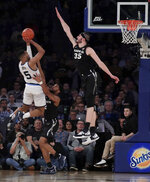 NEW YORK (AP) — Even when Villanova looks vulnerable, it's awfully difficult to put away the Wildcats.

Especially at the Big East Tournament.

"It feels great for this young group to do that. It feels like we've come a long way. Everybody's learning day by day to play Villanova basketball," senior Eric Paschall said.

The top-seeded Wildcats, trying to become the first team in the 40-year history of the Big East to win three consecutive tournament titles, will play Seton Hall on Saturday night at Madison Square Garden. The third-seeded Pirates edged No. 2 seed Marquette 81-79 in the second semifinal.

In a scintillating opener to the doubleheader, Villanova (24-9) erased a seven-point deficit in the last 3 minutes of regulation. Booth and Paschall each scored five points in the extra period as the defending national champions held off a determined Xavier squad.

"Just leadership from two great seniors who have done it their whole careers, their whole lives," Wildcats coach Jay Wright said. "We're just really lucky to have these two."

Paul Scruggs scored a career-high 28 points, a Xavier record for a Big East Tournament game, and Zach Hankins added 18 on 8-of-10 shooting for the fourth-seeded Musketeers (18-15), who had won seven of eight. Scruggs, a sophomore guard, also had a career-best 11 rebounds and seven assists, carrying his team much of the night with an outstanding performance.

Leading scorer Naji Marshall was limited to a season-low two points on 1-of-12 shooting, including 0 for 7 from 3-point range. He fouled out early in overtime after playing nearly 40 minutes.

Xavier has reached the semifinals in all six seasons since joining the Big East, but its only trip to the championship game was a loss to Villanova in 2015.

Samuels finished with 17 points, nine rebounds and four assists for the Wildcats. Paschall scored 12, including a 3-pointer that put them ahead to stay early in overtime following a couple of offensive rebounds.

Booth was one point shy of his career high set Dec. 15 at Kansas. He added seven rebounds and five assists, finding Samuels open for a 3 that made it 68-62 with 2:23 to go.

Xavier squandered a few opportunities in the final minute, and Paschall drained two free throws with 3.1 seconds left to seal it.

"We competed hard, man. We really did. I thought we battled all the way to the very end," first-year Musketeers coach Travis Steele said.

After trailing by 10 late in the first half, the Wildcats were still down seven with 3 minutes left when they finally made their move.

Samuels sank a pair of 3s, including one that caromed high off the front rim, the backboard and through to trim the deficit to 57-56 with 48.9 seconds remaining.

Hankins hit one of two free throws at the other end, and Paschall tipped in a miss by Booth to tie it at 58 with 7.6 seconds to go.

Marshall was called for a questionable charge as he tried to win it with a floater, but he intercepted Villanova's inbounds pass at halfcourt with 1.6 seconds left and missed a desperation heave at the buzzer, sending this one to overtime.

Scruggs, who came in averaging 12.1 points per game, scored 15 in the first half. He made all five shots from the field, banking in a fortuitous 3 from the left corner high off the glass, to help Xavier build a 34-28 lead at the break.

"They were playing as well as anybody in the conference coming down the stretch, and we knew it," Wright said. "This was no surprise at all."

Xavier: Despite a late push, it appears the Musketeers will miss the NCAA Tournament after making five consecutive appearances and 12 in the past 13 years. They were a No. 1 seed last year, but got off to a slow start this season under Steele and had a six-game losing streak in the middle of Big East play. "If you see how we've been playing over the last month or so, we're a top-30 team in college basketball for sure," Steele said. "We're a team that can advance. There's no doubt about it."

Villanova: Improved to 13-2 in the Big East Tournament since the 2013-14 realignment. The Wildcats are in the championship game for the 10th time, tying Connecticut for third-most behind Syracuse (15) and Georgetown (13). Syracuse (1986-90) is the only other school to make it five straight years.

Xavier: Will hope for a postseason bid Sunday, perhaps to the NIT.