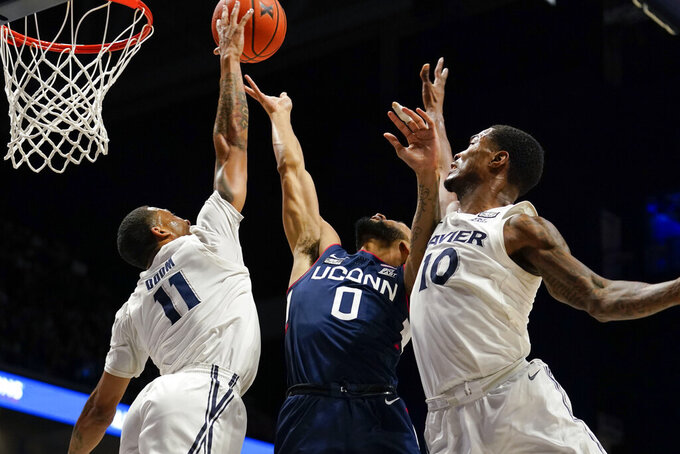 CINCINNATI (AP) — Jack Nunge had 22 points and nine rebounds, and No. 25 Xavier snapped a two-game losing streak with a 74-68 victory over No. 24 Connecticut on Friday night.

“UConn’s as talented as any team we’ve played all year," Musketeers head coach Travis Steele said. "If we do what we’re supposed to do, we can compete with anyone. This is great for our confidence moving forward.”

“We lost the game with our defense on Nunge (and) not guarding (Paul) Scruggs off the dribble to start the second half,” UConn head coach Dan Hurley said.

The game, originally scheduled for Dec. 28, was postponed due to COVID-19 issues in the UConn program.

Both teams have been plagued recently by slow offensive starts, especially Xavier, which trailed at halftime in seven of its previous eight games.

But the Musketeers raced to a rare halftime lead on Friday, helped by Johnson's buzzer-beating 3-pointer which put them ahead 34-31. Johnson had 10 points in the first half.

Cole and Sanogo each picked up two early fouls and played a combined 18 minutes in the first half.

“I thought they were brutal calls in the first half,” Hurley said. “That's not why we had the deficit at the half. But yeah, what a joke.”

Scruggs and Zach Freemantle, who were scoreless in the first half, combined for 15 points to help the Musketeers extend their lead to 54-46 with 9:50 left. Scruggs finished with nine points.

“Paul (Scruggs) was getting to the rim," Steele said. "We were getting UConn in rotation, which would open up the lane for drives. Our guys did a nice job of taking what the defense gave us.”

The Musketeers led by as many as 10 points in the second half before the Huskies got within three points with 30 seconds remaining. But, Xavier held on.

“I felt like this was a huge momentum game for us, and we needed it,” said Xavier guard Colby Jones, who had six assists.

The Musketeers played without their second-leading 3-point shooter, Adam Kunkel, who was sidelined by illness not related to COVID-19, according to Steele.

The Huskies' head coach wasn't pleased with a few calls in the first half that led to early foul trouble for his team. Late in the second half, Hurley and Huskies guard Andre Jackson received technical fouls less than a minute apart.

“I see a lot of coaches in the ear of the officials, and I didn't think there was anything there that warranted a technical,” Hurley said. “So I will be calling up our head of officials, because I want an explanation on that.”

UConn: The Huskies snapped a two-game losing streak with a win over No. 18 Marquette on Tuesday to begin a stretch of four games in nine days, three on the road. But they couldn't build off that momentum. “The Big East is a hard league to get momentum in,” Hurley said. “It's really easy to fall into losing streaks and very hard to stack wins.”

Xavier: After losing two straight games, and four of their previous six, including a bad loss at home to DePaul, the Musketeers needed a win to get back on track and get above .500 in the Big East. “Everybody in the locker room, we believe we have a great team. We just have to go out there and show it,” said Nunge.