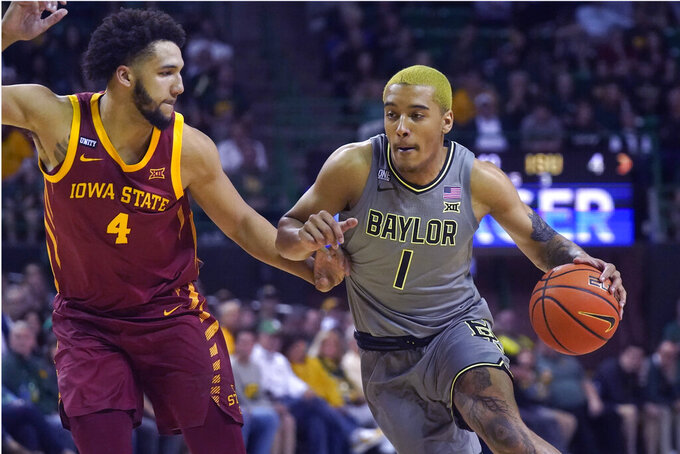 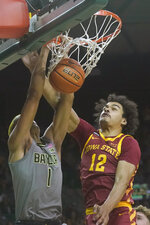 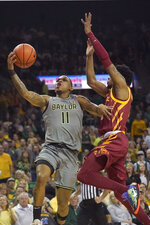 WACO, Texas (AP) — The confetti rained down after third-ranked Baylor repeated as Big 12 champions with a much different group than a year ago, when the Bears went on to win their first national championship.

Akinjo scored 20 points, including the go-ahead 3-pointer with 3:37 left, and the Bears beat Iowa State 75-68 on Saturday night to clinch a share of the Big 12 title. Baylor had fallen behind after building a 25-point lead in the game’s first 12 minutes.

“We learned that we're tough, and we're resilient," said Akinjo, who was Arizona's leading scorer last season after previously playing at Georgetown.

“With all the injuries and things we’ve had to overcome this year, and it’s really hard to win a game when you know that if you win, you’re a champion," coach Scott Drew said. "And if you lose, everything that you worked for was for naught, basically.”

Big man Flo Thamba was the only starter back for Baylor, though he was interchangeable with fellow returning forward Jonathan Tchamwa Tchatchoua, the player known as “Everyday Jon" who suffered a season-ending knee injury last month. The Bears started this season without talented and selfless pro-bound guards All-American Jared Butler, Davion Mitchell and MaCio Teague. Forward Mark Vital also left after five seasons.

Brown had 16 points, 10 rebounds and a huge block. Adam Flagler scored 13 points for Baylor and Sochan 12.

Gabe Kalscheur had 18 points for Iowa State (20-11, 7-11), which went from trailing 29-4 at the under-eight timeout in the first half to a 60-58 lead just before that same timeout in the second half. The Cyclones got back-to-back 3s from Tyrese Hunter and Caleb Grill before turning Baylor's turnover into a go-ahead layup by Aljaz Kunc.

That was a 56-29 spurt for the Cyclones, who were coming off a 53-36 loss to Oklahoma State in their home finale that snapped a four-game winning streak.

“We just came out flat and they stomped us right away. So I mean it was hard coming back and fighting back, but we did it,” Kalscheur said. “That’s something for us to be proud about.”

The game was tied at 62 for nearly three minutes before Kalscheur made a tiebreaking jumper with 3:52 left to end a span when both teams missed four shots and each missed free throws in one-plus-one situations. It was in that span that Brown blocked a driving Robert Jones before Sochan drew a charge against the Cyclones big man.

Baylor then went ahead to stay on the long 3 by Akinjo, and he added a driving reverse layup after Brown rebounded a missed free throw by Thamba.

The Bears were out to a 23-4 lead midway through the first half of their game, and had just scored the 16th of 22 consecutive points on a free throw by Sochan, when Kansas wrapped up its 70-63 overtime win at home over No. 21 Texas. Baylor and Kansas split their two meetings, including the Bears winning 80-70 at home a week ago.

Kansas will be the No. 1 seed in next week's Big 12 tournament in Kansas City, Missouri, because the Jayhawks split their games with third-place Texas Tech. The Bears lost both of their games to the 12th-ranked Red Raiders.

Jones had a season-high 12 points for Iowa State, three layups and a dunk in an 85-second to end his team's early long shooting drought. Izaiah Brockington had 11 points and freshman Hunter had 13 assists.

Iowa State: Despite consecutive losses to end the regular season, the Cyclones' 20 wins are already a plus-18 turnaround from last season. That is a school record and the most ever for a Big 12 team with a first-year coach. (T.J. Otzelberger). ... Iowa State shot 47.5% overall from the field, remarkable considering 14 missed shots in a row over a span of 8 1/2 minutes when falling behind in the first half.

Baylor: The Bears played their 308th game hey played 122 for him before for getting ranked. ... They are 42-8 the past two seasons, the best record among major conference teams.

The Big 12 tournament in Kansas City, with both playing Thursday. Baylor will play Oklahoma in the first game of the night session, followed by Iowa State taking on Texas Tech.