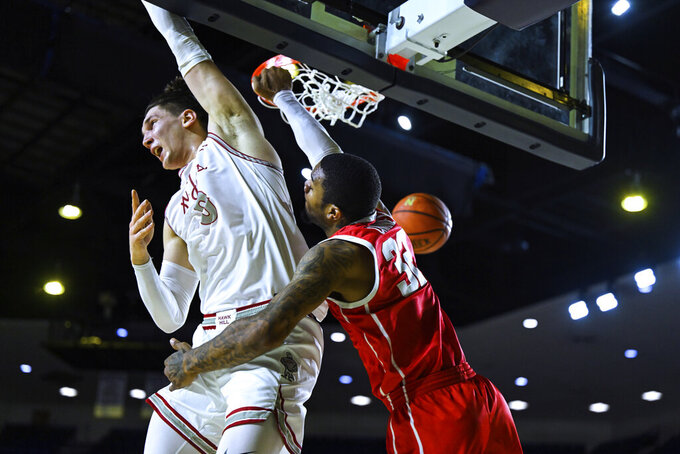 J’Wan Roberts added 19 points and 12 rebounds for the Cougars (2-0), who have yet to trail this season.

Houston’s biggest obstacle was the slick floor conditions that emerged in the first half and eventually forced a brief delay in the second half. At nearly every stoppage of play after the break, team managers, security personnel and ball boys were tasked with wiping the floor in several locations.

Erik Reynolds II scored a team-high 17 points for Saint Joseph’s (0-1), which lost in coach Billy Lange’s first game at Alumni Hall since concluding a seven-season stint at Navy in 2011.

Lange said he did not believe the second-half departures of guard Cameron Brown and forward Rasheer Fleming were related to the floor. Brown experienced cramping after colliding with a defender on a layup attempt. Fleming landed on someone’s foot after going up for an offensive rebound. Neither player returned.

Lange said he wanted to complete the game to ensure the Cougars were credited with a victory.

“To postpone a game when a team’s up 26 points, they’re going to win the game,” Lange said. “They’re a national championship-aspiration program, and that’s real this year. It’s very, very real.

"To play and not get a win, I just thought it was not the right decision to make. And I think we’re going to be good, so it could end up being a really quality win for them.”

Houston bolted to leads of 12-2 and 34-11 and was never seriously threatened. The Cougars held a 15-1 advantage in points off turnovers in the first half and took a 46-26 lead into the break.

Walker shot 10 of 14 from the floor and grabbed eight rebounds in his second career game after scoring eight points on 3 of 14 shooting in Monday’s rout of Northern Colorado.

“He had 23 points tonight,” Sampson said. “That’s great. I don’t think anybody in our program is going to ask for his autograph because of that. He had eight rebounds, but how about getting 18 rebounds? Because he’s capable. We’re just going to keep challenging our guys. I don’t want them to ever be satisfied.”

Houston: In what is likely to become a frequent refrain this season, the Cougars overwhelmed an opponent with their length and athleticism on defense and their crisp passing at the offensive end.

Saint Joseph’s: The Hawks have six newcomers, and this was a difficult way for a relatively inexperienced roster to begin the season. Saint Joseph’s was picked to finish 13th in the 15-team Atlantic 10, and has some work to do before conference play begins Dec. 31.

With a pair of victories this week, Houston will remain in the top five for another week. Its first high-profile test awaits Nov. 20 at No. 21 Oregon.