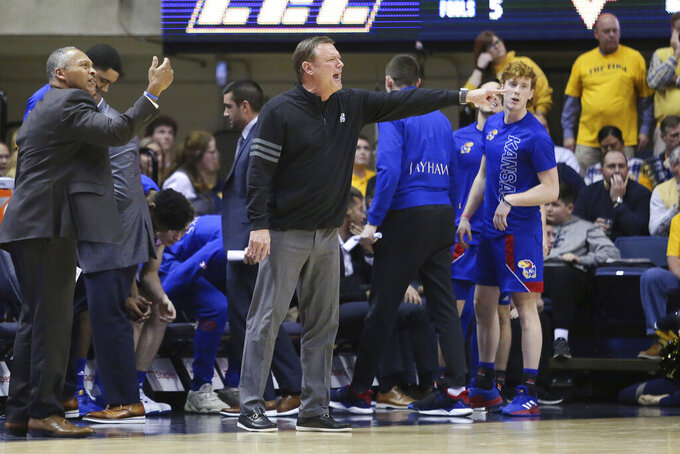 Kansas coach Bill Self reacts to a call during the second half of the team's NCAA college basketball game against West Virginia on Wednesday, Feb. 12, 2020, in Morgantown, W.Va. (AP Photo/Kathleen Batten)

Devon Dotson scored 11 of his 15 points after halftime, Isaiah Moss had seven of his 13 points during a second-half burst and the third-ranked Jayhawks finished the game with a 9-0 run to beat the 14th-ranked Mountaineers 58-49 on Wednesday night.

“This was not artistic at all,” Kansas coach Bill Self said. "It was a grind-it-out, tough road win that you have sometimes when you’re going through your second round of conference (play). That was a really good road win for us.”

West Virginia (18-6, 6-5) fell flat in the end after leading by as many as nine points in each half and lost at home for the first time this season.

West Virginia has the Big 12's best defense in terms of field-goal percentage, but it was Kansas that hunkered down on defense when it mattered. Kansas' Marcus Garrett had four of his five steals over the final seven minutes.

“He just took guys with the game on the line and had three steals in a row on three consecutive possessions,” Self said. "He’s unbelievable defensively. I thought he controlled the game on that end.”

West Virginia is stumbling after rising as high as No. 12 in the AP Top 25 last month. It has lost two straight with another big test coming up Saturday at No. 1 Baylor.

Several turnovers and poor shot choices by West Virginia allowed Kansas to forge ahead for good. The Mountaineers scored just one point and failed to hit a field goal over the final six minutes.

In the key final minutes, Kansas “got the loose balls,” West Virginia coach Bob Huggins said. “Every ball that got tipped in the air on a rebound, they got. They beat us to the ball.”

The Jayhawks had lost in five of their previous seven trips to Morgantown. Moss said the Jayhawks knew this one was going to be another tough test.

It took some time, but Moss and Kansas finally did.

“We won the game, but I don’t know if we would have won unless Isaiah was in the game," Self said. "He really helped us.”

West Virginia held a significant rebounding advantage and dominated the offensive glass in both of its meetings with Kansas. The Jayhawks made the most of a season-low 45 shot attempts Wednesday.

After the two previous games, Huggins criticized his young team, which includes a freshman and three sophomore starters, for lacking motivation, the proper attitude and attention to coaching instructions.

The Mountaineers came out strong in the first half Wednesday but were held to their lowest point production of the season. For the second time in three games they committed 19 turnovers and shot below 32% from the floor.

Freshman Oscar Tshiebwe held Kansas 7-footer Udoka Azubuike to nine points and seven rebounds, both under his season averages. But Tshiebwe, who led the Mountaineers with 14 points and nine rebounds, was limited to two points after halftime. West Virginia's Jordan McCabe tied a season high with 10 points.

“We know the things we need to do better,” McCabe said. "That’s our job, to get right back at it tomorrow.”

Kansas: The Jayhawks earned a hard-to-get win in Morgantown and have taken eight of the last nine meetings against the Mountaineers.

West Virginia: The Mountaineers are in danger of losing a very high seeding in the NCAA Tournament. Last week, the NCAA penciled in West Virginia as a No. 2 seed.

Huggins missed another chance to tie North Carolina’s Dean Smith for sixth among Division I coaches with 879 victories.

Kansas hosts Oklahoma on Saturday. The Jayhawks beat the Sooners 66-52 on Jan. 14 in Norman, Oklahoma.

West Virginia has its first matchup of the season with Baylor on Saturday in Waco, Texas. The Mountaineers have dropped three straight on the road.