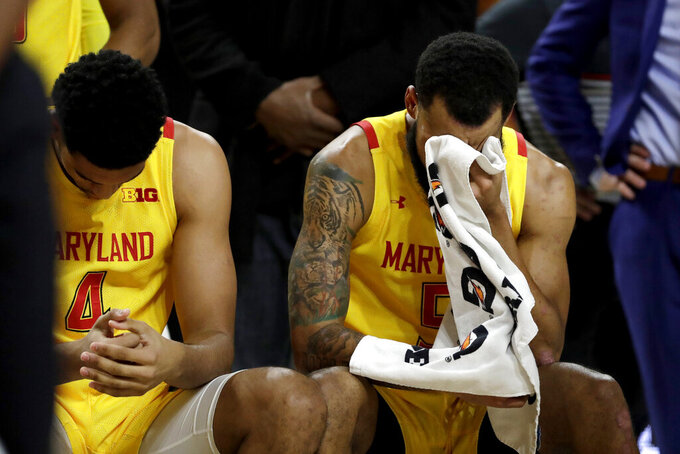 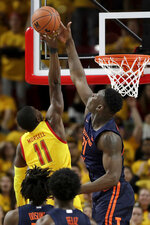 COLLEGE PARK, Md. (AP) — No. 3 Maryland couldn’t help but like the way its Big Ten opener against Illinois ended.

How the Terrapins got there — not so great.

Anthony Cowan Jr. hit a tying 3-pointer in the final 20 seconds and a go-ahead free throw with 2.1 seconds left as Maryland rallied from a 15-point deficit for a 59-58 victory Saturday.

“We have to be better,” Cowan said. “We obviously didn’t play our best game. We’re here to win a championship. This is a good win. Not to take anything away from Illinois, they played a great game."

“That one was one hard,” Illinois coach Brad Underwood said. “I’m not going to lie.”

Illinois led 39-25 at halftime and briefly pushed its lead to 15 in the second half, but Maryland gradually narrowed the deficit.

Donta Scott's basket with 1:45 remaining got Maryland within 57-55, and Frazier split two free throws 2 seconds later. It remained a three-point game until Cowan hit a deep 3-pointer with 19 seconds remaining.

“Right when he shot it, it looked perfect,” Maryland coach Mark Turgeon said. “I knew it was in, and that’s just kind of what he does.”

Illinois played for the final possession, but guard Andres Feliz turned it over and fouled Cowan in the ensuing scrum. Cowan made the first free throw and missed the second, and the Illini failed to get a shot off in the remaining time.

The 14-point halftime hole was the largest Maryland has erased since coming back from a 15-point deficit at the break in an 80-78 defeat of Bucknell on Nov. 18, 2017.

“The basketball gods were obviously on our side,” Turgeon said. “It was kind of a miracle win. We weren’t very good. I wasn’t very good. And we weren’t ready to play, and they were.”

Illinois: After allowing Miami to shoot 59.3% while dropping an 81-79 decision Monday, the Illini were far sharper on defense, and Underwood left disappointed with the loss but upbeat about his team’s long-term prospects.

“I could not be prouder of my guys,” Underwood said. “There were a lot of tears in there. There was a lot of hurt, and that makes me feel good. I know we’re on the right page. ... We grew up a lot tonight.”

Maryland: The Terps won for the fifth time in 10 days and have beaten Marquette, Notre Dame and Illinois in a seven-day span. The schedule slows in the coming weeks; Maryland plays just three times in the next 27 days.

Maryland avoided joining No. 4 Michigan, No. 5 Virginia and No. 7 North Carolina as highly ranked teams to stumble this week. The Terps will likely remain in the top three when the next poll is released Monday.

The game unfolded in similar fashion to the last time Underwood coached in this building on Dec. 3, 2016. His Oklahoma State team held a 12-point lead on the Terps in the second half, only for Maryland to rally to earn a 71-70 victory on Melo Trimble's two free throws with 9.4 seconds to go.

Illinois: The Illini host Michigan on Wednesday for their Big Ten home opener. Illinois has lost four in a row and 14 of 16 to the Wolverines.

Maryland: The Terrapins travel Tuesday to Penn State, where they have lost in each of the last three seasons.