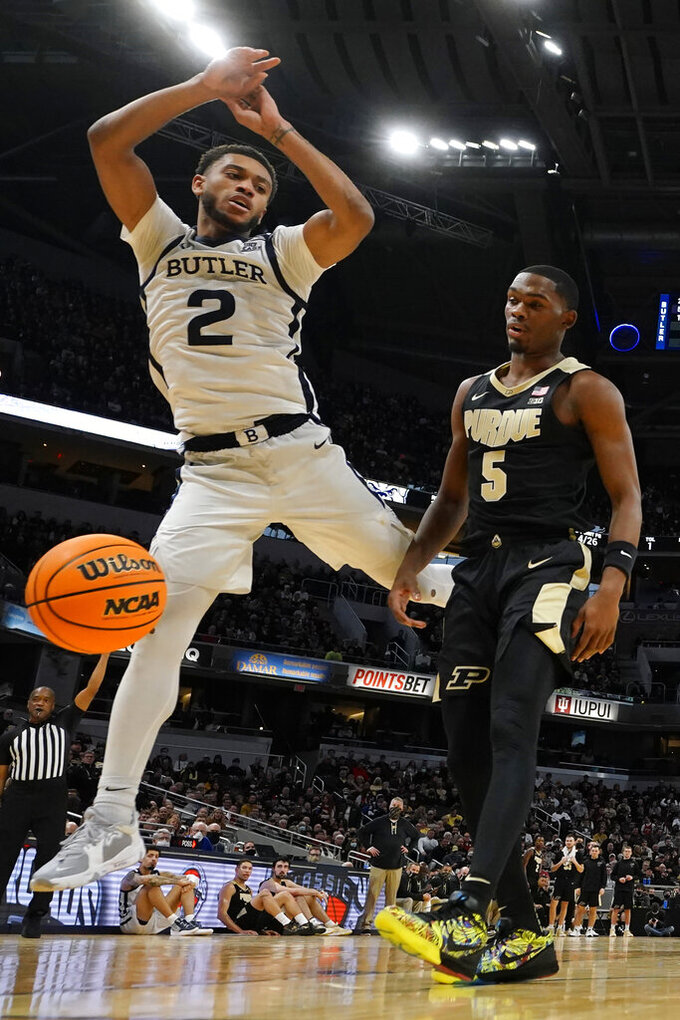 Butler guard Aaron Thompson (2) loses the ball out of bounds ahead of Purdue guard Brandon Newman (5) during the second half of an NCAA college basketball game, Saturday, Dec. 18, 2021, in Indianapolis. (AP Photo/AJ Mast)

If anything, it made the Boilermakers even more dangerous.

Edey came off the bench for the first time this season, posted a double-double in the first half, and his presence helped open up the Boilermakers' 3-pointers in a 77-48 rout over Butler at the Crossroads Classic.

”We've got 10 guys that can start for us, but they want to finish more than anything," coach Matt Painter said, explaining the move. “Zach has had some struggles starting the game. The way Trevion played (against) North Carolina State, that factor is the reason for the decision. Trevion’s ability to pass can maybe help a couple of those guys starting."

Jaden Ivey took advantage by making all six 3-point attempts and finishing with 22 points. Edey wound up with 14 points, 11 rebounds and two blocks while Williams, a preseason All-American, had 10 points and six rebounds in his first start this season.

The lineup change came after the Boilermakers (10-1) endured a rough week — losing to Rutgers in its first game after climbing to No. 1 before needing overtime to beat North Carolina State. Then came a weeklong break for finals.

But instead of looking stale, Purdue remained focused. It reverted to its dominant early-season form and produced, perhaps, its most impressive victory all season.

“You've got to play well and we did not. They had a lot to do with that," Bulldogs coach LaVall Jordan said. “They’ve cornered the market on elite size, and they’ve all gotten better and developed over time. It’s hard to keep them away from the basket."

Despite getting 17 points from Bryce Golden and 11 from Jayden Taylor with 11, the Bulldogs didn't have nearly enough to contend with their cross-state rival.

It didn't take Williams or his teammates long to exploit the size discrepancy. Williams opened the game with Purdue's first two baskets and Edey scored six points in a 10-0 run that gave Purdue a 34-16 lead late in the first half.

Butler (7-4) never recovered and when the Bulldogs tried to make second-half adjustments, that didn't work, either.

Ivey and Sasha Stefanovic strung together a 3-point barrage that extended the lead to as much as 36.

“Last week, I didn’t think we were able to bring a physical presence on defense," Ivey said. “I feel like today we brought it, and we’re going to need that going into those Big Ten games. We just need to be tight defensively. I was confident today, taking rhythm shots. I’m just thankful for my teammates putting the ball in my hand."

Butler: The Bulldogs wound up scoring their fewest points this season while shooting a season-low 14.3% on 3s. But the problems went far deeper than numbers. Yes, Butler, like many teams, struggled with Purdue's post play, but it also appeared timid in attacking the basket. Coach LaVall Jordan knows that must change.

Purdue: The Boilermakers delivered their most complete performance of the season. They dominated offensively, played lockdown defense, moved the ball nimbly and pulled away once they took control. When Purdue plays this way, it just might be the best team in the nation.

The Crossroads Classic started in 2011 as a showcase event featuring the state's four most prominent basketball schools — Indiana, Purdue, Butler and Notre Dame. In July, organizers announced the December doubleheader would end. Indiana started the day with the best record at 7-3. Butler's 6-5 mark will go down as second best, with Purdue going 4-7 after starting 0-5. Notre Dame was 4-6 heading into Saturday's second game.

Purdue: Has a quick turnaround, hosting Incarnate Word on Monday.