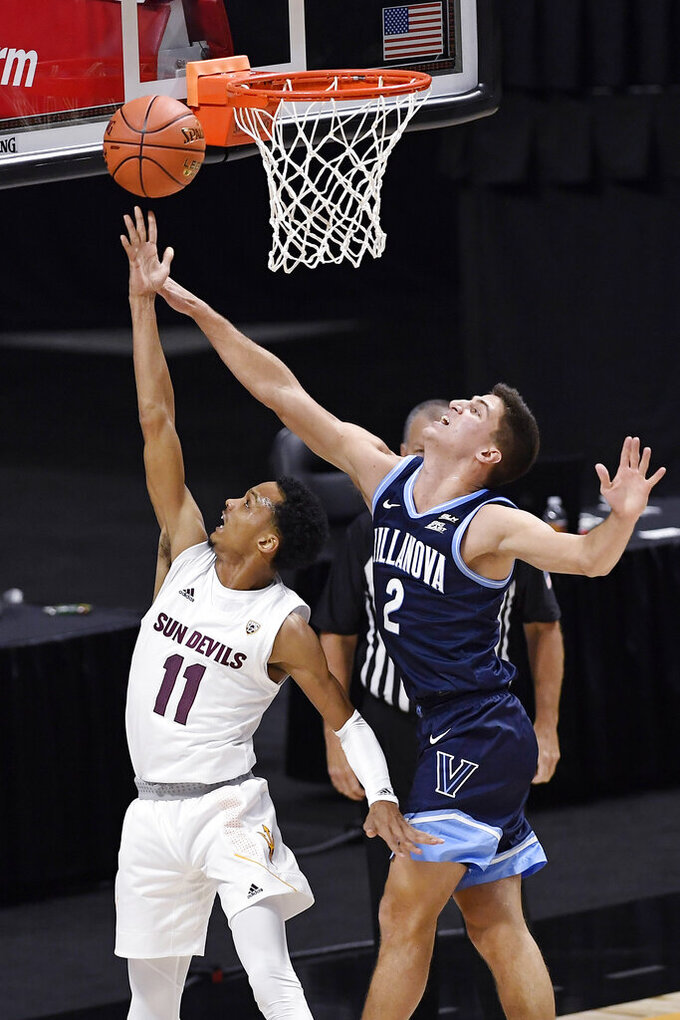 After two games, Wright thinks Jeremiah Robinson-Earl may have answered that question for him.

Robinson-Earl followed up an 18-point performance in the season opener with a career-high 28 points on Thursday night to lead No. 3 Villanova over No. 18 Arizona State 83-74 in the championship game of the Empire Classic.

The 6-foot-9 sophomore forward hit 11 of his 17 shots and pulled down eight rebounds.

Justin Moore added 16 points and 12 boards for the Wildcats (2-0), and Caleb Daniels chipped in with 14 points — 10 in the second half. Daniels spent the final eight minutes of the first half on the bench after picking up his third foul, but wasn't whistled again.

The Wildcats dictated the pace of the game and dominated on the glass, outrebounding Arizona State 43-27.

The Wildcats led by nine at halftime and took their first double-digit lead at 49-38 on a 3-pointer by Robinson-Earl that capped an 8-0 spurt in the second half.

They stretched that to 66-49 on a 3 by Daniels before ASU made a little run.

The Sun Devils cut the deficit to 70-60 on a jumper by Verge, but couldn't come all the way back.

The game, played as part of the 11-day “Bubbleville” event in Connecticut, was close early. Villanova led just 31-29 after a 3-pointer by Martin.

“We’re kind of a new team in a way with Saddiq leaving,” Robinson-Earl said. “Guys from last year are getting new roles, so we’re just learning as we’re going.”

Villanova: The Wildcats consistently created easy shots in their half-court offense by backing ASU players into the lane.

Arizona State: The Sun Devils got in the lane early, hitting their first five shots. But they had a hard time getting into their transition game and had just 11 fast-break points. Christopher, the program's highest-rated recruit since James Harden, made 11 of his 17 shots.

“I think he showed you a glimpse of what he's capable of,” ASU coach Bobby Hurley said. “It was just a heck of a performance by a freshman, playing against one of the best teams in the country.”

STAT OF THE DAY

Martin, who had 26 points in a 94-88 win over Rhode Island on Wednesday, took just two shots in the second half, missing both of them. He also had only two assists in the game and one steal.

Both teams were without players who are expected to play key roles this season. Villanova forward Dhamir Cosby-Roundtree has a shin injury and guard Bryan Antoine missed the trip to Mohegan Sun to more fully recover after re-injuring his right shoulder last month. Arizona State forward Kimani Lawrence is still recovering from a preseason knee injury.

Villanova heads back to Philadelphia to play Saint Joseph's on Monday night. The Wildcats had also been scheduled to face Temple in a week, but the Owls have paused all team activities for 14 days because of a positive coronavirus test.