No. 3 Villanova gets back on the floor after COVID-19 pauses 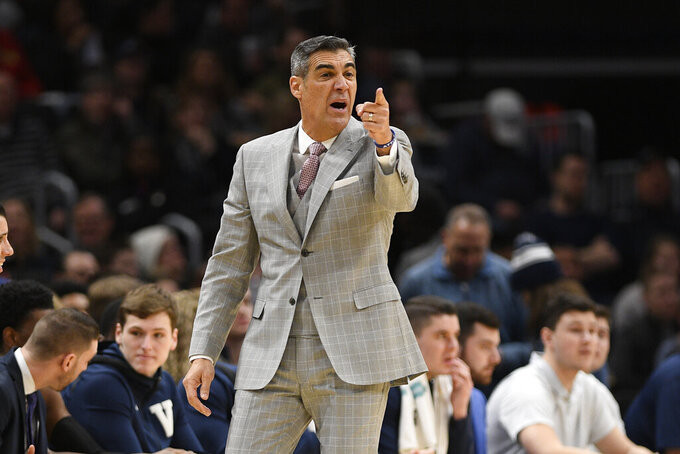 FILE - Villanova head coach Jay Wright gestures during the first half of an NCAA college basketball game against Georgetown in Washington, in this Saturday, March 7, 2020, file photo. Villanova coach Jay Wright was set to return to practice Tuesday following his bout with COVID-19. Those plans are on hold after two players tested positive Monday, Jan. 4, 2021, and the Wildcats were forced to postpone their next three games. (AP Photo/Nick Wass, File)

Welcome back to the floor, Villanova.

The third-ranked Wildcats have not played a game since Dec. 23 because of positive COVID-19 tests that ensnared coach Jay Wright and several other Tier 1 program members. But after having six games postponed following its win over Marquette, Villanova is set to play twice this week beginning with a game against Seton Hall on Tuesday night.

“Everybody has dealt with this,” Wright said over the weekend. "We know this week we are playing Tuesday and Saturday (against Providence). That is about it. With Georgetown having gone down now, the Big East is looking at every option we can possibly have to look at our schedule going forward.”

The first pause for the Wildcats (8-1, 3-0) came when the team returned from Christmas. They were cleared to practice on Jan. 3, only for another series of positive tests to arrive the following day. They weren't allowed to practice again until last Thursday, though recent tests have been clear and their games this week look promising.

“These guys impress me so much with their resiliency,” Wright said. “One of the things we have learned going through this quarantine is that the day the positive tests hit you — and you know what’s coming — those days are just devastating. Sitting alone in your room is horrifying. It really is."

The Wildcats may be healthy when it comes to COVID-19, but not when it comes to more traditional ailments. Caleb Daniels hurt his calf and Eric Dixon his Achilles tendon in their one practice between quarantines. The status of Daniels remains in flux, but Wright said he “would guess (Dixon) could be in good shape for Tuesday."

Sophomore guard Bryan Antoine, who has yet to play this season due to a shoulder injury that he sustained in October, has also returned to practice. Wright said he's trying to get up to speed but should also be available against Seton Hall.

Gonzaga and Baylor have been atop the men's basketball poll all season, and the Bulldogs appear to have mere speedbumps the rest of the way — their toughest remaining game is their regular-season finale against BYU.

The Bears, on the other hand, began a daunting six-week grind against ninth-ranked Kansas on Monday night. They still have to visit No. 5 Texas, they have a three-game stretch against No. 12 Texas Tech and No. 14 West Virginia twice, and they face the Jayhawks again in their regular-season finale Feb. 27 in Allen Fieldhouse.

There are three games involving ranked teams on Saturday. No. 17 Missouri heads to sixth-ranked Tennessee, No. 13 Connecticut visits No. 11 Creighton and No. 15 Ohio State travels to No. 10 Wisconsin. Another one would have been Duke against Louisville, but they were the two teams to fall out of the rankings this week.

HOUSTON, WE HAVE NO PROBLEM

The Cougars jumped to No. 8 in this week's poll after beating Central Florida for their fourth straight win. Now, they can avenge their only loss when they face Tulsa on Wednesday night. Houston caps the week against struggling Cincinnati.

Alabama catapulted into the Top 25 at No. 18 this week, and now coach Nate Oates and his team have a chance to prove they belong. They face LSU, which has just one loss in SEC play, on the road Tuesday night before facing Mississippi State — which has already beaten No. 17 Missouri — at home on Saturday night.