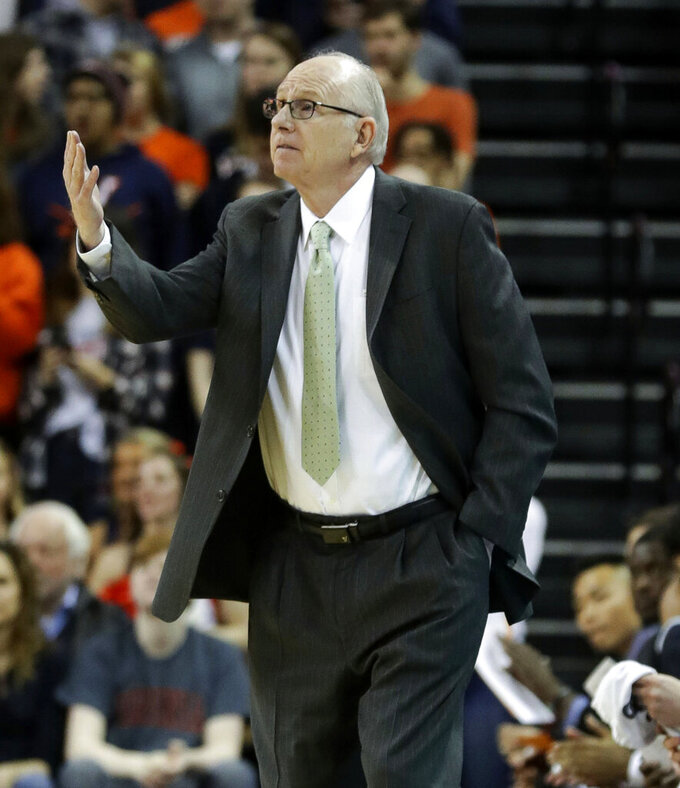 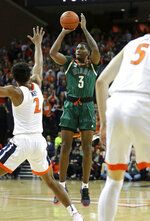 CHARLOTTESVILLE, Va. (AP) — Virginia was sloppy at times for the second game in a row. The way they play defense, the No. 3 Cavaliers have some room for error.

De'Andre Hunter scored 14 points, Mamadi Diakite had 11 points and three blocks, and the Cavaliers locked down on defense again to beat Miami 56-46 on Saturday. Kyle Guy added 10 points on just 4-for-15 shooting for the Cavaliers (20-1, 8-1 Atlantic Coast Conference), who played without point guard and third-leading scorer Ty Jerome because of a sore back.

"It felt a little off," Guy said of playing without Jerome, "but I think it was a good test for our guys to try to fight through that."

Virginia had 14 turnovers one game after having 16 in an overtime victory against North Carolina State.

"We were unsound the last two games," coach Tony Bennett said, "and of course Ty helps us with that and his absence certainly showed. It was invaluable experience for all our guys to play in that."

Chris Lykes scored 16 points to lead the Hurricanes (9-12, 1-8), who lost their fifth in a row. Zach Johnson and Sam Waardenburg each added 10, but Miami became the ninth team held below 50 points by the Cavaliers this season. The Hurricanes entered averaging 74.4 points per game, and, Bennett said, "missed an awful lot of wide-open looks."

Virginia used a 9-0 run in the first half to take an 18-11 lead and never trailed again. The Cavaliers built the lead to 13 but had trouble gaining more separation as they shot just 42.3 percent (22 of 52).

"We did a pretty good job defensively. We were just not able to make, I think, some very makeable shots," Hurricanes coach Jim Larranaga said. "I always tell the team (when) you play Virginia, it's the first team to 50 that wins, and they got to 50 before we did."

Diakite now has 11 blocks in his past three games. Braxton Key added two blocks and Hunter had one for the Cavaliers.

"I am just trying to have fun there," Diakite said. "I just like having fun blocking shots when I have a window."

Several of Virginia's blocks came close to the rim.

Virginia: Freshman Kihei Clark played almost the entire game in place of Jerome and led the Cavaliers with six assists but also committed six turnovers. Virginia turned the ball twice as often as Miami, but still managed to outscore the Hurricanes 8-4 off those takeaways.

Virginia: The Cavaliers have the next two days off and will face No 2 Duke next Saturday at home.