No. 4 Arizona rolls past rival Arizona State for 91-79 win 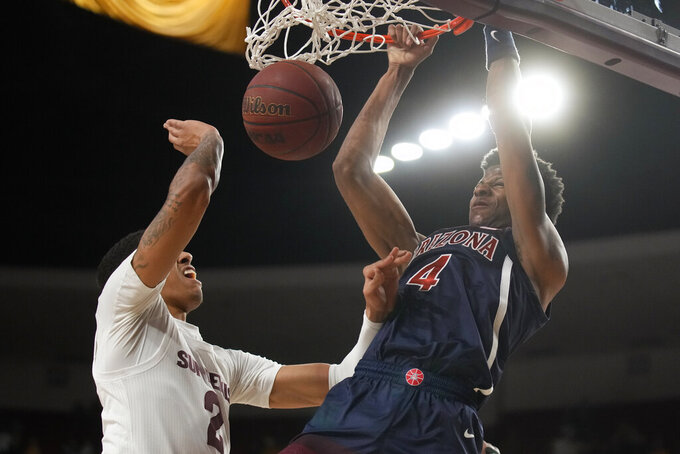 TEMPE, Ariz. (AP) — Oumar Ballo came off the bench on Monday night and immediately did what he does best — use his massive 7-foot, 260-pound body to snag rebounds, score points and generally cause havoc in the paint.

The Arizona Wildcats have a lot of strengths this season. One of the biggest is that they're just plain strong.

Azoulas Tubelis had 19 points and 11 rebounds, Ballo added a crucial 13 points and 10 rebounds, and No. 4 Arizona pulled away in the second half for a 91-79 win over rival Arizona State.

“Just thinking about (Ballo's) last couple weeks, it's been special,” Arizona coach Tommy Lloyd said. “Now we're counting on him to do those things. Before, we were hoping.”

That's about the time Lloyd turned to Ballo.

“He was telling me to go and change the game," Ballo said. “He didn’t like the way we were playing.”

Ballo played big, as did fellow reserve Pelle Larsson, who scored 14 points on 5-of-5 shooting, including 3 of 3 on 3-pointers. The Wildcats swept the regular-season series with their in-state rival after their 67-56 win at home on Jan. 29.

“I credit Arizona, they were really good tonight,” Arizona State coach Bobby Hurley said. “We played the first seven minutes very well ... after that, we were kind of overmatched in a lot of ways.”

Arizona led by four points at halftime and got off to a good start in the second when Kerr Kriisa made a quick 3-pointer. It was the beginning of a game-altering push for the Wildcats, who jumped to a 49-38 advantage and never trailed again.

Back-to-back powerful dunks by Christian Koloko and Dalen Terry capped a 15-4 Arizona run to open the second half. Bennedict Mathurin finished with 18 points, helping the Wildcats pour in 51 points after halftime.

The Sun Devils were coming off a thrilling triple-overtime win over No. 3 UCLA on Saturday, and started with a 14-1 lead by making four quick 3-pointers, including two from D.J. Horne.

“They punched us, man,” Lloyd said. “The game was physical from the tip and our guys weren't ready to go. So we had to lock in and you know what, I'm really proud of them. That's a gut check win in a tough environment.”

The Wildcats weren't down for long. They responded with an 11-0 run and took a 40-36 lead into halftime.

Ballo did a superb job of filling in for Koloko, who spent a big chunk of the first half on the bench in foul trouble. Ballo had seven points and eight rebounds before the break.

Arizona: Had a slow start but quickly recovered, showing why it's among the top teams in the Pac-12 and the nation. The good performance from Ballo was particularly promising. The big man has played better as the season's progressed and is averaging about eight points per game in Pac-12 play.

Lloyd even occasionally played Ballo with the 7-foot-1 Koloko, which gives the Wildcats one of the tallest frontcourts in the country. He can combine those two with the 6-foot-11 Tubelis, forming what the coach likes to call his “super-size” lineup.

Arizona: At Washington State on Thursday.

Arizona State: At Washington on Thursday.